We Finns dump an incredible amount of food into biowaste. Why don't we eat it? 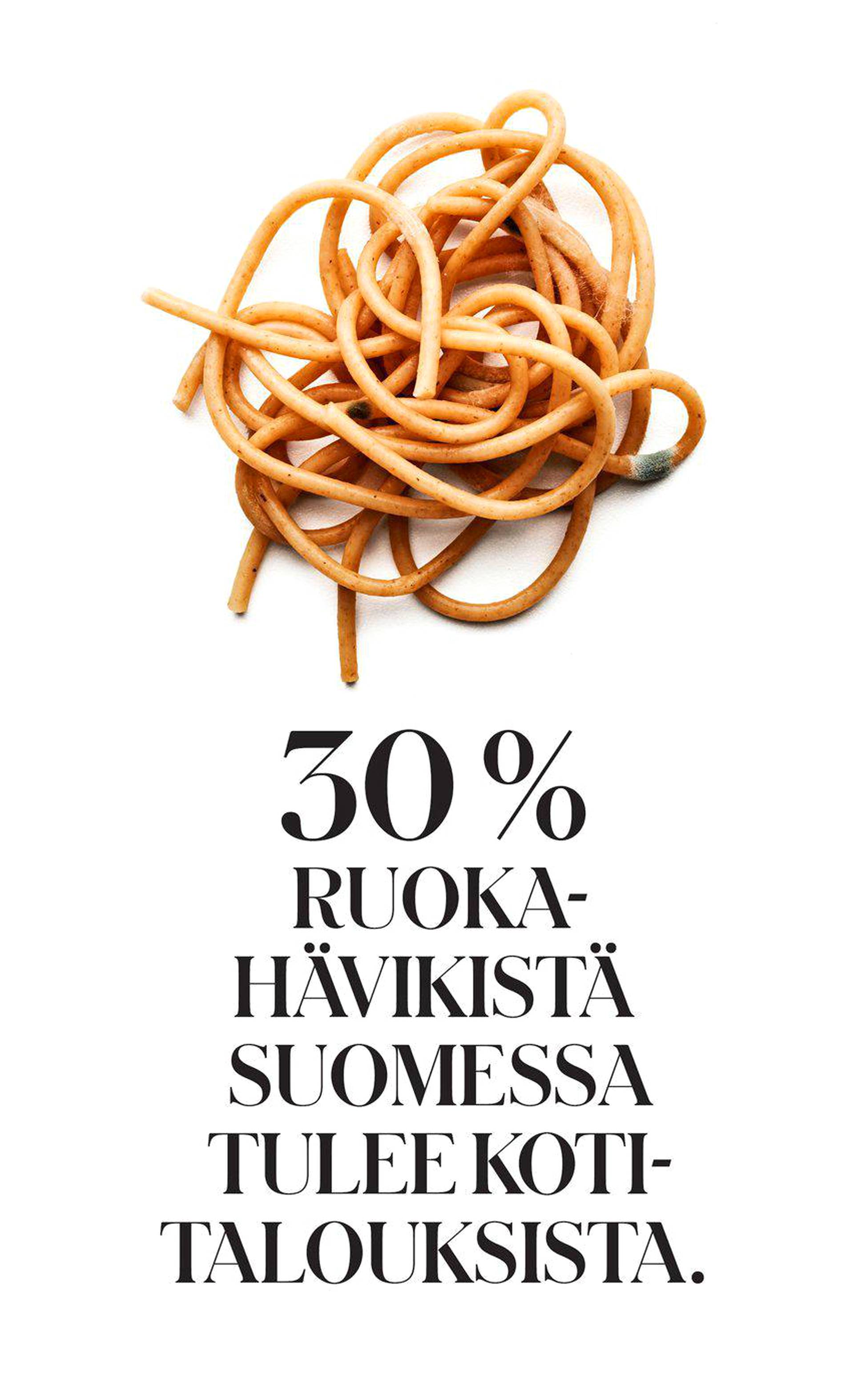 I stare at the stinking kit of the compost bucket.

It’s again halfway food that should have been eaten.

On top of the magnificence lies a yellow pile.

I was excited to buy vegan cheese from a convenience store.

I wanted to test whether it would be a substitute for cheese.

I tried on a couple of occasions to eat a cheap margarine smelling cheese-assumed, but I couldn’t.

I hate throwing away all the food.

I am the human seagull who eats even at the risk of colic leftovers, if they threaten to go empty exercise.

Still, our family of four produces so much biowaste that the compost bag has to be taken out several times a week.

Every beak is a waste.

Food makes a long and multi-stage journey from the field to the refrigerator.

If I throw it away, a huge amount of work, resources and money will be wasted.

Then all the environmental damage of food production has also arisen in vain.

So where does this sin of loss come from?

When I come home from work on Monday night, the remains of children’s morning breads are still waiting on the kitchen table.

During the day, they have hardened to be inedible.

One and a half pieces of bread go directly into the compost bucket.

Everyone who has ever fed children is likely to recognize the phenomenon.

Adults are usually better able to predict how much they will eat than children.

My family’s breadcrumbs matter, as most, 30 percent, of food waste in Finland comes from households.

According to research, Finns throw away 120–160 million kilos of food every year, which could have been eaten if it had only been stored and prepared differently or if its use had been better planned.

In total, about five percent of food purchased for homes is wasted.

Most of the home food left on the plate or pot is thrown away, then vegetables and roots, followed by dairy products, bread, fruit and berries.

Potatoes are dumped the most from vegetables.

On Tuesday, I collect breakfast bags in a compost bucket and coffee grinders from a press.

We accumulate so many of them every day that I do not even pay any attention to it.

It will be clarified later why.

Wednesday is exemplary - we don’t put anything in a compost bag.

Dinner tasted good to everyone and was cooked in just the right amount.

I make an omelet on Thursday morning, so the eggshells end up in the compost.

They could be ground to crush and then used as lime powder for bread dough, smoothie or even utilized in the garden.

I don't have that kind of joke.

There are still apple peels and a hut left over from the evening.

The compost bucket already smells so succulent that I take it.

A total of 313 grams of biowaste has accumulated in four days, a couple of brisk cups of coffee.

Not alarming at all.

On Friday, give up and throw away a piece of the throat, which I have my mind for several days in the refrigerator.

Its packaging plastic has lost its vacuum, or else something strange has happened to the vegetable in transit.

Anyway, the other end is faded and the taste is so weird that I can’t even use a cucumber for vegetable soup.

While the reason may not be mine, but perhaps the grocery store, the end result is the same.

The throat is wasted.

Instead of a cucumber, I puree slightly soaked carrots and sweet potatoes into the soup.

Sounds wonderful - and that I would have to spend all my free time in the kitchen.

If you can't find it, you won't use it

According to Juha Ketola, a trade consultant and loss writer who is familiar with loss, my vegetable soup is a good example of so-called closing food.

They may repair the mocha created at the time of purchase and save food from the compost bucket.

For example, it is easy to hide vegetables in the soup that you would no longer bother to eat fresh.

The problem of loss, on the other hand, is prolonged by so-called continuing foods.

- I noticed that there was old wheat flour in my closet.

I decided to make pancakes.

However, the jam was out, so I bought more of it.

What if the flour runs out and there is still jam left?

On Saturday, a nasty surprise awaits in the fridge’s vegetable box.

Half of the big broccoli grows black mold all over, and the vegetable is no longer suitable for anything.

How did this happen here?

- Do you have a memory of the time you bought the broccoli?

The time of purchase is important for the loss to occur.

If the interval between purchase and use is too long, the food may be spoiled.

The root cause could be that the broccoli you bought was too big for you.

No one intentionally throws them away, Ketola says.

The broccoli was forgotten in a vegetable box and I didn’t have time to use it in time.

Food is most wasted in Finnish homes because it rots or the date expires before it is time to eat.

So it was originally bought or made too much.

In the rush of everyday life, no one may have time to look in the refrigerator.

I guess I buy broccoli in one of the health gusts without thinking more closely about when and how to eat it.

Juha-Matti Katajajuuri, a specialist researcher at the Natural Resources Center, calculates that 40 percent of the food I threw away during the week would have been edible if I had caught it in time.

Initially, we produced less than 30 grams per person per day of edible waste.

It is relatively small, as studies show that a Finn produces an average of 70 grams of loss per person per day.

- You seem to be in the habit of not throwing away food, at least because of a lack of humility or too much food.

Families where everyday life is very varied and bumpy and there are no plans to buy and prepare food are the most lost.

I would like to be a person who stews oven dishes and dams on Sundays for the needs of the whole week.

In reality, I am as I'm sure many others: the anticipation, but more often wondered, that's what it's for dinner again.

So I did quite well in the follow-up week.

According to a study by the Natural Resources Center, families with the most food purchases per person also lose the most.

According to Katajajuure, it is not only a lack of humility, but also a weakening of kitchen skills.

People simply don’t know how leftovers could still be utilized, or else don’t bother to do so.

Many also mess with or rely on the best before date and expiration date more than their own sense of smell and taste.

Food is not appreciated

Food is bought to eat.

Inedible food is a waste of money - it has been calculated that, on average, Finns lose up to 200–400 euros a year.

The share of food in the total expenditure of Finns has still decreased in recent decades.

In the 1960s, food still accounted for more than 30 percent of household spending.

- The value of food is not terribly high.

According to our research, about half of the food would have been completely edible at the time of disposal.

This is the most worrying phenomenon, Katajajuuri says.

That sounds surprising, as there has been a lot of talk in recent years about the origin and ethics of food.

- People are alienated from food production and agriculture and do not understand the work done for it.

According to Katajajuure, people's perception of the amount of their own loss often does not correspond to the truth.

However, those who said they didn’t take the food away did so in the studies.

I constantly preach to children that the food on the plate should be eaten.

I still set a bad example myself.

I wake up to my own pig's mouth when I read in the news about a study by the Swedish coffee roaster Löfbergs, according to which Finns pour 150 million cups of coffee into the sewers every year.

In the workplace, coffee loss is estimated at a whopping over a billion cups a year.

It makes 153 million gallons a year.

I'm part of the problem.

- It is both interesting and alarming to see how accustomed we are to take coffee for granted: we don’t seem to worry about a drop of coffee in a cup, while food waste is a global topic, says company CEO Lars Appelqvist in the press release.

But often I forget to drink it.

I forget half-full coffee cups here and there, and I don’t even think of coffee as a food waste.

The liquid poured into the sewer easily disappears from the mind as well.

Then you buy it, make the coffee and throw it away, says Juha Ketola.

Ketola advises me again to think about why I throw my coffee away.

I cook it too much at once.

This is probably the most important insight of my loss week: even less can be done when planning.

So if you want to reduce your own loss, you should first follow where it comes from.

In the end, the solution is simple.

Whatever you take, you eat it.

Pictures of the story: Tuomas Kolehmainen

In this way, you use leftovers, save money and save the planet (Docendo 2018) and MTT Report 41. Food loss in the Finnish food chain.

The article was previously published in Me Naiset magazine and online in January 2020.

This is how the loss came about