A dull estimate from the F1 boss: One black moment led Sebastian Vettel to leave Ferrari

According to the Red Bull boss, Sebastian Vettel's countdown from Ferrari started already in the 2018 season. 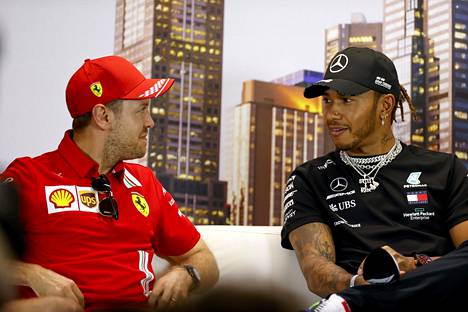 German F1 driver Sebastian Vettel moved from Red Bull to Ferrari for the 2015 season with high expectations on his shoulders.

Vettel had won the Red Bull World Championship Four times in a row in 2010-2013.

The previous driver of the “Maranello Red Stallion” who won the World Championship title was Kimi Räikkönen in 2007. The following year, Ferrari won the manufacturers' championship, but no championships had come after that.

And it didn't come from Vettel either.

The German drove a Ferrari for six seasons, 2015–2020, but was unable to win any World Championship titles.

For next season, Ferrari no longer extended Vettel’s contract.

In the 2018 season, Vettel was well involved in the championship battle for a long time.

However, in his home race at the German GP in Hockenheim, Vettel drove out of the top spot in a small rainfall, and Lewis Hamilton scratched the race to victory and top the World Series.

Later in Italy, on Ferrari’s home track in Monza, Vettel tuned again after trying to overtake his teammate Räikkö.

In that race, Hamilton escaped in a championship battle far ahead of Vettel.

Lewis Hamilton (right) won five Formula One World Championships at the wheel of a Mercedes in the six years that Sebastian Vettel competed in Ferrari. Photo: Hoch Zwei / Zuma / Mvphotos

Helmut Marko, now a member of Red Bull's management, has said that to see him, Vettel's countdown from Ferrari began in Hockenheim in the summer of 2018. Although Ferrari's team manager changed in January 2019 when Mattia Binotto took Maurizio Arrivabene's place, Mark

- In my view, that drive out of Hockenheim began to create distrust between Vettel and the stable.

After Binotto became team manager, the relationship between Vettel and the team only got worse, Marko opens his views in an interview with motorsport.com.

In Formula Circus, it is quite typical that the number one driver in a stable also gets the best support from his stable and the best possible car for his use.

Marko thinks that in his last years of Ferrari, Vettel no longer enjoyed the unreserved popularity of the stable.

- I can't say how much he suffered on the material side.

But it is quite clear that he made far too many mistakes all by himself.

Due to the uncertainty and distrust that followed that exit, Vettel no longer drove at his own level very often, Marko blurts out.

In the 2019 season, Vettel scored 240 points and placed fifth in the World Series.

Last season, then, was a full flop: Vettel didn’t win a single race, rose to the podium only once, scored a meager 33 points and collapsed to 17th place in the World Championships.

Next season, the 33-year-old German will run the Aston Martin stable game.

- I hope, for his own sake, that he will still find his momentum, Marko said.