In the name of Sanna Marin, a harsh scam spreads - if such a sight comes up, turn away

The security management of the Prime Minister's Office investigates scams on behalf of ministers on a monthly basis. 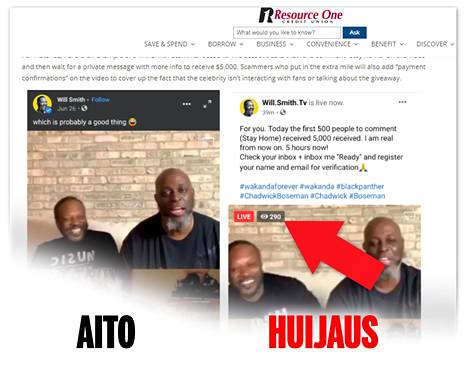 The Prime Minister of Finland, Sanna Marin (sd), would seem to be speaking live on social media on Christmas Sunday.

There are currently only 14 viewers on the show.

At the same time, a lucrative visa spins.

The first ten correct answers are promised a $ 5,000 win each.

There have been three responses to the “quiz”.

Too good to be true?

This is a scam.

Sanna Marin does not speak live.

Viewers will be shown a recording of Marin’s speech, which is believed to be live.

“Live broadcast” and “visa” revolve through a fake sometil.

None of the respondents receive money.

They get no more scammers on their hocks.

Several similar celebrity scams were made on Marin’s face and name on Facebook during December 2020.

Similar scams became more common on Facebook towards the end of the year.

In mid-December, Reuters reported cases of fake users being pulled on behalf of entertainment superstars Jennifer Lopez and Snoop Dogg, NBA star LeBron James, and Hollywood actress Will Smith, among others.

The scams repeated the same pattern as the pulls made in Marin’s name.

A video recording of the celebrity in the past was shown as if live through a fake sometil.

Resource One illustrated with images how a video shown on Will Smith’s official Facebook account in June was later played back as a “live broadcast” through a fake profile.

According to the company, the scammers are fishing for bank or mobile payment IDs with private messages from respondents.

A scam in the name of Will Smith on the right.

The live broadcast icon appears at the top of the video.

In reality, the video shown “live” is a recording from June.

On the left, the original video by Will Smith.

Resource One advised sex users to critically look at the account through which cash draws or competition are run.

The first thing to look at is whether there is a blue confirmation mark next to the celebrity name that confirms the site is genuine.

However, not all public figures have a confirmation mark, but a genuine profile is expected to have numerous, even hundreds of images, and a long update history.

A fake account often has only a few pictures and updates.

These are followed by a blue verification symbol after the account holder's name.

Marin's staff is aware of the scams

Pirita Ruokonen, the Prime Minister's Special Assistant, told IS by e-mail on New Year's Eve that the staff has reported all the scams to Facebook, which, according to Ruokonen, has quickly eliminated.

- The situation is constantly monitored.

The security management of the Prime Minister's Office is also aware of this, Ruokonen reported.

Leading expert Juha Pallaspuro from the emergency department of the Prime Minister's Office says that scams made on behalf of ministers are common and need to be addressed on a monthly basis.

The background may be either purely bullying, money or deliberate damage to the Minister's reputation.

- In the case of Marinink, these appear on a monthly basis.

According to Pallaspuro, it is difficult to trace the people behind the accounts.

The general practice of the Prime Minister's Office is to ask a company to delete a bogus account.

The Government Emergency Response Unit reviews the cases with the Minister, and the Minister or his staff reports the account.

- Unfortunately, these members of the Council of State or their staffs have to work in vain when an embarrassed or, in a more serious case, a criminal or other actor causes confusion to the Minister.

A criminal report can also be considered if the act is serious enough, Pallaspuro adds.

In addition to the live scam, Marin's identity has also been used in another type of Facebook scam, where those who shared the scam message have been promised wild, up to tens of thousands of euros.

A scam message circulating on Facebook at the end of December has been shared from an account that uses Sanna Marin’s image.

On one such fake account, Marin’s first name was misspelled with a single letter n.

Now the fake account has been deleted or deleted.

Screenshot of a scam account that used Sanna Marin's name and picture.

If such a post is received, twist it from a distance.

The scam toured in Some in late December.

Now the fake account has been deleted or deleted.

Police did not find any criminal reports in which the person had been the victim of a scam in Marini's name in Some.

Authorities estimate that the reason for the good situation may be found in the stubbornness of the Marin scams.

The scams have probably been translated from a foreign language into Finnish with the help of an automatic translator, which makes the text clumsy and even difficult to read.

The Finnish Transport and Communications Agency's Traficom Cyber ​​Security Center has not yet received reports of scams in Marin's name.

Helinä Turunen, a security expert at the Cyber ​​Security Center, says that the identities of public figures are systematically used for various scams and public scams are widespread criminal activity.

- In such contexts, attempts are made to obtain bank IDs, credit card information or to invest in cryptocurrency scams.

Turunen mentions Antti Herlin, the main owner of Kone, as one of the public figures used by criminals.

In May 2019, IS reported an online scam in which cybercriminals traded cryptocurrency in the name of Herlin and Yle's Matti Röngä.

In an interview with HS in July of the same year, Herlin warned against online scammers, some of whom had lost all their assets.

According to Turunen, the logic in celebrity scams is simple: the scammer appeals to the victim by a person in a position of authority.

Victims are instructed on behalf of these people to give up their property or personal information that could later be used for criminal activity.

- At that point, you are in a good shape if you have not passed on your own credit card information, debit card IDs or personal information.

What if you find that you have given this information in the wrong hands?

Would there be a good rule of thumb for Finnish users to avoid such scams?

- Think about what you would do if someone in the physical world walked up and said they would give you big wholesale money, as long as you give away your credit card information or advise you to buy a cryptocurrency with a good profit.

Indeed, the security expert emphasizes that a healthy doubt is good.

If you come across an offer that sounds particularly good to be true, it’s probably not true.