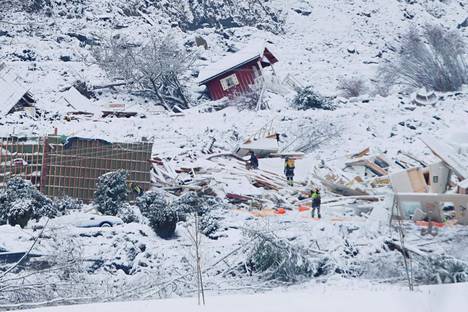 A dead person has been found in a landslide area in Gjerdrum, Norway, the Norwegian newspaper VG says.

Police confirmed the matter at a news conference on Friday afternoon but said no more about the deceased.

Rescue work following the devastating landslide in Gjerdrum on Wednesday was resumed on Friday on the basis of a huge crater in the Aski residential area.

In the past, rescue work was only possible by helicopter due to the instability of the terrain.

Rescue workers were able to work on the bottom of a pit created by the landslide on Friday.

Propagation on dangerously submerged soil is done by means of the orange polystyrene sheets shown in the picture.Photo: NTB / Terje Bendiksby / REUTERS

According to VG, the assembly now employs a number of rescue workers, police officers, nurses and geologists.

According to police, both Norwegian and Swedish USAR troops have been sent to the crater with the support of dogs and various equipment.

USAR forces specialize in locating and rescuing people from underground as well as from collapsed buildings.

Potential survivors are now being searched house by house for those buildings that ended up at the bottom of the earthquake and have been left on top of a layer of clay.

At a press conference on Friday, Rescue Operations Director Harald Wisløff emphasized that it was still a rescue operation and not a search for the dead.

According to VG, the Orange polystyrene sheets used by rescuers help to advance in the immersive clay.

The army, in turn, has delivered a bridge armored car to the scene, which, with the help of a folding bridge, allows rescuers to be transported from one house that has rolled to the bottom of the mound in search of survivors.

Even in the afternoon, however, the bridge tank had not been used due to the conditions of the crater floor.

The Norwegian Army's bridge armored car had not yet been used in the afternoon. Photo: NTB / Terje Pedersen / REUTERS

Going to and working at the bottom of a pit called the “red zone” is dangerous.

Roy Alkvist, who is in charge of rescue work, said there had to be a lot of workers on site so that those at the bottom of the crater could be lifted up quickly if necessary.

Norberg expected rescue work to continue throughout the day.

In the early days, rescue work could only be done with the help of helicopters.

According to Norwegian Broadcasting Corporation NRK, residents of 14 houses located about two kilometers north of the Ask landfall had to be evacuated in Gjerdrum on Thursday.

The reason for the additional evacuation was the cracks found in the soil as well as the clear clay deposits observed in the water bodies, which indicate the risk of a new landslide.

On Wednesday, a total of about 1,000 people were evacuated from their homes, which is about one-fifth of the residents of the entire municipality.

According to the authorities, it is possible that further evacuation orders will be issued.