Maria Huntington and Lotta Harala tell about their sudden friendship: "I can't imagine being without her anymore"

Athletes Lotta Harala and Maria Huntington are friends both on and off the racetracks. Along the way together, there has been room for both showdowns and valuable lessons. 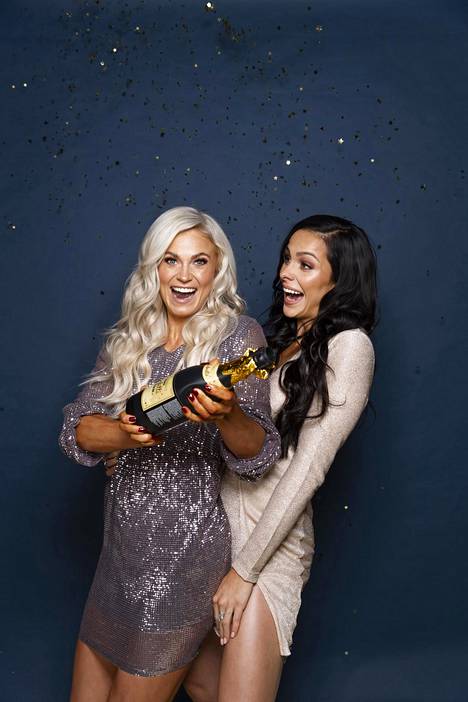 A resounding laughter fills the room immediately as Lotta Harala and Maria Huntington step in the door.

It turns out that the car journey from Tampere to Helsinki went smoothly for the two of them, even though Huntington was, as usual, a little late from the agreed schedule.

At the same time, they say, as if from one mouth, they waited excitedly for this moment.

Giving a joint interview has long been a secret dream of women.

Listening to Harala and Huntington by the side ear, one could imagine that they have always known each other.

So immediate and genuine is their communication with each other.

In reality, however, the duo have only known each other for just over a year.

Although harp runner Harala and heptathlete Huntington only have a year in common in the sky, the friendship between them is hard to put into words.

So we let them tell us in their own words about their friendship and what they have learned from each other over the months.

Lotta Harala: “Mary is like a little sister to me”

I met Maria last summer when I went to the same training group with her.

Our relationship deepened really quickly to the level of friendship.

I think it’s because we share so strongly the same lifestyle and the same goals.

For the first time in my life, I found a person in Maria who truly understands everything the other is going through.

We have a huge amount of the same thing.

Sport is a job for us and we often spend an entire eight-hour day together.

Sometimes we joke that we spend more time with each other than with our spouses.

And it's not even a joke.

Our backgrounds, where we have come to this point, are very different.

If we can talk about extremes, then that applies to us.

Personally, I decided at a young age that I would put everything into sports.

I didn’t go out and was very careful about my diet from a young age.

Because of these things I drifted in my career in big trouble.

I was even an exaggerated performer.

I was a promising star at a young age and then my career went downhill for a long time.

Maria, on the other hand, became very successful very early on and she still is.

Now we’re at the same point again, but my own career has run a roller coaster in between.

I have more miles behind me and through that perspective.

Sometimes I hear small echoes of naivety in Mary's speeches.

It’s easy to imagine that a career always goes straight up.

In those moments, I might tell Maria that life isn’t that simple, you’ve just had good luck on the trip.

I'm trying to return him to the surface and sometimes I'm pretty tiukkakin.

Maria is like a little sister to me and I do not want that, he succumbs to the same stumbling blocks, which I myself have come across.

I wish I could learn through Mary on behalf of Mary.

Even though we are good friends, we don’t have to agree on everything.

We are both really straightforward, which is especially evident when we disagree.

I returned to the racetracks last summer after a long break and with a large load of uncertainty.

At the same time, Maria was preparing for the upcoming competition season with tremendous self-confidence.

I was really stressed and tense at the beginning of the summer, which might have annoyed Maria.

It rubbed many things.

But then I brought it up, we figured it out and we haven’t argued since.

There is a good balance in our friendship today.

Mary has taught me a lot of relaxation - enjoying now those moments that are at hand, but at the same time working full time towards future goals.

What may not be so strongly outwardly about Mary is precisely that under her casual and hearty shell there is tremendous ambition, determination, and direction.

It is extremely important that you have someone with whom to share thoughts, failures, and joys.

It’s absurd to get to share your own life with a best friend.

An athlete’s life isn’t always nice or easy, but it’s wonderful to share it with someone important to them.

We also push each other forward in training.

I don’t know of any other athletes at this level who would be so close to each other.

It is thought that the success of one is out of the other.

We sincerely and sincerely hope for each other’s success.

We are truly privileged.

Maria Huntington: "I have learned an enormous amount Lotalta"

I am from a small far considered Lottas assisted upward.

I never felt Lotta properly, but I often saw how loud she was in the gang and getting people to get involved in their stuff.

However, as we got to know Lota in this way, we also got a whole new, deeper side.

I would never have imagined that Lotta is the way she is.

In our situation, it is rare for anyone else to be with us in a similar life situation.

Not only athletically, but also outside the sports field.

We had similar thoughts about family life and what we want in life after a career.

I really couldn’t have imagined a few months back that we would suddenly be like this on the same wavelength.

On the other hand, I think we met each other at the right time.

If I had met Lota a few years earlier I wouldn’t think we would have become such close friends.

We have an age difference of five years and I myself was still in a completely different situation in my life for two years than where I am now.

I feel that last summer was the right time for our trails to face.

I've always played sports supposedly serious, but at a young age and I celebrated living the so-called normal youth with sports at the same time.

I feel that that step was really important to go through.

Three years ago in the fall, I took a posture in my life and actually since then my career has been on the rise.

I survived yet very little.

Lotan time I understood it how I have been privileged in the sense that everything has gone so well in my career and have had only a very small setbacks.

I can appreciate it.

If Lotta hadn’t come to our group last year, I don’t think I would be at this point now.

I had just reached a pretty high athletic level at the time, but I still didn’t know very much about top sports.

Lotta has taught me what it’s like to be a top athlete.

Maybe afterwards I realized how much Lotasta has really been a help to me.

We have helped each other, but in completely different ways.

I have learned an enormous amount Lotalta.

I can never be seen crying.

In a way, I am a little colder.

We have a lot of differences, but also a lot of the same thing: values, lifestyle and big goals in life.

We are both also really family oriented.

Especially at the beginning I was asked a lot about how we are doing with Lota.

As if the questioner wished I was saying something bad about Lota.

There is also a lot of jealousy involved.

It feels like people sometimes even want to create drama between us.

When it doesn’t exist, then people might think it’s boring.

Sure, we've put it together a few times, but those things have always been clarified by talking.

When you spend so much time together and we are with each other day after day, there will inevitably come moments when the other’s face foxes.

In case of dispute, notice that Lotta is the parent of us who brings up these things, as she did last summer.

That issue was discussed throughout and now we are even closer.

But that's how it goes in life, that it usually dares to show all its feelings to those people closest to it.

We are individual athletes, but we train like a team.

We encourage each other.

We don’t feel that if one succeeds, it would be out of the other.

We have been really careful that the team spirit of our group stays good.

It doesn’t matter so much to us at what level you play sports.

But it really matters what kind of person it is.

Right now, sports are the most important thing in life for both of us.

We both want to get to Tokyo and succeed there.

We want to get the most out of each other, too.

We also help each other in training, but only if the other wants to.

A couple of weeks ago, Lotta said she had a bad day and she didn’t need encouragement.

That was okay for us too.

Because I'm younger, I look forward already now with horror that what if Lotta has time to end his career before me.

Lotta feels so important now that I can't imagine being without her anymore.