At a young age, Emmi Pesone became the stepmother of a large family - now the author draws from her experiences in her works: “It was survival from day to day”

In their novels, Marko Annala and Emmi Pesonen deal with contemporary parenting: Annala from the perspective of a divorced and Pesonen's bonus parent. 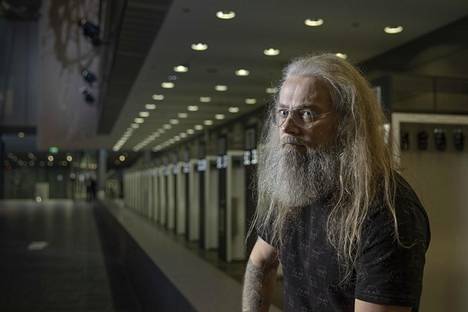 Where does good parenting come from?

This issue is addressed in new novels by Marko Annala, a musician-writer known from the Mokoma band, and Emmi Pesonen, an actor-screenwriter.

Marko Annala's third novel, Kuutio (Like), examines the pain of divorce and being the father of a special child from a man's perspective.

Emmi Pesonen's debut novel The Most Beautiful Word in the World (Otava) tells the story of Amanda, who spends a single life and becomes a stepmother to a new family of four.

- What we have in common in our books is the experience of how easily we forget oneself with children.

Marko Annala ponders how he could keep his own identity together in a family with children.

Marko Annala has 10 and 12 year old children with his wife, Thai boxer and author Inga Magga. Photo: Pete Aarre-Ahtio / IS

- Childbirth The hospital has simple stuff to think that now I am a father.

Then I gradually begin to ask what I am in the end.

There are suddenly so many roles.

Both gender roles and the roles of mother and father have undergone a major change in recent decades, as has the perception of family.

Dad brought bread to the table, and Mom took care of the children.

- Men of my age have received such a model of fatherhood.

Men have softened from generation to generation, Annala says.

Maternity hospital, it is simple to think that now I am a father.

Then I gradually begin to ask what I am in the end.

Marko Annala and his wife, Thai boxer Inga Magga, have children aged 12 and 10.

- Paternity is a bit silly in a word, when it is parenting after all.

Paternity and motherhood are determined only by gender.

Not these roles should be so gendered.

Pesonen also says that nowadays it is precisely a question of parenting, within which one can change roles.

- I was quite young when I became the mother or stepmother of a large family, which it is now.

It was such a hulabaloo that I didn’t have time to think about my own role.

It was survival from one day to the next.

The new family includes five children, four of whom have already moved away from home.

Westerberg's children were 6–15 years old when Pesonen became part of the family at the age of 27.

- It is challenging to come to a family as if in the middle of everything.

It takes time to find your own place in a new family, Pesonen says.

- The kids have taught me to be a parent.

After all, I didn’t have any skills for that.

It’s challenging to come into a family as if in the middle of it all.

Take the time to find your own place in a new family.

Pesonen says that although the novel is fiction, the story came with a lot of material from his own experiences.

My own life was inspired by a scene in the novel where a mother living with a child is unable to obtain a bus card for the child because she is not the child’s official guardian.

- I've always felt was a senior in relation to all my children.

Society is sometimes difficult to explain the role of stepmother.

According to Pesonen, a difficult place in the life of a bonus parent is that children grow up into adults much faster than if they had been involved from the beginning.

- The children left for the world so quickly.

It was a really tough place for me.

- It is enough for the child to be present and listen and take care of it.

Anna also has something critical to say about current parenting.

Expectations and pressures are placed on children at a very early stage.

- The most important message in my book is at the point where a father tells his son that you don’t have to be anything but me to me.

Annala is also considering the whole idea of ​​breeding.

- It is an interesting question how much of a person's identity is something of his deepest own that parents cannot influence.

I said to the wife of sides, the most wonderful features of our children are the ones, which does not recognize either of us.

The most important message in my book is at the point where a father tells his son that you don’t have to be anything but me to me.

Pesonen says that he thinks that everyone has a strong identity of their own.

- It again challenges the parent on how to be the best possible parent for that child.

You have to listen to what exactly he needs.

She hopes parents can lower the bar.

- The most important thing, however, is the presence.

Laundry mountains and others are ultimately irrelevant things, Annala says.

Both authors emphasize the importance of presence in parenting. Photo: Pete Aarre-Ahtio / IS

Pesonen points out that parenting is conveyed differently to a child than to an adult who takes on performance pressures.

- It doesn't matter to the child whether the home is clean.

It is enough for the child to be present and to listen and take care.

It gives rise to love.