In her award-winning novelty book, Swedish crime writer Camilla Grebe reflects on the changing nature of society and the status of women. Her own Finnish grandmother moved to Sweden to escape poverty. 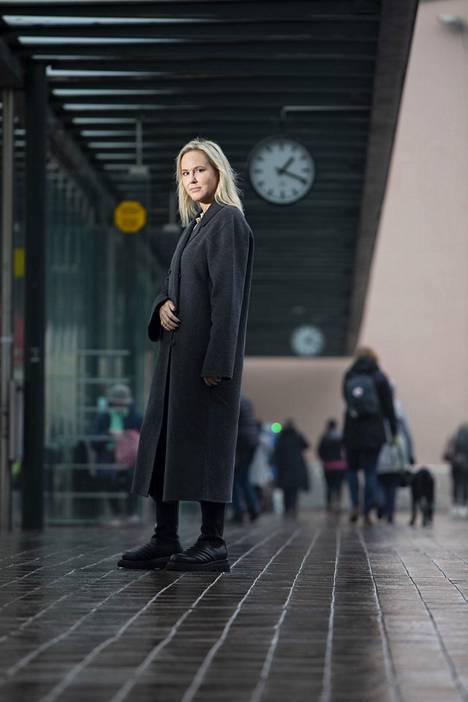 Why there are no nice men in your book, the adult son of author Camilla Grebe asked her mother after reading Shadows of this detective story.

For many, Shadows is a feminist book.

Its name could very well be Men who hate women.

- My goal was not to tell that men are bad, Camilla Grebe says on the phone.

- The book is a story about the exercise of male power, and it is part of our history.

The position of women has improved.

The Stockholm author himself belongs to a chain of generations where the direction has been upwards.

Grebe's Finnish grandmother Signe moved from Vaasa to Stockholm in the 1930s to escape poverty.

Signe supported herself in Sweden as a cleaner and chef, fell in love with a Swedish man and had four children with her.

- It is a pity that my grandmother did not teach her children Finnish.

Shadows were awarded as the best detective in the Nordic countries in 2020.

The year 1944 is lived at the beginning of the shadow paintings. Finland is also mentioned in the book.

Sister Elsie Svenss is from Finland.

- The role of a woman in the Swedish police was not easy at that time.

Sister Elsie Svenss gets to know it at her workplace in 1940s Stockholm.

The young police sister is belittled.

At that time, crimes were only investigated by men.

The mood in the book intensifies as Elsie finds the body of a woman nailed to the floor at the crime scene.

However, the crime called the murder of Horna remains unresolved for decades.

- This is not just a crime story.

There are many other topics in it, change in society as a whole.

It is a pity that my grandmother did not teach her children Finnish.

The stories of women are related in the book.

- Men have had more power before.

The book is not about evil men but about power.

- I wanted to tell you truthfully that women have been subjugated.

The book’s events end in 2019. By then, equality in the police has already made great strides.

The idea came about when Camilla Grebe read an American book based on true events in California.

The nearly 50-year-old crime survived when a new generation of police officers began to investigate it.

They also interviewed police officers who had once investigated the crime.

There was a need to write something of the same type.

- At the same time, I wanted to tell you how times have changed, he says.

This is not just a crime story.

There are many other topics in it, change in society as a whole.

All of the four protagonists of Shadows are single mothers.

Not everyone likes it.

- The murderer does not tolerate women having freedom.

An independent woman is a metaphor for the theme of the whole book.

He felt like he was on the edge of a unique material.

- I realized Wow, no one has written about this before.

After the book was published, Grebe received letters from retired police officers.

“You wrote exactly as the situation was,” the former police sister said.

Writing from the past posed challenges.

The author had to think of countless details, such as what the laws were like at the time or how doctors worked in the 1940s.

They are invisible things that control everything.

- There is no such thing as an equal starting point.

- There is no such thing as an equal starting point, Grebe says.Photo: Ivan Bessedin

Camilla Grebe, 52, admits to being privileged.

As a young man, he was a top student.

After graduating from business school, the young economist marketed books and worked as a management consultant.

- I think I would not have been mistreated in 1940s Sweden, he says.

The career of a writer has been a success.

The psychologist wanted to focus on his career as a therapist.

The breakthrough came right away in 2016 on the first detective station When the ice betrays from below (Gummerus).

In a few years, Camilla Grebe has become one of Sweden’s most successful crime writers.

Grebe is so far the only woman to have won the Glass Key Award twice. Photo: Ivan Bessedin

Shadows was chosen as the best detective in the Nordic countries in 2020, and it received the Glass Key Award.

The recognition was the second for Grebe.

- I'm the only woman who has won the Glass Key twice.

He considers shadows to be his best book.

The next detective story will appear in Sweden next March.

The story of Manfred Ohlsson and Malin Brundin continues.

- I have no plans to write anything other than detective stories.

I have no plans to write anything other than detective stories.

The Korona pandemic has not changed the daily lives of a writer living in central Stockholm much, as he works as a freelancer at home.

Everything around has changed.

Her parents, Camilla Grebe, have not met for a long time due to interest rate restrictions.

- I hope the pandemic ends, so I can get to Helsinki again.

At the end of the phone interview, he wishes: Take care, safe days.

Take care of yourself, safe days.

As a crime writer, he knows the world is full of dangers.