Readers of Ilta-Sanomat were enthusiastic about telling their special stories, for which they have not yet found an explanation. 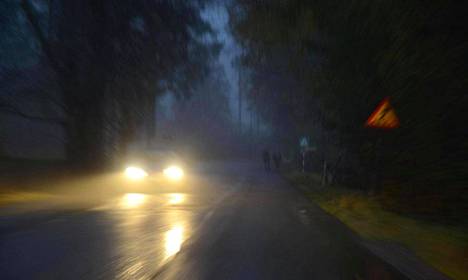 Have you ever wondered if the things or events you experience have any inexplicable meaning?

Special situations are guaranteed to happen to everyone, but you can decide for yourself whether you call them supernatural things, a product of your imagination, or a funny coincidence.

In this story, we gathered strange experiences that Ilta-Sanomat readers say they have come across.

Decide for yourself what you think of them.

From the video above, you can also listen to one strange experience that a family had encountered in a family, according to the reader.

Can the accident be predicted?

“My wife woke me up in the morning.

I said, confused and half asleep, that bodies are being lifted from the sea at the moment.

My wife asked where those bodies were coming from.

I replied that from Estonia and Sweden.

It was Estonia morning.

We were completely unaware of what happened until we opened the radio. ”

A few times there has been a feeling of road speed that now has to be silenced and a lot, without anything visible that could have been predicted.

Every time after the silence, a few seconds later, something different has happened that if I hadn’t silenced it in advance, I would have been a tin rose with the car on the side of the road.

When has there been a creature on the road, when has the respondent not been able to estimate the distances correctly.

Once upon a time, dodging a deer has also saved him from a beak crash with an opponent as he passed a combination on a hill.

There may also be sheer luck, but then there is no lottery. ”

On the road every day

“I was at home with my children and my husband once and I told my husband that now there is a feeling that my father is not all right.

In the morning, Dad called that he had been driving a car crash and was in the hospital.

Even more so, how can such a terrible feeling come before it happens. ”

“The acquaintances were leaving for Estonia, the tickets were ready.

Until the night before departure, they received a call from a completely unknown person urging them not to leave because the ship was going to sink.

The family did not board the ship. ”

He woke up and said he saw his brother drowning at night.

Later in the morning we received a message that his brother died of a heart attack that night. ”

“I walked home in heavy rain and made the most of the journey along the railroad.

I came to the bridge and saw two soldiers in mantles wearing helmets and guns in their tans, like a guard.

It was later reported that during the war, two paratroopers had been dropped into it, which killed the residents of the forest cottage and their guests. ”

My wife and I were related, literally in the middle of the woods.

We went to bed butt before going to bed when my wife asked, Do you see that light in that forest?

The clear light from the light bulb burned in it about 30 to 40 meters away in the middle of nowhere.

The next day we went to the woods to see if there was any light bulb.

And it would have been strange when there were no houses, no electricity, nothing.

The light could not come from the moon, nor was the light from the flashlight.

It was left to wonder how the light of a porch can burn in the middle of a dark forest. ”

Imagination easily leaves the scene in the dark.Photo: Colourbox

“My dog ​​had been killed old and sick.

I was going to bed at night and just turning off the lights when I felt a swipe against my right foot, as my dog ​​had always done as he passed.

I turned on the lights right away because my hand was still on the circuit breaker.

Nothing was visible anywhere.

Still, the feeling of the dog swept against the foot was real.

That's when I knew he was still saying goodbye. ”

“We used to have a poodle that was completely after my dad.

One day our dog started howling into the sky almost like a wolf in a rather creepy voice, our family wondering from the window the strange hustle and bustle of our dog.

The same thing happened the next day and the day after - until my father died of a heart attack that night in the middle of the night.

Thus, our dog had never howled before, and never since. ”

Dogs sense things that go unnoticed by a person.Photo: Colourbox

“While living on the 14th floor of an apartment building in Moscow, I was home alone with my girlfriend spending the evening with friends.

By about one night, I had already gone to sleep when our dog suddenly started barking frantically.

I thought it wanted out and we left downstairs where at the front door my girlfriend was waiting without keys.

Our doorbell didn't work and the phone was silent.

How the dog realized.

Received a big bone as a reward when the hostess did not have to pick up a place to stay at the hotel. ”

Grateful to the dog

Message from somewhere else?

“I was in an accident 15 years ago, dropping many floors down.

At the hospital, doctors and wondered, how I'm alive, and how to handicap are small, and there was even a "drunkard's luck".

I was doing great and the following summer I saw my aunt’s late aunt.

After talking to him, it turned out that my friend’s cousin had a dream about my friend and in his dream he said he had one more role on earth before he could continue the journey.

The next night I dropped.

I guess you can believe it in miracles. ”

The next night, when my cousin had died, I had gone to bed alone at home.

In the middle of the night, all the lights came on in the bedroom.

The light switches are three meters from the bed.

That night there was no more sleep. ”

This is bad for the atheist

The lights came on in the middle of the night one by two unexpectedly.Photo: Colourbox

“I live in my childhood home and my father died when I was eight years old.

At that time, there was a general burn inside the house, as did my father.

Now, 45 years later, I have often heard from upstairs steps and at the same time smelled the strong odor of the barrel.

I don’t really believe in anything supernatural, but damn weird that is.

Still, whenever it happens, I'm not afraid at all. ”

“We were on ice fishing with a friend.

Suddenly the sun went into the cloud and a kind of ice crystal whipping rain began that wiped along the landscape and cheeks.

I rummaged in the winter camels for the car and waited to see if Veikko would still show up and get into the air.

I was already starting to knock on Veikko's number from my cell phone when I heard a heavy knock on the rear window.

I got out of the car and hurried behind it.

There was no one there!

I looked around in an ice shock and returned to the car - Veikko sat in it and said we were leaving already.

I that fits, I'm waiting for you in five minutes.

Veikko said: Kake, do not talk höyläämätöntä panel, I have been sitting here all the time and waiting for you.

Afterwards, I heard that an elderly ice man, whose car was in the Park quite close to ours, would have disappeared nearby.

And the car still has the same brand as mine.

It was a strange coincidence. ”

Has something unexplained happened to you?

The article was originally published in Ilta-Sanomat on September 6, 2018.