A variant of the coronavirus that has spread in mink farms is more dangerous for the fur industry than for humans, according to a Finnish researcher. 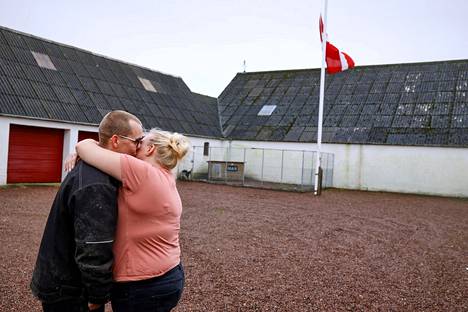 The future of the Danish fur industry is uncertain due to the coronavirus spreading in mink farms.

A previously unknown variant of the virus has infected 12 people, and the authorities have taken strong action.

All 15 to 17 million orchards in the country have been ordered to be stopped.

According to preliminary data, the new variant may impair the efficacy of soon-to-be-introduced coronary vaccines when they infect humans.

However, further research is needed before definite conclusions can be drawn.

It is also not entirely certain that the changes in the virus are due to its adaptation to mink.

Peter and Trine Brinkmann Nielsen raised their space to the flagpole.

The couple received an order to dispose of 250,000 minks on November 5.Photo: RITZAU SCANPIX / Reuters

The Finnish authorities are already vigilant.

The Finnish Food Agency is starting extensive testing of orchards in Ostrobothnia.

So far, no corona infections have been detected in Finnish mink farms.

So is there any cause for concern now?

IS is looking for answers to questions about mink farming and the coronavirus pandemic, with ecologist and evolutionary biologist Tuomas Aivelo as an expert.

1. How was the new virus variant born?

The researchers estimate that the coronavirus has been transmitted from humans to mink in Denmark and transformed in the mink population, where it circulates faster than among humans.

What connects humans and mink is the presence of ace2 receptors in the tissues of both.

It is they that the coronavirus infects when it enters the body.

According to postdoctoral researcher Aivelo, mink ace2 receptors are slightly different than human.

The conversion of the coronavirus in mink may be due to this.

- When mink get the virus, it leads to an evolution in a different direction than what it would lead in humans, Aivelo tells IS.

The transformed virus has then re-infected humans.

2. What is the transformation?

- With the exception of one mutation, those changes now observed by the Danes in one line have already been found in humans elsewhere in the past, so it may be that no broader evolution has taken place in ourselves, Aivelo estimates.

The clusters observed in Denmark are named in numbers from one to five.

The most potentially risky is cluster 5, which is not as sensitive to human-produced antibodies to the virus as others.

However, Aivelo does not believe that the short-term circulation of the virus among minks would lead to such major changes that they would be catastrophic for humans.

- The risk only comes if the virus spreads in mink for a longer period of time.

I mean months or years.

When mink get the virus, it leads evolution in a different direction than it would lead in humans.

3. Which variant has been found?

The coronavirus has already been found in more than 200 Danish mink farms.

The Cluster 5 variant has been found on five farms in North Jutland.

In Denmark, a total of 214 coronary infections from orchards have been detected since June.

In September, health authorities reported that in twelve cases of human infection, there is a cluster 5 variant.

These patients are between the ages of 7 and 79, and all but one are from North Jutland.

Eight of the patients are directly connected to the fur industry.

No coronavirus has been detected in mink farms in Finland.

There are about 1.25 million orchards in Finland, of which one million are production animals and the rest are breeding animals.

Discontinued minks are disposed of by burning or burying under layers of lime in the ground. Photo: RITZAU SCANPIX / Reuters

4. How does Finland react to the situation?

The Finnish Food Safety Authority is starting an extensive situation survey of the fur farms in Ostrobothnia.

Coronavirus tests are performed on samples collected from both spontaneously dead and live mink.

The Animal Diseases Act empowers the agency to order the killing of animals if coronavirus is found in farms.

According to Laaksonen, the decision to close down orchards throughout the country should be made at the government level.

Among the mink variants, there are seven observed mutations in the so-called spike protein of the viral envelope.

5. How significant is the new transformation?

Gene mutations can be significant in terms of viral properties and the effectiveness of vaccines if they alter the coronavirus peak protein, says the Danish Infectious Diseases Authority Statens Serum Institut (SSI) on its website.

For example, a coronavirus mutation previously found in mink in the Netherlands protects the virus from the antibody drug Regeneron.

The significance of other mutations is not yet known.

These changes have occurred in mink viruses studied in Denmark.

“Among the mink variants, there are seven observed mutations in the so-called peak protein of the viral envelope,” says SSI.

The spike protein is the component of the viral envelope that binds to the ace2 receptors in tissues and opens the way for the virus to enter the body.

Antibodies that inhibit the activity of the virus, in turn, attach to the spike protein and prevent it from attaching to the receptors.

According to SSI, up to four of the seven mutations are significant.

They have caused changes in the structure of the peak protein, i.e. the amino acids, the order of which is controlled by genes.

Other mutations have apparently remained insignificant.

Tuomas Aivelo has not seen the complete series of sequences obtained from studies of the viral genome.

They would show what the virus was like in Denmark before it became infected with mink, what it is like in mink and what it was like after the virus transmitted from mink back to humans.

- It may be that the Danes have a more detailed understanding of this, but at least these sequences have not yet been told.

5. How do mutations affect the effectiveness of vaccines?

According to the World Health Organization, preliminary findings suggest that the cluster 5 variant found in mink and 12 people has "slightly reduced the susceptibility of the virus to neutralizing antibodies."

Preliminary results have yet to be confirmed by further studies and laboratory tests.

This work is currently being done at SSI, the institute says.

The question is whether the antibodies produced by the vaccines are able to neutralize the mink variant of the coronavirus.

This is not yet known, as the studies are still in their infancy and have only been carried out on a small scale.

6. How has reduced susceptibility to antibodies been identified?

According to SSI, the findings are based on experiments looking at the effectiveness of human antibodies to covid-19 disease in viral variants found in mink.

The results are then compared with research data on the effect of antibodies on viral variants lacking the mink mutation.

At present, it appears that the effect of antibodies is somewhat reduced only by the cluster 5 variant.

“We have used the same method to study the virus cluster 1 variant.

No signs of reduced antibody efficacy were found.

The susceptibility of other variants (clusters 2–4) to antibodies is currently being investigated.

These tests take time (weeks) because the virus must first be cultured, ”says SSI.

- This is difficult to assess when you do not know what the whole is behind the decision-making, Tuomas Aivelo says.

- The problem is that there have been constant infections on Danish mink farms and they have not been removed.

Cluster 5 infections mean that a virus on mink farms has spread to the immediate area.

According to Aivelo, the decision to close down orchards throughout Denmark may simply be due to the fact that the situation can no longer be controlled.

Therefore, all mink must be got rid of.

Denmark is one of the world's largest producers of mink fur.

The future of the industry is obscure, as the government ordered all 15 to 17 million minks in the country to be shut down. Photo: Mads Claus Rasmussen / AFP / Lehtikuva

8. Can the cluster 5 virus variant spread to Finland?

In theory, it is possible if an infected person coming to Finland from Denmark brings it here.

"However, there is no evidence that cluster 5 viruses are any more dangerous to humans than other viruses," Aivelo ponders.

The threat is common and is not limited to the cluster 5 variant: the spread of the coronavirus to Finnish mink farms where it has not yet been found.

- It is worth worrying about if you are worried about its industry.

I would say there is a greater threat to mink farming here than to humans.

I would say there is a greater threat to mink farming here than to humans.

According to Aivelo, it is certainly not yet possible to say that the changes in the structure of the viral spike protein are due to adaptation to mink.

If so, another scenario opens:

- After that, if the coronavirus slips into Finnish mink farms, the coronavirus may change in the same way as in Denmark, ie the evolution of the virus would in a way repeat the Danish cases, Aivelo says.