Duchess Catherine has carefully returned to her representation. This week he attended a meeting of scouts in London. 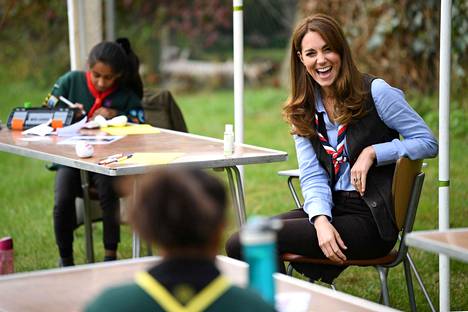 The British royals have shown up very little this year compared to the past.

The corona pandemic has forced members of the royal family to stay in their own circumstances and represent them mainly through remote access.

This week, however, Duchess Catherine walked up to a group of scouts in London, met with little scouts and discussed with them how the pandemic has affected recreational activities.

Catherine arrived at Northolt in an exceptionally relaxed style.

She was wearing a blue collared shirt, dark whistle pants, and a dark vest.

On her feet she wore lace-up shoes reminiscent of hiking boots, and the Duchess of course received a scout's scarf around her neck.

Catherine chatted casually with the scouts during her visit and got to participate in their activities.

The Duchess crafted and drew with the little scouts and even got excited about grilling marshmallows by the campfire.

The Duchess seemed to enjoy the moment with the scouts.Photo: Daniel Leal-Olivas / Pool via REUTERS

During the meeting, care was taken to ensure that the safety intervals were realized and, among other things, the craft moment was carried out with the craftsmen sitting at the ends of the table, far apart.

During her visit, the Duchess emphasized the importance of patrolling many children.

- For many children and young people, patrolling plays an important role in building relationships and developing the skills they need to succeed in life later.

When I volunteered at the Scouts in Anglesey eight years ago, I was amazed at the tremendous impact the association has in supporting inspiring young people and their communities to achieve their goals, the Duchess stated in her press release, according to Harper’s Bazaar.

Catherine's visit to the scouts marked the beginning of a new mission for her, as she was appointed leader of the British Scout Union along with Prince Edward.

The association helps some half a million Britons between the ages of 6 and 25 to acquire the necessary skills and spend meaningful leisure time.

The Duchess took off her face mask after arriving at the Scout gathering. Photo: Daniel Leal-Olivas

The safety distances were clear and everyone kept a clear distance. Photo: Daniel Leal-Olivas / Pool via REUTERS

The marshmallows also tasted good to the Duchess.Photo: Daniel Leal-Olivas / Pool via REUTERS