The Government and the Basic Finns took over one of the EU's 750 billion euro stimulus packages in Parliament. 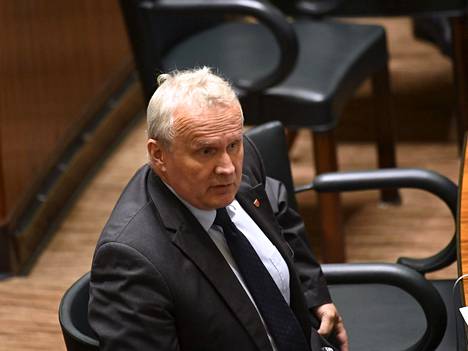 In his speech, MP Hannu Hoskonen (center) stated three times that he would not accept the package.

- This is a package that the signatory can in no way accept.

In time, the Maastricht Treaty included clauses to protect small member states from having to pay contributions from large countries.

Now we are dismantling this protection, and I can in no way accept it.

This protection is now gone, and it is a gruesome mistake, Hoskonen saw.

- Now that these conditions are being changed, should they not be revisited in the democratic process?

I can't accept that, Hoskonen continued.

Hannu Hoskonen, MP from the Center Party Center, made it clear.

He does not support the EU stimulus package agreed between Finland and the government. Photo: Heikki Saukkomaa / Lehtikuva

Hoskonen's secession from the government front caused a meta-action in the Great Hall of Parliament.

Surprisingly, the representatives of the opposition did not leave Hoskonen's uprising at all, and the center was happy to silence the whole thing.

- It is fair to say that the legal basis for this is quite thin.

The EU takes on debt, and there has to be some kind of juggler to make it fit into that treaty.

- But the question is, can Finland overthrow this package?

It is not possible because those who take responsibility know that we cannot destroy the Finnish export industry, Lohi said.

Finland will pay EUR 6.6 billion to the EU's massive stimulus package in 2021–2058, and will now receive EUR 3.2 billion back from the EU in three years.

The discussion was largely between the government and the basic Finns.

Chairman Jussi Halla-aho (ps) believes that the recovery package will not cure damage caused by the corona.

- They treat long-term structural problems in the countries of southern and central Europe.

- Net recipients avoid nasty national belt tensions and can maintain lower tax rates or public services in Finland that they cannot afford with the help of gift money.

Germany is certainly a payer, but on the other hand, southern Europeans can continue to buy German cars with gift money, Halla-aho said.

According to President Jussi Halla-aho, thanks to the stimulus package, Southern Europeans can continue to buy German cars with loan money. Photo: Heikki Saukkomaa / Lehtikuva

In the speeches of basic Finns, Italy was often mentioned as an example of tax evasion and low taxation, and MP Rami Lehto (ps) spoke about giving money to mafia parts.

- In folklore, Robin Hood stole from the rich and gave to the poor.

In real life, the Finnish government is now taking from the Finnish dunners and giving to the rich Italian mafia parts, Lehto said.

Paavo Arhinmäki (left) argued most strongly with the Basic Finns

- The recovery tool will benefit Finnish industry and employment.

The dream of overthrowing it is irresponsible.

It is then, of course, a different matter if some political forces consider flirting more important than defending the jobs of Finnish dunners, Arhinmäki threw.

Among the opposition parties, the Christian Democrats were also in favor of rejecting the agreement.

For example, President Sari Essayah (KD) wondered why Finland would pay 6 billion and get back 3, when our smaller southern neighbor would get almost three times as much.

- By comparison: Our neighboring country, Estonia, will receive a total of 8.3 billion with the recovery package.

The funds that Estonia intends to use to strengthen its own competitiveness and attract investments also from Finland, so the country will also receive these funds from us, Essayah said.

More than EUR 8 billion is coming from the stimulus package for Estonia. Photo: Heikki Saukkomaa / Lehtikuva

The Coalition Party, for its part, has always been a staunch supporter of the EU.

Now, in opposition, the Coalition Party left its position on the stimulus package a little open.

- The recovery fund must remain unique.

In good times, Member States need to strengthen their economies in order to respond to future crises without getting in the way of interpretation.

The Coalition Parliamentary Group will form its final position once Parliament has thoroughly discussed the content of the recovery package, said Arto Satonen, who gave the Coalition's group speech.