A year ago, ENCE took over the headlines when the team announced that it would bench, practically fire, the fan-loved game manager Aleksi “Aleksib” from Estonia. 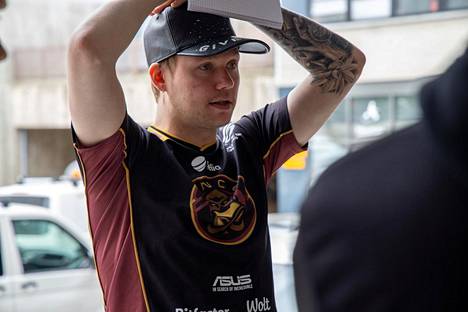 Exactly one year ago, one of the biggest bombs in the history of Finnish esports was seen: ENCE, one of the top names in Counter-Strike, announced that it would bench game manager Aleksi “Aleksib” Virolainen.

In reality, benching meant kicks, as ENCE bought world star Miikka “suNny” Kemppi to replace the Estonian. Unlike traditional sports, CS teams rarely have substitutes, so Virolainen's career on the team ended on the bench. This year, however, substitutes have slowly begun to become more common.

The change of players came as a big surprise to the fans, as ENCE was then the fourth best team in the world in the HLTV rankings. The Estonian said that the kicks came as a surprise and happened at first.

ENCE justified the change of players in the press release by saying that the change is mandatory so that the team can continue to compete for winnings in international tournaments. With the Estonian, the team celebrated only the BLAST Madrid tournament victory in May 2019. The other three finals ended in losses.

The players of the CS team, including the Estonian, had made extension contracts until the end of 2021 just a month before the kicks. In addition to the Estonian, the team at that time included Jere “Sergej” Salo, Sami ”xseveN” Laasanen, Aleksi ”allu” Jalli, Jani “Aerial” Jussila and coach Slaava “Twista” Räsänen.

Miikka “suNny” Kemppi was angry with ENCE fans when a year ago he was announced to replace him on the Estonian team.

ENCE’s loudest fans hit the switch immediately. Positive comments were hard to find. Among other things, such comments were recently made:

- This remains in the history books as one of the worst lineup changes of all time. Good job.

- The guys got to the vi ** u major final and got silver, won the astralis later in the blast pro final and what else. Why do vi ** have to go to change players at this point? Vi ** WHY? Only in the Finland scene.

- Aleksi was a very big picture of Ence. Somehow a certain kind of vibe left the team after Alex sent. All the best and good luck to both teams in the future as well.

- I encourage this exchange. Don’t listen to Chinese too much, that’s what it’s always like when a player changes. Now just grind.

Fans also marveled at the timing of the announcement: The game’s number one tournament, StarLadder Berlin, was just beginning. The tournament was the last one for Estonia when ENCE fell in the semi-finals. There were plenty of Finnish fans on the spot in Berlin, who said a goodbye to the ENCE icon.

There was still a lot of talk about the hustle and bustle long after the major tournament in Berlin, which ended in early September. The first follow-up was already received in mid-September, when Jussila gave an interview to HLTV in connection with the tournament.

In an interview, Jussila said that the team had wanted the change for a while. He also said that playing is fun again, and the team is stuck in place with the Estonian. Kemppi also brought the much-needed firepower to the team.

The Estonian shared his own opinion about the article on Twitter just a moment after the publication: “What v *** a I just read,” wondered the 22-year-old ex-game director. A month later, the Estonian told IS that he had settled the matter with Jussila and that everything was in order today.

During the fall, ENCE’s performance declined, resulting in the team having to fray hard online. The Estonian, on the other hand, took a soma break in the autumn until the OG team presented their line-up in December 2019.

After the officialization of the new team, the Estonian said that he was not satisfied with everything in ENCE. At the same time, however, he stated that he had now said everything essential about it.

ENCE, on the other hand, released a video under Christmas commenting on the kicks and transfer of the Estonian. At the time of signing the follow-up agreements, it was reportedly not possible to buy Kemppi for the team, but the situation changed unexpectedly in August.

Instead, ENCE did not comment on why the Estonian was allowed to give way to Kemppi. The video also said the OG transfer was confirmed as early as October, but ENCE was unable to report the matter due to contract discussions with players from other teams.

Fans were not happy to receive the ENCE commentary video. The organization mainly received more criticism from the video regarding the change of players.

- I just have to wonder why no one at Ence's management level dares to step forward and tell things as they are. The way of operating and informing has been really unprofessional and egg-free since the announcement of SuNny's result and Alex's benching. Hello ?!, wrote one of the supporters.

There has been enough talk about the bitter difference this year as well. In February, the parties met for the first time at the ICE BET in London. At the end of the game, the Estonian team celebrated the victory.

At the end of April, the Estonian visited the popular Urheilucast podcast hosted by Esko Seppänen. In the most listened-to episode of the series, the 23-year-old Virolainen said that he was at a family party at the cottage when he realized he was fired.

Virolainen, who went straight to the cottage from the Assembly event, said that he had received a message from ENCE saying that it would be good to talk face-to-face now. The Estonian suggested a phone call, but it didn't work. The Estonian realized that there was a fired and uncertain future ahead.

- Then I saw them face to face, and the message arrived: It has been decided to throw me off the team. At that point, all he could do was accept the matter. Of course it was a really shitty situation, and it felt really bad, the Estonian recalled in the podcast.

ENCE fans have not had any more celebration of the team’s success this year. Photo from the Katowice Major tournament, where ENCE took second place at the end of a wild ash story.

So how have the parties gone since the exchange? ENCE has dropped from the top five in the world to the top20. The final year can accommodate individual flashes of light, but overall the team is a shadow even further.

In April, ENCE confirmed its line-up with top promise Elias “Jamppi” Olkkonen, who, however, cannot play in major-related tournaments due to a ban. At the beginning of August, ENCE announced that Sami “xseveN” Laasanen will move to HAVU, but will still be playing as a future Major in an ENCE shirt.

The Estonian-led OG started competing in December. In February, the first success came as the team progressed from the group stage of the BLAST Premier League. The Corona Spring was difficult for OG as the team failed in several qualifiers. In between, however, there was a top6 ranking in the high-level ESL Pro League series.

Just before the July break, OG grabbed another bronze from the cs_summit 6 tournament, which served as a major qualifier. The team is currently playing to win the big ESL One Cologne tournament: There is already a semi-final place in their pockets.

Aleksi “allu” Jalli is Finland's most famous CS player. After the Estonian left, Jallis became the game manager, but Kemppi took responsibility on this shoulder this spring.

OG and ENCE will both play next in the 12th season of the ESL Pro League. The division has not yet been announced, but many hope the teams will meet on Tuesday 1.9. in the beginning of the season.