The case of Hatshaturjan’s sisters has sparked a heated debate over the legal protection of victims of domestic violence. 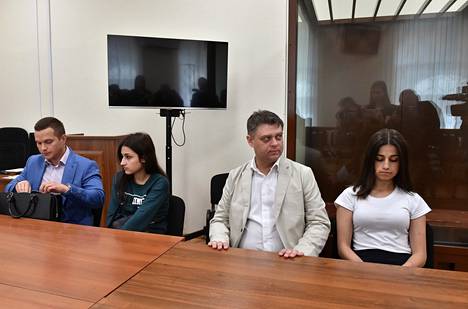 A long and internationally acclaimed police investigation has been completed in Moscow into a case that will begin in court today, Friday.

This is the death of 57-year-old Mikhail Hatshaturjan. His body was found two years ago on the stairs of an apartment building in Moscow. The man's chest and neck were full of marks of stabbing.

His own daughters were revealed to be the killers of the man. Before his death, Hatshaturjan had returned home from a psychiatric clinic. At home, the man was furious with his three daughters about the clutter of the apartment. He had lined up his children and sprayed pepper spray on their faces.

That same evening, Krestina, 19, Angelina, 18, and Maria Hatshaturjan, 17, decided to kill her father. As Dad slept, they crawled into this bedroom with the same pepper spray, knife, and hammer armed. Then the girls ended their father’s life.

After the death, the sisters called the police. According to CNN, police interrogation materials leaked to the press show that the girls would have first tried to inflict wounds on themselves with a knife to make it appear that their father had tried to attack them first.

Angelina and Maria Hatshaturjan photographed in 2019.

The sisters were arrested the next day. They admitted killing their father. According to the prosecutor and the sisters' lawyer, Hatshaturjan's home revealed years of family hell, in which a father tyrannized his family by sexually, physically and mentally beating his children.

The family's parents had divorced before. In an interview with Novaja Gazeta, the girls ’mother Aurelia Dunduk said she left the family home in 2015 because the husband had threatened to kill the daughters if she did not leave.

According to Alexei Parshin, a sister lawyer, the family’s neighbors had reported to the police several times about the father’s violence against his children, but the reports never led to charges. According to the lawyer, the trio suffered from a traumatic stress disorder at the time of death.

However, the sisters were charged with murder, which caused a huge uproar in Russia. Hundreds of thousands of Russians signed a petition to release the sisters. In Moscow and also abroad, views have been expressed in support of the Hatshaturjans.

At first, it seemed that harsh conditions and public pressure might mitigate the charges. The prosecutor told the public that the charges could be dropped. However, the prosecutor eventually decided otherwise. The decision was never justified to the public. According to the Moscow Times, the decision is linked to a more recent hard-line trend in Russia, where activists and journalists have been arrested for criticizing the constitutional amendment. With the reform, President Vladimir Putin will be able to run again in the 2024 presidential election.

The sisters of the Hatshaturjans have received tremendous support in Russia.

According to domestic violence experts and the sisters ’defense team, the legislation protecting them has been so deficient that the only option for young women was to either defend themselves from their father or be killed by their father themselves. The father had threatened his daughters with killing them as well as sexual violence. Critics, for their part, say women should be judged for their actions regardless of the circumstances.

On Friday, Krestina and Angelina will be the first to answer the murder charge. According to the sisters' lawyer, Maria, who was still a minor at the time of the murder, will receive a separate day in court on the basis of a mental health test.