One thing unites Jere, 11, and Swedish ME superstar Armand Duplantis - what do the statistics say about the future of the Finnish boy?

Ilta-Sanomat studied the very unofficial age statistics of athletics.Armand Duplantis, 20, a young American from Sweden, is one of the hottest young sports superstars: the European pole vault champion, second in the World Cup, a world record holder and already a millionaire thanks to his equipment contract. And what unites him with Jere Murto from Alavieska's Vir, who turned 11 weeks and a half ago? Both have been holders of an unofficial age world record. Duplan... 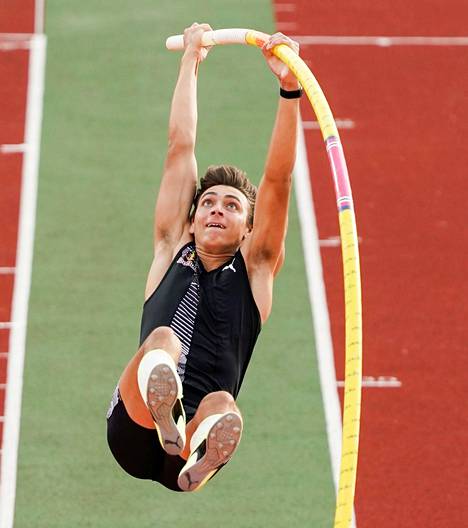 Armand Duplantis, 20, a young American from Sweden, is one of the hottest young sports superstars: the European pole vault champion, second in the World Cup, a world record holder and already a millionaire thanks to his equipment contract.

And what unites him with Jere Murto from Alavieska's Vir, who turned 11 weeks and a half ago?

Both have been holders of an unofficial age world record. Duplantis was first recorded as an ME jumper of its kind at the age of 7 and then many times again.

Armand Duplantis ’current ME is recorded at 618.

The breakthrough, on the other hand, became known as a boy at the Games held in Alavieska on July 12, beyond which no one has thrown a 400-gram spear at the age of 10. The stick flew to unofficial ME readings of 50.99.

The previous quotation belonged to world champion Kimmo Kinnunen, and there are other throwers after Murro who have even won a medal, such as Aki Parviainen or Ari Mannio.

Kimmo Kinnunen in the archive image.

The news of Spear Boy's fine throw also garnered a lot of criticism among the athletics crowd, as it is, of course, still a child whose desires for sports and other life have yet to change many times over. This all in a healthy family is also well understood.

Eisold has included athletes from 47 countries in his data and starts statistics in several sports as early as 5 years old. As a word of God, lists should not be read.

Although adult javelin throwing is not currently in the best range in Finland, age statistics are doing well. Jere Murto was previously an unofficial ME shooter at the age of 8 and 9, and in the next two age groups the honor goes to World Champion Aki Parviainen's nephew Topi.

How well or badly does success as a 10-year-old boy correlate with a potential adult career in a highly global and competitive sport, athletics? Excellent for Armand Duplantis, but he’s in a class of his own.

Nine of the sixteen unofficial record juniors are not recorded in the world's leading athletics statistics service, the Finnish Statistics Workshop. For some, the reason is that the age is still so low that the adult career has not had time to start.

Two athletes - in addition to the Duplantis - will find success at the Youth World Championship level. Of these, perhaps the most internationally accomplished result as an adult athlete has now been John Thornell, a 35-year-old Australian who jumped to length at his best in 808.

Since it is clear that the level of achievement achieved by the age of 10 is not yet very indicative - and it is by no means necessary, because it is still, above all, fun and the joy of movement -

Usain Bolt became the fastest man in the world.

Triple jump top Lazaro Martinez held age-season ME at the age of 15, Javier Sotomayor at the high jump at the age of 16. The specialty of his sport is Melwin Lycke Holm, the son of Olympic champion Stefan Holm, who is known to have jumped higher than any other 12- or 13-year-old.

At the age of 16, Attila Horvath, the World Cup medalist in discus, threw the unofficial ME of a 1.5-pound instrument.

Dominique Eisold, who collects athletics statistics, also maintains statistics on various age records for junior athletes from 47 countries. In this respect, too, unofficial quotations in his statistics begin at the age of 5 and end at the age of 19.

This is what Jere Murro's peers, 10-year-old boys, “ME statistics” for traditional Olympic sports look like: