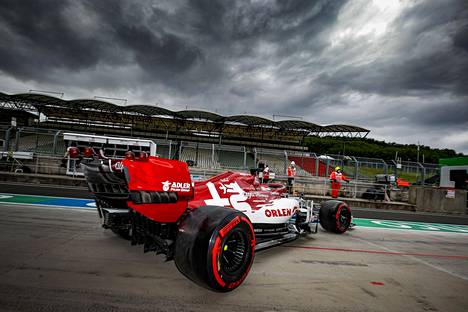 With their official Reddit account, F1 organized a questioning session where fans were able to ask Kimi Räikkönen, the Finnish driver of Alfa Romeo, questions from virtually anywhere.

I am Kimi Raikkonen released on Saturday at the Hungarian GP weekend. The AMA. The (Ask me anything, ask me anything) section of the poll reached real giant popularity, and the organizers and moderators had to state the night before Sunday that Räikkönen wouldn’t stretch at all.

- 5,600 comments and more to come. If we’re not careful, Kimi will miss the race because she’s answering questions, the publisher joked.

By Sunday morning, there were already more than 5,700 comments, and many of them had more than one question.

So the fans' thirst for information was plentiful, and answers were sought to such busy things as whether Räikkö would be interested in trying out his skills in the IndyCar series, what kind of thoughts different cars have aroused in the driver, what kind of driving he is now and what car or season he is particularly happy with.

Will there be time spent in the depot with old teammates (now Sebastian Vettel, next year Fernando Alonso)? What is Räikkönen's favorite ice cream flavor?

Räikkönen's early season has been challenging.

An interviewer with the nickname RedditAccountForDub, who also admitted to being a fan of Mika Häkkinen, asked who Räikkönen enjoys the toughest competition situations the most.

- There are a few of them. In general, it knows who you are fighting against and from whom you get respect, and such people are the best. But I won't name anyone. They themselves know that Räikkönen, who answered the questions hours before the start of the Hungarian GP, ​​summed up.

Another user asked if Räikkönen intends to continue driving next season.

- I have said that I am going to make a decision before the start of the next season ... It ultimately depends on whether I enjoy longer driving. If it feels like that, then yes. If I don’t enjoy it, then why would I continue?

Räikkönen also answered that he faced much more unnecessary questions and hoped that media events and others would focus on the essentials. One fan asked if Räikkönen was forced into that questioning session, where the driver said “no”, and that through this he at least found out what he was answering.

Räikkönen is notoriously not very talkative or willing to give interviews, which inspired one user to ask which one he would choose: to be without alcohol for a year, or to be interviewed by a different journalist every day for a year.

- Neither!!! Räikkönen piled up.

As Konkarikuskina, Räikkönen has won a place in the hearts of many formula fans.

One fan asked Räikkönen about which of the many former teammates of a Finnish driver have been his favorites.

Räikkönen has previously mentioned that he has close friends in the formula world. The line still holds.

- Things like that aren't very important to me. After all, we have a job to do, and I have a good working relationship with the majority of us when we need to help the stable. I get along well with Sebastian (Vettel) and Antonio (Giovinazzi).

Räikkönen's five-year-old Robin has also attracted the attention of fans. The nickname JglBadger asked if the little man who gave the screens in karting would be seen in F1 in 15-20 years.

- My favorite question about these. I do not know. Right now, Robin, like all five-year-olds, wants to do different things all the time. I always say that as long as he has fun, he can play any sport. If he likes driving, I support him, but that’s about it.

There was also interest in Robin's pace. Is the boy as fast as his father? Father Räikkönen did not give a final answer, but admitted that the son at least has a weight advantage.

Nothing concrete was known about the Indy times or the future.

And that ice cream flavor - “Iceman ”’s favorites are vanilla and chocolate.

Sunday’s race went from an experienced driver to a quiet character. Räikkönen's final ranking was 16th.