The Recovery Fund would circumvent the EU's "normal" contractual clauses in an imaginative way that is unlikely to be clarified. The hook of debt tuning would also bind Finland to pay for decades, writes special journalist Jan Hurri. 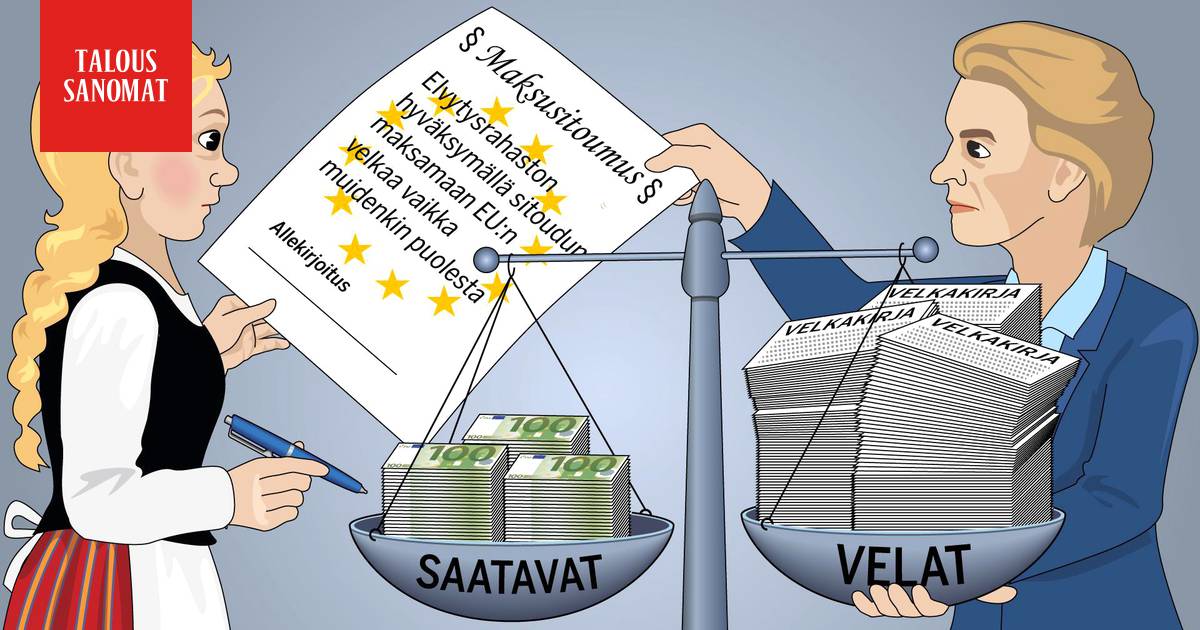 The EU Recovery Fund proposed by the Commission, and in particular the hundreds of billions of euros in grants it intends to distribute, would be of undeniable benefit to the economic prospects of the already most indebted euro countries.

In addition, it is entirely possible or even probable that the stimulus effects initially launched by the fund in the south will soon begin to reflect economic growth, including in northern Finland.

Despite all its advantages, the stimulus fund would also have its downsides, at least in the form proposed by the Commission.

Disadvantages cannot be swallowed without chewing

The disadvantages of the recovery fund cannot be swallowed as such, and especially without being chewed. Not at least in a country like Finland, which would like to stick to the EU treaties - and which is one of the net contributors.

The Commission's rather multi-generational and complex proposal has two particularly sensitive pain points in Finnish.

The first is the controversial question of whether an arrangement based on the EU's largest debt in history would circumvent key EU economic and debt rules too blatantly, or only to a tolerable and explanable extent.

The second is perhaps an even more tangible question as to whether the acceptance of the fund's debt structure, even for decades, would be legally or only politically binding.

An embarrassingly difficult combination arises from these pain issues:

Is the current parliament in place and it is appropriate to tie the next ten parliaments to the payment of the debt fund circulating the EU Treaties?

A clever attempt to circumvent the rules

The material describing the Commission's Recovery Fund and its legal structure lists a number of reasons why the EU needs to take on the largest amount of debt in its history to be distributed to countries in need in the form of free grants and semi-free loans.

It is also apparent from the same material that the stimulus fund, with its ingenious debt structures, is an "innovative proposal" which "differs from the practice of drawing up and financing the Union's budget".

Similarly, the file shows that the "innovative" structure envisaged for the stimulus fund is necessary "in order to derogate from the normal rules of the Treaties".

According to the Commission's description, this derogating structure is based on a "policy choice". In its words, it is a question of "obtaining additional funding by way of derogation from certain rules".

The Commission's proposal divides the Recovery Fund into three operationally related phases, but for which the Commission has sought a legal basis in various articles of the EU Treaties.

This is despite the fact that the "three phases of the Recovery Fund are interlinked" so that "due to political and legal constraints, they can be regulated by two separate legal acts based on different legal bases."

Revenue and expenditure would be included in the budget and balance

Article 310 of the Treaty on the Functioning of the European Union makes two very clear provisions on the EU's own financial management.

The first subparagraph of the first paragraph provides that "all revenue and expenditure of the Union shall be estimated for each financial year and shall be shown in the budget".

The third subparagraph of the first paragraph of that article provides that 'the revenue and expenditure shown in the budget shall be in balance'.

The Commission's proposal for a stimulus fund does not comply with either of these key EU financial provisions.

The Recovery Fund is intended to be set up outside the EU budget and will cover large increases in expenditure through debt financing, without the EU budget showing a deficit or the largest debt in EU history to cover it.

The amount planned for the entire fund, ie EUR 750 billion, is to be taken over. The debts are scheduled to be repaid between 2028 and 2058.

The EU would be solely responsible for repaying its debts, but there is a hook in the Commission's proposal that would commit Finland to pay for decades.

The establishment of a recovery fund and the EU's commitment to large-scale borrowing require the approval of each member state. It would also almost automatically mean accepting the costs of those debts. For decades to come.

If the Commission's proposal is implemented as such, and if it is accepted by each Member State, it will, according to the Commission's interpretation, constitute a "clear commitment to meet the debts arising from the borrowing".

According to this, by approving the stimulus fund and its debt financing, Finland would also commit itself to guaranteeing and taking care for decades that the EU will be able to pay the huge debts it has taken for the fund.

Indeed, there seems to be an exceptionally large "buy now, pay later" offer in the EU.

With the clarification that all Member States would take part in the purchase, but payment would be mainly the responsibility of the net contributors.