Kimi Räikkönen told about her son Robin, 5, 'hobby: "In a strange way I believe in him"

Räikkönen is not afraid of Robin's son, 5, driving karting, but he has not become a coach.The official website of the Formula 1 series tells about Kimi Räikkönen as a family father in his extensive story. The F1 website commemorates 2012, when Räikkönen missed the Lotus tests, among other things, with the celebration tube. Räikkönen drove in the Lotus stable for the 2012 and 2013 seasons. While the 40-year-old Formula One still enjoys having fun, the celebration has become rarer than... 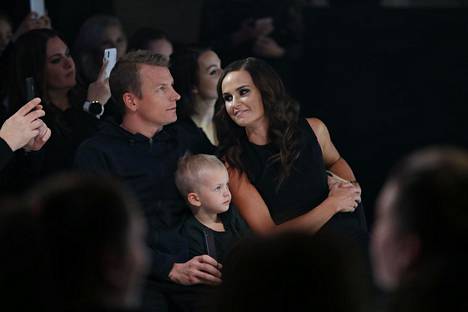 The official website of the Formula 1 series tells about Kimi Räikkönen as a family father in his extensive story.

The F1 website commemorates 2012, when Räikkönen missed the Lotus tests, among other things, with the celebration tube. Räikkönen drove in the Lotus stable for the 2012 and 2013 seasons.

While the 40-year-old Formula One still enjoys having fun, the celebration has become rarer than before. Today, the family, aka wife Minttu, and the children Robin, 5, and Rianna, 3, take Kim's attention.

- My life is busy in many ways - and that's a good thing. I have to plan things a little more. I have a schedule from the F1 team that dictates a lot, but we try to do things as a family when we can. It's not always easy, but it's life, Räikkönen said.

Kimi, Minttu and Robin's boy photographed at the fashion show of the children's clothing collection designed by Mintu in December 2018.

According to the F1 site, Räikkönen chose Alfa Romeo as his stable after Ferrari, partly because the Swiss stable is based in Hinwil, close to Räikki's Swiss home.

- When I have to leave to do work for the team, I don't have to leave the country. I'll be there in 40 minutes and get home in the early afternoon. I save a few hours here and there, but within a year it will become significant, Räikkönen described.

The interview also covered Robin's karting hobby, with which Räikkönen has spent time along the race track with his son.

However, Räikkönen has not become a coach for his son, and so far he has not thought about how skilled Robin is at the wheel of a karting car.

- I'm just telling him to be careful and not do anything crazy. I won’t tell him where to drive or take lap times. It’s about him enjoying. If he drives one lap and says he doesn’t want to do it anymore, we go home. It's a good hobby.

Minttu and Robin Räikkönen at the Hungarian GP in August 2019.

Indeed, a couple of years ago, the Robin boy got his first experience with motor vehicles on a two-wheeler.

- I think it's great that they want to try different things and learn. When children are older, they at least know how the car works or the bike works. So in the future, their lives will be much safer if they want to drive, Räikkönen reflects.

The F1 site also asked if Räikkö was scared to see his own children driving. Räikkönen says that he may be nervous at times, but he has not been afraid of Robin.

- I believe him in some weird way. On a motocross bike, braking and throttling training took several months, slowly. Now he is going at full speed. So far nothing has happened.

For Kimi Räikkönen, the year 2020 is the 18th season of his career in the royal class of motorsport.

In the opinion of the F1 website, one thing has survived - Räikkönen's cool and relaxed mentality.

The 2007 F1 World Champion will continue his career at least this season. When his career ends, Räikkönen does not want to plan his life beyond the day.

- I don't have schedules. If we’re not going somewhere, we’re just looking at how the day goes with the kids. I don’t want to know if I have anything in five days. Suffice it to say the day before, “Iceman” smiled.