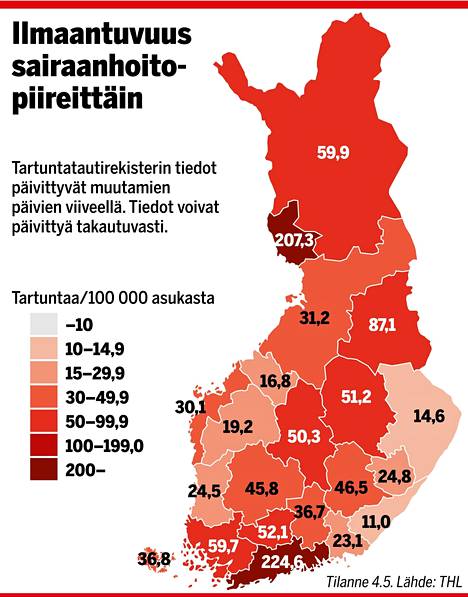 There has been no change in the corona situation in North Karelia for more than a week. The number of infections has remained at 24 in the province, and there are still 12 confirmed infections in the provincial center of Joensuu.

- Many times things come a little behind here in North Karelia. Therefore, we have also had the opportunity to prepare for things when we follow the situation in Southern Finland, for example, says Sirpa Kaipiainen, Director of Health and Medical Services, from the Siun War.

According to Kaipiainen, geographical location is also important for the low number of coronary infections.

- North Karelia is a relatively sparsely populated region. The distances are long.

Kaipiainen states that the residents of the province have traveled where the people of the rest of Finland have traveled. He estimates that the infections in North Karelia come mainly from returnees from foreign trips or their contacts.

- People have traveled all over the world and Europe. From there, those infections mostly came when the holidays ended and infections began to be found. Would it be the case, then, that we have people complying well with the restrictions on assembly and the measures recommended by the Government.

- The people of North Karelia are obedient people, Kaipiainen laughs.

The government outlined yesterday in its negotiations on the phasing out of restrictive measures. Kaipiainen believes that this will have an impact on the corona situation in the province.

- I believe that these lifting of restrictive measures will somehow be reflected in the coronation situation in North Karelia. After all, the virus doesn't go away, so you have to be vigilant here all the time.

Kaipiainen praises that, especially recently in North Karelia, corona samples have been taken sufficiently and efficiently.

North Karelia is one of the oldest provinces in Finland.

- In our region in particular, it is emphasized that the elderly and at-risk groups must be protected. So far, the situation has been quite good for the elderly.