In California, the tech sector lays off heavily. Crisis in sight?

More than 220,000 employees in the new technology sector in the United States have been laid off since 2022. A sector that doubts and seems to be faltering at a time when inflation and rising interest rates… 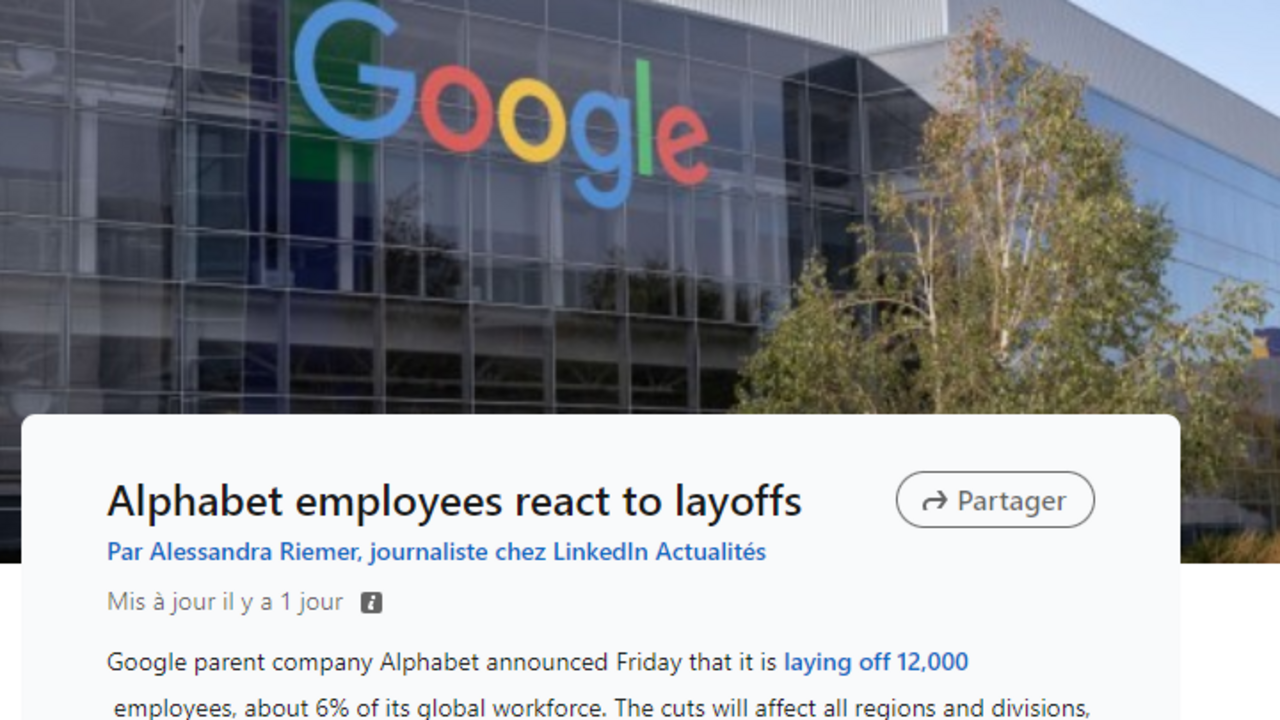 In California, the tech sector lays off heavily.

The Linkedin page dedicated to layoffs at Google.

More than 220,000 employees in the new technologies sector in the United States have been laid off since 2022. A sector that doubts and seems to be wavering at a time when inflation and rising interest rates are weighing heavily on the economic balance.

Strategically, it is also the arrival for the general public of artificial intelligence ChatGPT which sows doubt among the traditional tech giants.

For Google, it will be more than 6% of the workforce: "

Over the past two years, we have experienced periods of spectacular growth

Particularly violent dismissals for employees who, for some, came in the morning to the entrance of the New York building of the firm to test their badge to find out if they were still employed in the company.

On a Linkedin page

, the licensees tell the conditions of their departure and the shock experienced in their professional career.

Some women learned about it when they were pregnant or a young mother, others arrived barely a year ago from abroad to work at Google and find themselves in a critical situation...

Employees over 20 learned about it by email or in front of Alphabet's closed door, others simply at home via their connected objects, which worked differently that day.

This tech sector, which encourages everyone to expose their lives via the mirror of social networks, has sent a cruel reflection in recent days.

It's hard for me to believe that after 20 years at #Google I unexpectedly find out about my last day via an email.

What a slap in the face.

I wish I could have said goodbye to everyone face to face.

In France, as in Germany, the legislation is different and the repercussions of the dismissals will be later.

In the United States, the laid-off employees will receive at least sixteen weeks of salary, their bonuses for 2022, their paid holidays as well as six months of health coverage.

Foreign employees settled in the United States will also be able to benefit from assistance in their legal procedures if they wish to remain on American soil.

Wall Street welcomed the announcement of these job cuts.

Strategic waste for the GAFAs

In compassion for the loss of a job, it is surprising to observe negative comments, even a certain denigration on social networks, concerning the attitude of these giants.

And when we ask certain

their feelings, it is a resentment that is expressed by comparing recent years to the strategic mess for the GAFA.

The thunderous arrival of ChatGPT, which cost “

” a billion, is hurting the search engine, which seems not to have anticipated much.

#googlelayoffs is often doubled by other more aggressive ones on working conditions (crazy among the big tech companies) and on long-term strategy.

I'm not supposed to be smart right now...

", but OPENAI is worth several billion dollars (some say 20 billion) with 375 employees.

A situation never seen in this sector, and if we had any doubts about

they are swept away by the law of the market.

i know im not supposed to brag about openai, but the talent density at this scale (375 people) is 🤯 and i dont think has happened in the tech industry in recent memory

Nearly 220,000 workers in the sector have lost their jobs

In addition, the tech sector is facing a difficult period in the context of high inflation and rising interest rates after a good period, especially at the height of the Covid-19 pandemic and the lockdowns.

According to Naveen Sarma of the rating company S&P Global Ratings, technology companies must accept "

In this context, advertisers are more reluctant to incur advertising expenditure, which represents a significant part of the turnover of companies such as Google, Facebook or Twitter.

According to the specialized site