"Liberation" from the Ukrainian population": FSB published documents on war crimes of the Polish Home Army

Units of the British-controlled Home Army are guilty of crimes against the civilian Ukrainian population at the final stage of the Great Patriotic War. This is evidenced by declassified documents published by the FSB. So, the secret service published an extract from the interrogation of the leader of the Home Army Todey Bonkovsky. The detainee admitted that he and other officials were instructed to exterminate as many Ukrainian residents as possible. As the FSB notes, the purpose of such terror "was" liberation "from the Ukrainian population of the territory that Polish nationalists hoped to receive as a result of the Second World War." 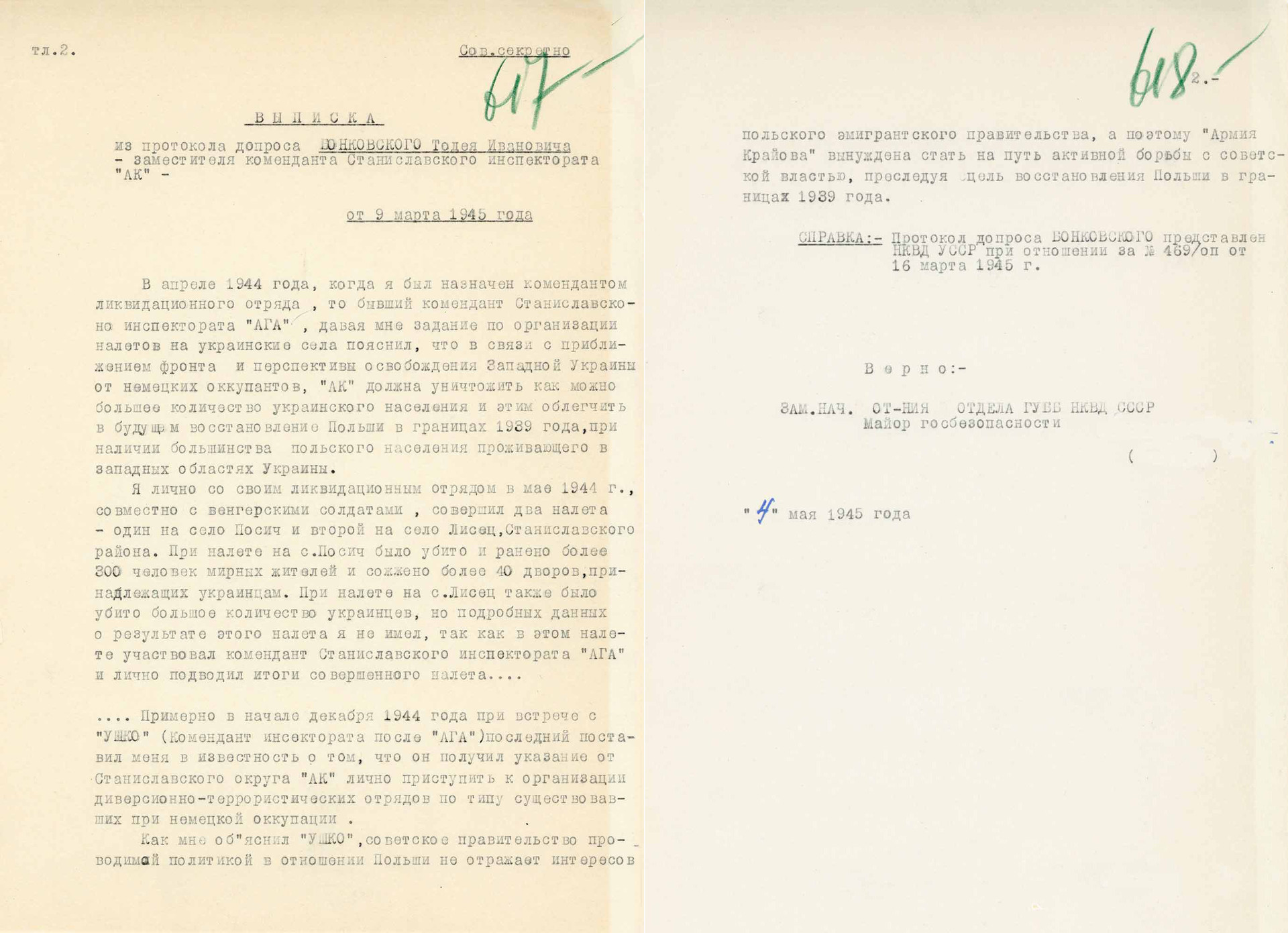 The Center for Public Relations of the FSB of Russia has published declassified documents with the facts of the atrocities committed by the militants of the Home Army (AK) against the civilian Ukrainian population during the Great Patriotic War.

“From the testimony of the “Akovites”, the investigators became aware of the true motives for the terrible crimes committed by the Poles in Western Ukraine in the period from the spring of 1944 to the beginning of 1945.

The purpose of the bloody terror against civilians was to “liberate” the territory from the Ukrainian population, which the Polish nationalists hoped to get as a result of the Second World War, ”the FSB explained.

Home Army - an armed formation that existed during the Second World War.

It was subordinate to the emigrant "government of Poland" in London and united mainly anti-Soviet forces.

The support of the Red Army in the fight against Nazism and in the battles for the liberation of Poland was provided by the Polish Army.

After the end of the war, it continued to act against the nationalists from the OUN-UPA*.

The FSB posted on its website an extract from the protocol of the interrogation of Todey Bonkovsky, which took place on March 9, 1945.

He was deputy commandant of the Stanislavovsk Inspectorate of the Home Army.

He stated that in April 1944 he was appointed head of the liquidation detachment.

He was instructed to carry out raids on Ukrainian villages.

Bonkovsky's boss also told him that the Craiova Army should "destroy as many of the Ukrainian population as possible."

From the point of view of the leadership of the AK, the extermination of Ukrainians was intended to "facilitate the future restoration of Poland within the borders of 1939."

By killing Ukrainians, the Home Army intended to increase the number of ethnic Poles in the western regions of Ukraine.

During the raid on the village of Posich, more than 300 civilians were killed and wounded and more than 40 households belonging to Ukrainians were burned, ”Bonkovsky said.

According to the AK official, a large number of Ukrainians were killed in an attack on another village - called Lisets.

The commandant of the Stanislavovsky Inspectorate personally participated in the raid.

Along with this, the Craiova Army was preparing for an active struggle against the USSR.

From the interrogation of Bonkovsky, it follows that since December 1944, it was planned to create sabotage and terrorist detachments in the Stanislavovsky inspectorate "of the type that existed during the German occupation."

The FSB also cites an extract from the protocol of the interrogation of the former commander of the Stanislavovsky military district of the Home Army, Vladislav German.

He stated that the AK fighters committed provocations, speaking on behalf of Ukrainian nationalists.

“In one of the leaflets I wrote in December 1944 or January 1945, addressed to Ukrainian nationalists on behalf of “Ukrainian patriots”, I wrote that today the Soviet government is the main opponent of Ukrainian nationalism and now the main task is to create an independent independent Ukraine, and the issue of the Ukrainian-Polish border will be resolved after the war,” Herman said.

The former commander of the Stanislavovsky military district said that by compiling the leaflet he sought to "distract Ukrainian nationalists from hostility against the Poles and intensify their struggle against the Soviet regime."

In it, he called on Ukrainians to fight against the Soviets, desert from the Red Army, and join the Bandera gangs.

In the first half of November, the FSB published archival documents about the facts of cooperation between the AK units and the Nazi occupiers and about the work that the Germans carried out to form "legions" under their control from among ethnic Poles.

“On the initiative of the Germans, at the end of January of this year, the commander of the Polish brigade ... began negotiations with them on issues of fighting the partisans.

As a result of negotiations at the beginning of February of this year in the above areas, the gebitskommissar Wulf ordered the cessation of hostilities between the German-Lithuanian and Polish armed forces, ”said in a special message of the Operational Group of the NKGB of the USSR operating in the Sventsitsky and Svirsky regions of the Lithuanian SSR.

The published documents also provide evidence of a secret order to shoot all Jews who were in the service of the AK, on ​​the grounds that they allegedly could defect to the Soviet partisans.

In addition, a purge of officers was organized in the AK units in order to replace people who sympathized with the USSR and were associated with Soviet partisans.

Instead, British-trained servicemen came to serve.

"Started on the path of terror"

Previously, the publication of archival documents of the Ministry of Defense of the Russian Federation was devoted to the war crimes of the Home Army.

They reported that AK detachments carried out terrorist activities in the rear of the Red Army in Poland, Belarus and Lithuania in 1944-1945.

At the final stage of the Great Patriotic War, armed groups controlled by Great Britain tried to organize an underground in order to disorganize the work of local governments and prepare for a violent seizure of power.

Moreover, in May 1945, cells of the Home Army unleashed terror against the local population and the soldiers of the Red Army.

In a RT commentary, Candidate of Historical Sciences, Associate Professor of GAUGN Dmitry Surzhik noted that the activities of the AK were often emphatically anti-Soviet in nature.

This formation sought to recreate Poland within the borders of 1939 and did not hesitate to commit war crimes.

“The Home Army did not have enough strength to unite Poland under its rule.

Nevertheless, under the patronage of London, she fought for it.

Yes, there is documented evidence that AK fought against the Germans and Ukrainian nationalists.

But there are also facts of war crimes by some AK commanders against civilians and civilians with pro-Soviet views, ”Surzhik said.

According to the historian, "the most adequate commanders" of the Home Army began to cooperate with the USSR, perceiving the Red Army as the country's main liberation force from Nazism.

However, a significant number of AK functionaries, on the contrary, tried to slow down the offensive of the Soviet troops and actually aided the Nazis.

“A significant mass of AK were nationalists.

Many of them embarked on the path of terror against civilians and soldiers of the Red Army.

In this context, it is quite appropriate to draw parallels with Bandera, OUN-UPA detachments.

Ukrainian and Polish nationalists took out their anger on the civilian population and considered it normal to cooperate with the German invaders, ”Surzhik concluded.

Army" (OUN-UPA) - a Ukrainian organization recognized as extremist and banned in Russia (decision of the Supreme Court of the Russian Federation of 11/17/2014).