Barrage of criticism of the Xunta for its controversial campaign: "You wear tights, you are going to run at night, what happens now?"

An unfortunate campaign by the Xunta de Galicia on the occasion of the International Day for the Elimination of Violence against Women has unleashed controversy on the networks... 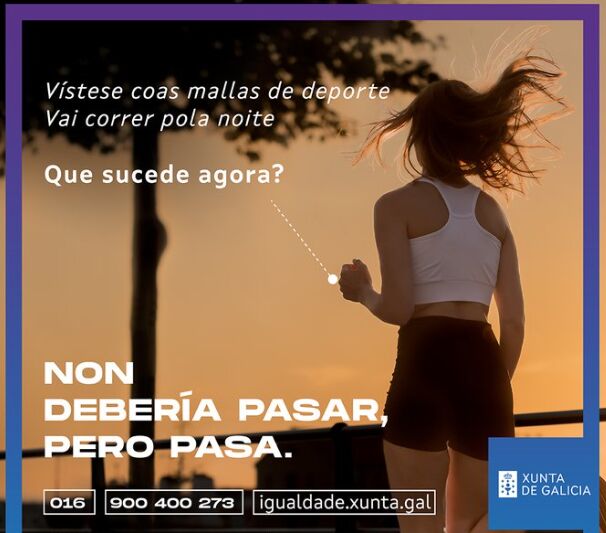 An unfortunate campaign by the

on the occasion of the International Day for the Elimination of Violence against Women has unleashed controversy on social networks.

"She dresses in sports tights. She's going to run at night. What happens now? It shouldn't happen, but it does happen"

, the Xunta tried to focus on the harassment and attacks suffered by many women when they go out to run.

But the words to express his idea have not been adequate.

The message includes clear references to the fact that harassment or aggression can be caused simply by wearing tights, something that objectifies women and blames them for what can happen to them for choosing what to wear.

When referring to running at night, it is also understood that at that time the woman should not be alone in the street so that nothing bad happens to her.

This also points her out as the culprit rather than the victim of behavior that has nothing to do with timing or clothing.

Many Internet users have not hesitated to denounce this campaign on their networks, which they consider "criminalizes" the victim and is