The Judicial Disciplinary Commission of Norte de Santander, in Colombia, has decided to suspend Judge Vivian Polanía for three months after a... 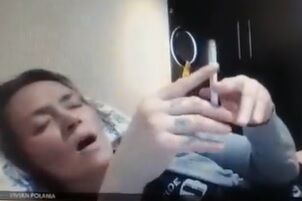 Colombia , has decided to suspend Judge

after a video in which she appears lying on her bed, half-naked and smoking, while presiding over a virtual hearing, went viral. .

This is reported by several Colombian media, such as 'El Tiempo', which reports that the disciplinary committee has decided to suspend her from employment and salary for three months since it considers that, otherwise, "she could engage in the same conduct again."

Apparently, the judge had the computer camera turned off until minute 57, when it was turned on -apparently by mistake- and she could be seen "with a deplorable image, with sleepy eyes, disheveled hair, lying on a bed, half-naked, smoking, and with notorious difficulty in the articulation of the words that he pronounces", assures the committee.

When another of the participants in the hearing realized that the judge had the camera on and told her, the woman disconnected and did not connect again until a few minutes later, this time with the camera off.

The disciplinary commission describes what happened as a "clear lack of respect" from the judge.