Let's take a closer look at today's earthquake with reporter Seo Dong-gyun. Q. What is the earthquake situation? [Reporter Dongkyun Seo: Yes, I think many people are surprised by the vibration in the morning. 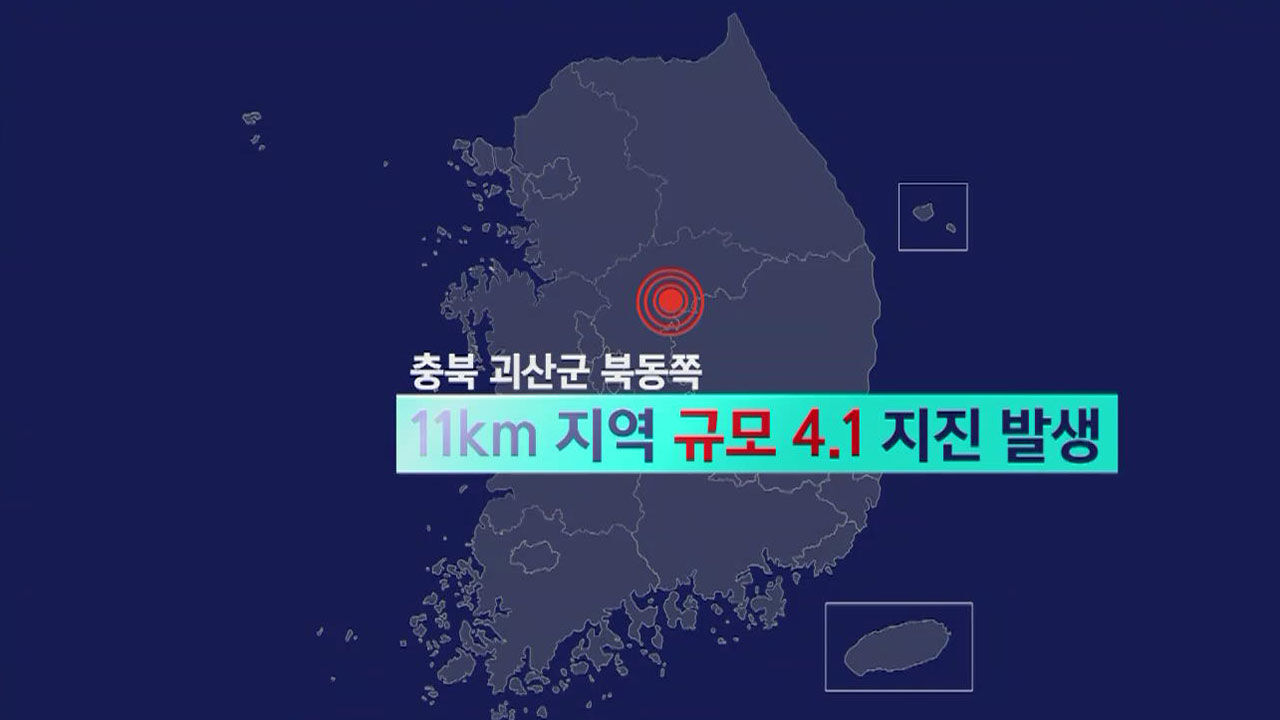 Q. What is the earthquake situation?

[Reporter Dongkyun Seo: Yes, I think many people are surprised by the vibration in the morning.

It is about 11km northeast of Goesan-gun, Chungcheongbuk-do.

About 16 seconds later, another earthquake with a magnitude of 4.1 occurred again.

The maximum seismic intensity calculated by quantifying the vibrations we feel was detected in North Chungcheong Province of 5, Gyeongbuk 4, Gangwon, Gyeonggi, and Daejeon, and vibrations were also detected in Seoul and Jeju Island.

A seismic intensity of 5 is enough to shake a bowl and break it.

Statistically alone, an earthquake with a magnitude of 4.0 or greater occurs once a year in Korea.]

Q. Was there any activity that could cause an earthquake in this area?

[Reporter Dongkyun Seo: First, experts are investigating the fault zone in this area.

First of all, it is estimated that the earthquake was not caused by external factors like the Pohang earthquake because the depth of the occurrence is about 12 to 13 km.

Q. Will aftershocks be a problem in the future?

[Reporter Dong-gyun Seo: Yes, first of all, the Korea Meteorological Administration considers the magnitude 4.1 earthquake that occurred at 8:27:49 am today as the main earthquake.

But, as you said, aftershocks are a problem.

The magnitude and duration of an aftershock are proportional to the size of the main earthquake.

Aftershocks occur in the process of releasing the elastic energy remaining around the fault after an earthquake.

Fortunately, the magnitude of the earthquake is not as large as that of Gyeongju and Pohang.

In areas where earthquake resistance is not well designed, even if an earthquake with a magnitude of 3.0 or greater occurs, damage may occur, so you should prepare for the remaining aftershocks.]

What to do in case of an earthquake?

[Reporter Seo Dong-gyun: When you feel an earthquake, you have to protect your head first.

You should cover your head with a book or a cushion and go under the desk to protect your head.

Then you need to move to a safe place.

When traveling, you should use the stairs rather than the elevator.

It is dangerous to move when there is vibration, so it is better to move after the vibration has stopped. The best way to avoid an earthquake is to move away from glass or walls as much as possible and go to a flat area such as a school playground.]

[Reporter Dongkyun Seo: Forecasting is not impossible at all.

What used to be called Yeji, is now called Forecast.

Long-term and medium-term, we're talking about a chance that literally happens once every few years.

Of course, what we most need is a short-term forecast, which is scientifically impossible.

This is the reason why such preemptive preparations are necessary by properly designing the earthquake-resistant design, keeping in mind the above-mentioned actions and the fact that an earthquake can occur basically anywhere.]