"The international character of the struggle": the FSB published documents on the participation of the NKGB of the USSR in the Slovak uprising of 1944

The FSB of Russia publishes archival documents on the participation of operational groups of the 4th (off-front) directorate of the NKGB of the USSR in the Slovak national uprising against the Nazi occupiers and the regime of Josef Tiso who collaborated with them. The published special reports dealt with the military-political situation that developed in Slovakia in September 1944, the struggle of Slovak partisans against the Nazis, and what assistance the Soviet special services provided to local anti-fascists. According to historians, the documents published by the FSB emphasize the international nature of the struggle against Nazism of the peoples of Europe and the significant contribution of the Soviet Union to it. 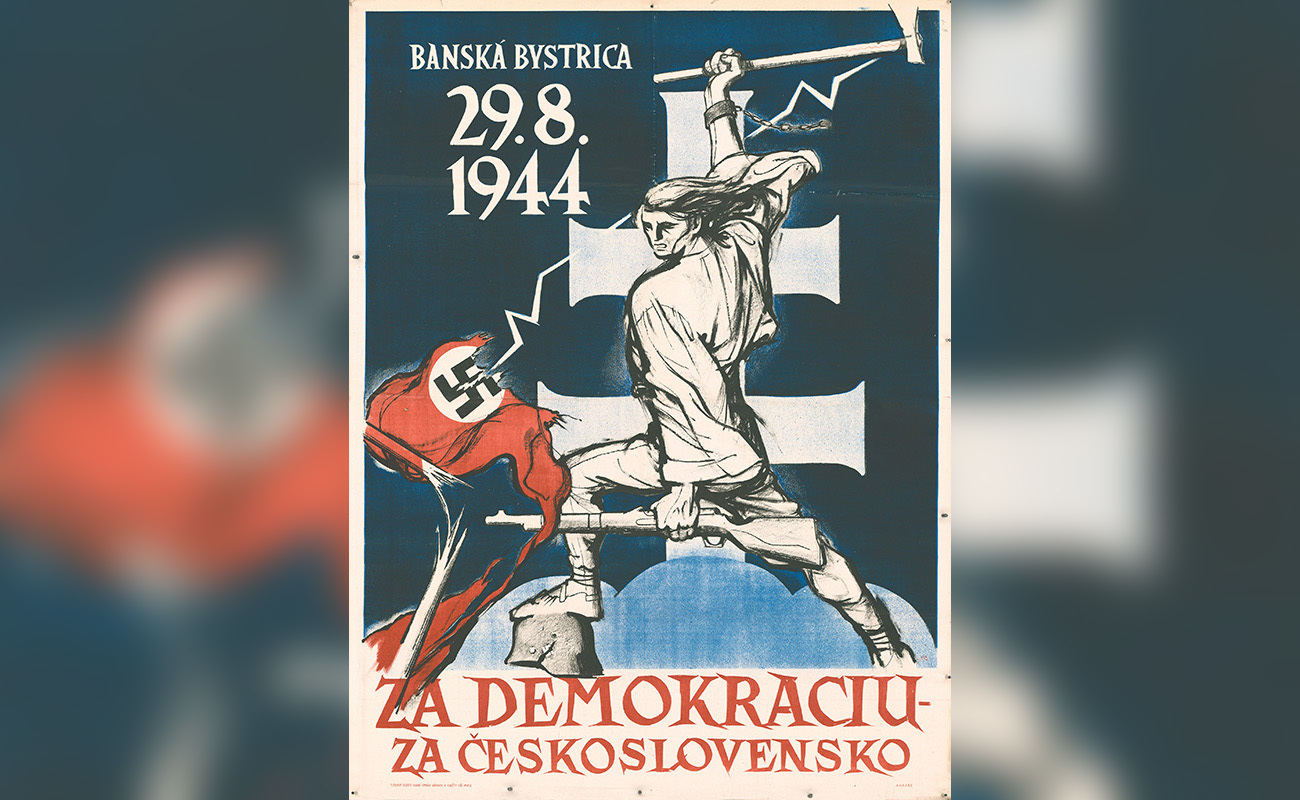 The FSB of Russia publishes declassified documents that tell about the participation of operational groups of the 4th (off-front) department of the NKGB of the USSR in the Slovak national uprising against the Nazi invaders and the regime of Josef Tiso who collaborated with them.

Archival special reports deal with the course of the uprising and the specific assistance provided to the Slovak patriots by the employees of the NKGB of the Soviet Union.

During World War II, the puppet regime of Josef Tiso, which was under the control of Nazi Germany, existed on the territory of Slovakia.

The Slovak economy was completely subordinated to the needs of the Third Reich.

On the territory of Slovakia, supporters of anti-fascist forces and Jews were persecuted.

On April 30, 1941, a Slovak-German agreement was signed on the presence of German troops in Slovakia.

Despite the repressions, a resistance movement was active in Nazi-occupied Slovakia, and in December 1943 the Slovak National Council was created, which united the largest opposition forces on the basis of the fight against Nazism.

In 1944, members of the council began preparations for a large-scale uprising against the Nazi occupiers and the Tiso regime.

Documents declassified by the Central Archive of the FSB of Russia indicate that on June 26, 1944, the operational groups of the NKGB of the USSR "Hunters" and "Olympus" under the command of the heroes of the Soviet Union, State Security Lieutenant Colonel Nikolai Prokopyuk and State Security Major Viktor Karasev, broke through the German encirclement in the Bilgorai Forest (the territory of modern Poland ) and, waging heavy battles with the Nazis, reached the Slovak border in July.

In parallel, in July 1944, the landing of Soviet troops began on the territory of Slovakia, who assisted local patriots in the formation of partisan detachments from Slovaks and former prisoners of war who had fled from Nazi camps.

In August, the Soviet operational groups "Hunters" and "Olimp" crossed the Slovak border and launched active hostilities in the rear of the German troops.

They regularly transmitted intelligence information about the military-political situation in the country to Moscow.

According to historians, on August 9, 1944, the Slovak army refused to carry out Tiso's orders to fight the partisans.

The situation in the country escalated sharply.

The collaborationist regime called on Nazi Germany to send its troops to fight the Slovak anti-fascists.

“He formed combat units from Slovaks”

On August 29, 1944, Jan Golián, Chief of the General Staff of the Slovak Army, who had long collaborated with the anti-fascist underground, ordered the start of an uprising against the Nazis in Slovakia and the transfer of parts of the Slovak army to the side of the rebels.

The center of the uprising was the city of Banska Bystrica, through the radio station of which the leadership of the underground announced an appeal to the people of Slovakia to join the armed uprising against the Nazis and their accomplices.

On September 1, 1944, the Karasev task force informed Moscow about the events taking place in Slovakia.

Three days later, in another radiogram sent to the center, Karasev said that the Nazis had arrested the commander of the Eastern Group of the Slovak Army, General Malar.

According to the task force, on the territory of Slovakia, German troops, on suspicion of unreliability, captured all the garrisons, in which there were from 200 to 2 thousand Slovak soldiers and officers.

The Germans began to disarm the Slovak soldiers and, together with civilians, were placed in camps.

The Slovak military began to leave for the forests.

Karasev emphasized that the struggle against the Nazis took place in Slovakia spontaneously, without centralized leadership.

In a special message of the 4th department of the 4th department of the NKGB of the USSR addressed to the People's Commissar of State Security Vsevolod Merkulov dated September 4, it is noted that up to 1.5 thousand Slovak infantrymen, a battery of 105-mm cannons, a battery of 100-mm cannons were located in the area where the Karasev task force was based , a battery of 75-mm mountain guns, two batteries of 37-mm anti-tank guns, ten mortars, up to 25 heavy and 50 light machine guns, as well as 73 cars and a motorcycle.

Karasev, at the request of the Slovak officers, formed combat detachments from the Slovaks and set them specific tasks in the fight against the Germans, ”the document emphasizes.

“In organized detachments as a combat nucleus of comrade.

Karasev pours in five to ten people from among the fighters and commanders of the task force ... At present, the task force, with the support of Slovak detachments, is fighting strong battles with enemy infantry and tanks 15-20 km from the base.

Recently, the Germans began to use heavy artillery in battles, ”Sudoplatov said.

On September 11, Sudoplatov reported to the People's Commissar of State Security that a radiogram had been received from the task force of Lieutenant Colonel Prokopyuk about the situation in Slovakia.

“The Minister of Defense of the new Slovak cabinet, Stefan Hasek, began organizing punitive troops from among the Slovak soldiers and officers.

He allegedly managed to gather 30 thousand Slovaks and supply them with weapons taken by the Germans during the disarmament of individual parts of the Slovak army.

At present, the Germans are carrying out extensive propaganda among the Slovak population calling for an active struggle against the partisans, ”the radiogram said.

On September 12, 1944, Sudoplatov sent a special message to the leadership of the NKGB of the USSR: “The operational groups operating on the territory of Slovakia, Lieutenant Colonel of State Security Comrade.

Karaseva and Kovalenko, in connection with the occupation of Slovakia by the Germans, began to create partisan detachments and combat groups from among the officers and soldiers of the Slovak army who did not want to cooperate with the Germans ... In recent days, the operational groups of TT.

Prokopyuk and Kovalenko, a new formation of Slovak partisan detachments was formed.

According to Sudoplatov, Prokopyuk put forward a proposal to transfer to Slovakia a group of officers from the Czechoslovak Corps operating in the USSR, arguing that the fighters of the partisan detachments he created did not fully trust their command, consisting of officers of the Slovak army.

“To help the rebels, the Soviet Union carried out the East Carpathian operation in September-October 1944, but, unfortunately, the Nazis managed to block the main Carpathian passes, and the main forces of the Red Army failed to break through to help the participants in the uprising.

However, the USSR Air Force created an air bridge, with the help of which hundreds of tons of weapons and explosives were transferred, as well as organizers for the formation of partisan detachments, ”said Dmitry Surzhik, executive secretary of the Association of Historians of the Union State, in a conversation with RT.

As historians note, the German command had to throw about 30 thousand military personnel against the participants in the Slovak uprising, including two tank divisions.

In October 1944, the Nazis managed to establish control over most of the areas previously liberated by the rebels and push the partisan detachments into the mountains, where they continued their armed struggle.

The Red Army, during the East Carpathian operation, captured the Dukel Pass and overcame the Main Carpathian Range, but on October 28 it was forced to stop its offensive.

Slovakia was completely liberated in the spring of 1945 as part of the Bratislava-Brnov offensive operation.

“Although during the events of August-October 1944, the Slovak anti-fascists and the Soviet command failed to fully realize their plan, the Slovak uprising had a significant impact on the course of the Great Patriotic War.

The Nazis were forced to divert large forces from the front that they needed in other directions, and suffered serious losses, ”Andrei Koshkin, a full member of the Academy of Military Sciences of Russia, said in a comment to RT.

According to Dmitry Surzhik, the Slovak uprising was the largest single anti-fascist demonstration in Nazi-occupied Europe, and the Soviet secret services played an important role in this process.

“The Slovak uprising was a kind of “review of the activities” of the anti-fascist forces, during which the interaction of various groups was worked out to fight Nazism at the final stage of the war.

The work of the Russian state security agencies in making public documents about these events is extremely important.

These special reports confirm the international nature of the struggle against Nazism in Eastern Europe and the contribution of the Soviet Union to this struggle.

Against the backdrop of modern attempts by some countries to rewrite history, this is very important,” summed up Dmitry Surzhik.