The great lively wine in that glass is... 160 years old

A century-old company invites experts to discover some of its best works since the time of its foundation in 1858. A privilege, without a doubt, but even more so if the company is called... 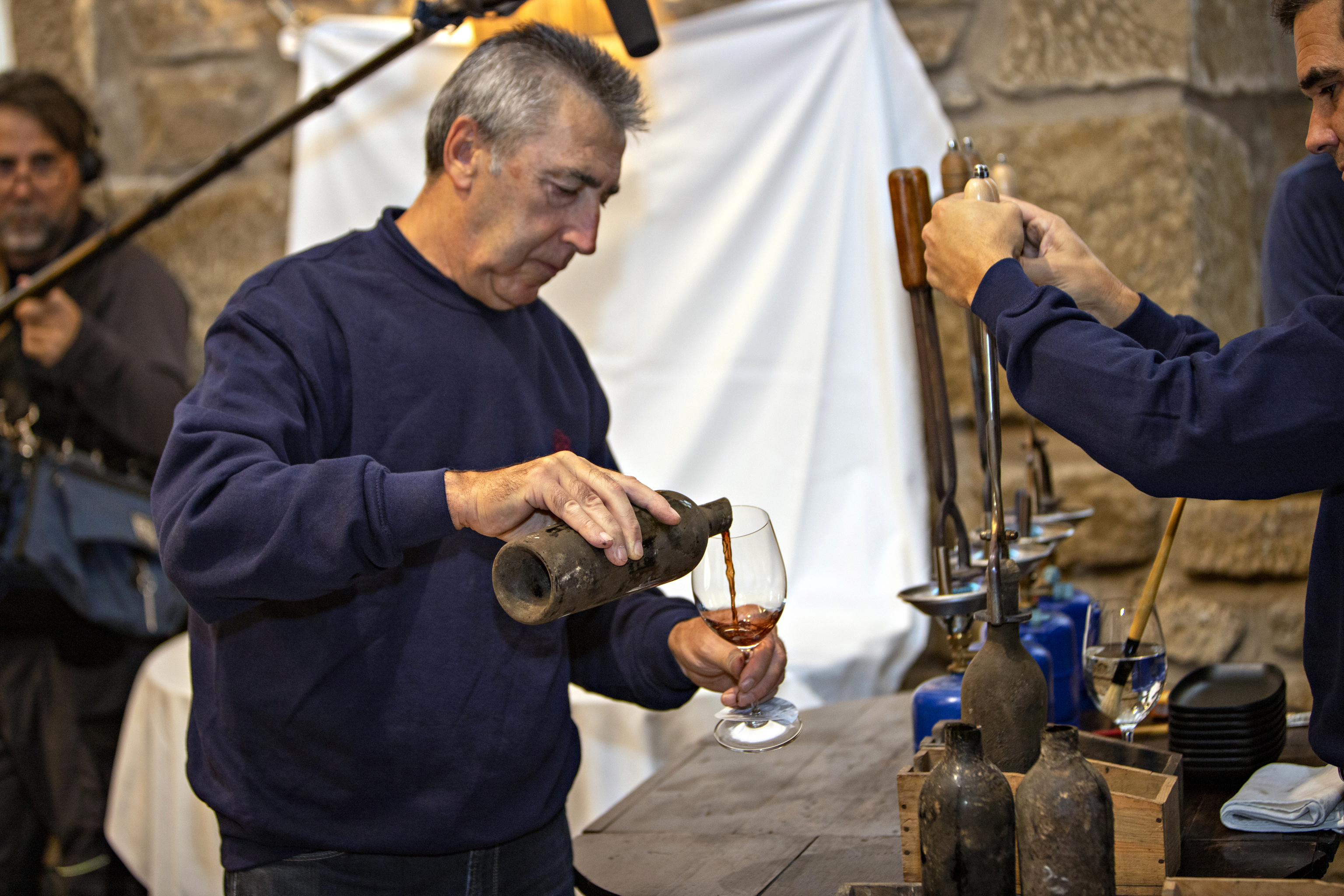 A century-old company invites experts to discover some of its best works since the time of its foundation in 1858. A privilege, without a doubt, but even more so if the company is called

and knowing its works means literally drinking them: before us, to begin with , a wine glass marked 'Marqués de Riscal 1862 Médoc Alavés', and in it some 160-year-old wine, totally alive, smooth and elegant. It was the first that the famous winery produced, and instantly we received a glass from 1863, and so on up to thirty vintages from the 19th, 20th and 21st centuries Probably no other winery in the world can mount a vertical tasting of such breadth, among other things because few have to keep

that represent all the vintages throughout a century and a half.

The event was the setting for the presentation of a wine with which Riscal rediscovered its history, as it has done on other occasions: this time it unveiled Las Tapias, its

first wine from a single vineyard

in a long time, which has also obtained the new qualification of 'singular vineyard' with which the DO Rioja recognizes exceptional old vines, something similar to the 'crus' of Burgundy.

In this case, a vineyard planted by Riscal in 1968 with old Tempranillo cuttings on a classic Rupestris de Lot rootstock that greatly respects the character of the vinifera.

We tested the 2019, too young but finer than powerful and with interesting aging potential.

Inevitably, however, the potential attracts less attention than the reality.

And for ageing, the privileged attendees at the tasting, in the depths of the classic Elciego winery, were able to admire, after that foundational 1862, those of

the pre-phylloxera wines, all from the 19th century

In the audience were

The other tasters were of lesser rank, but just as lucky and incredulous about this phenomenon that is the longevity of a great dry red wine.

And it was not the first time that we verified that not even Bordeaux produces wines as long-lived as Rioja.

One of the participants in the Marqués de Riscal tasting.

This fact is curious, because due to their more powerful structure, the grapes of the dominant varieties in Bordeaux, those of the Cabernet family, would seem more suitable for aging than the Rioja Tempranillo.

But the skillful combination of Tempranillo

with Mazuelo, Graciano... and Cabernet Sauvignon

, which grow on its sandy and limestone soils, gave Rioja what seems to us to be its secret advantage.

Riscal is the key foundational piece of that history.

In Rioja, wine was a product for family or local consumption, rudimentarily produced in wine presses in each house.

tried to bring there the vineyard techniques that had made Bordeaux, its near-neighbor, a powerhouse for wine, but their experiments did not last, although 25 years later Murrieta was finally able to Open your own warehouse.

Guillermo Hurtado de Amézaga, Marquis of Riscal, another liberal exiled in Bordeaux itself, was the one who finally launched Rioja... but from the beginning with that double affiliation, that of the land and that of the Bordeaux example.

In fact, he did it within that experimental framework, that of the Médoc Alavés, launched in 1862 by the Álava Provincial Council, hiring the cellar master -oenologist, we would say today- Jean Pineau to introduce Bordeaux techniques, such as barrel aging Oak.

The Médoc Alavés initiative did not last long due to lack of means, disappearing in 1868. But Riscal hired Pineau, who laid the foundations for it.

From Pineau to the modern Guimberteau or Pontallier, until recently there were always Bordeaux advisers in the great Elciego winery.

Phylloxera, attacking France 20 years before Spain and killing its wines until the American vine rootstock solution was found, did the rest, propelling our exports and our production during those two decades.

What happened the other day in Elciego is that every step of the way was tasted in a glass of wine from that era, and no other winery can do that.

And there the tasters were stunned.

Not all the vintages have evolved equally well, and some problem with TCA ("cork", in the popular expression) appeared in some of the bottles that, in the Riscal style, were decapitated with a hot iron to avoid having to touch, precisely , Cork.

But none were dead.

We will remember that 1871, very fine and immutable, that we already knew 10 years ago, that powerful, tasty and dark 1889, the youthful freshness of that 1918 -already after phylloxera- and the greatness of power, elegance and complexity of that already famous 1945 , perhaps the best Spanish wine of the 20th century.

Bettane, wine guru in France, said of it, in this Elciego tasting, that it

was the best red he had ever tasted.

General view of the tasting.

The 1945 has a 'trick', a sample of the double Rioja and Bordeaux soul of Marqués de Riscal: the winery planted several French varieties in 1852 and has always kept some Cabernet Sauvignon.

In the 1940s and 1950s he produced a small amount of Reserva Médoc, a confidential wine, and that mythical 1945 belongs to that series: it is very much cabernet sauvignon.

Precisely Barón de Chirel, with 20-30% cabernet, has been a successor to those Reserva Médoc for 36 years, and we tasted five interesting vintages.

Instead, Tapias is pure Tempranillo.

With the great improvement of the vineyard directed in the last four decades by the technical directors -and descendants of the founder- Francisco Hurtado de Amézaga and his son Luis, the result is once again great wines, with native or Bordeaux grapes.

And this exhibition before the international chair has shown it without the need for advertising or public relations: the results were in the cups.