"Win back the sky from the enemy": how the legendary Yak-9 fighter was created and improved

On October 1, 1942, the first flight was made by the Yak-9 aircraft, which became the most massive fighter of the Soviet Air Force during the Great Patriotic War. In total, over this period, Soviet factories handed over almost 15 thousand such vehicles to the troops. In addition to excellent aerodynamics, the Yak-9 was distinguished by ease of control and unpretentiousness in operation on unpaved airfields. During the war, several modifications of the fighter were produced, including those with the NS-37 large-caliber gun. According to experts, the appearance of the Yak-9 allowed the Red Army to improve the cover of strike aircraft and conduct successful air battles with the Luftwaffe. 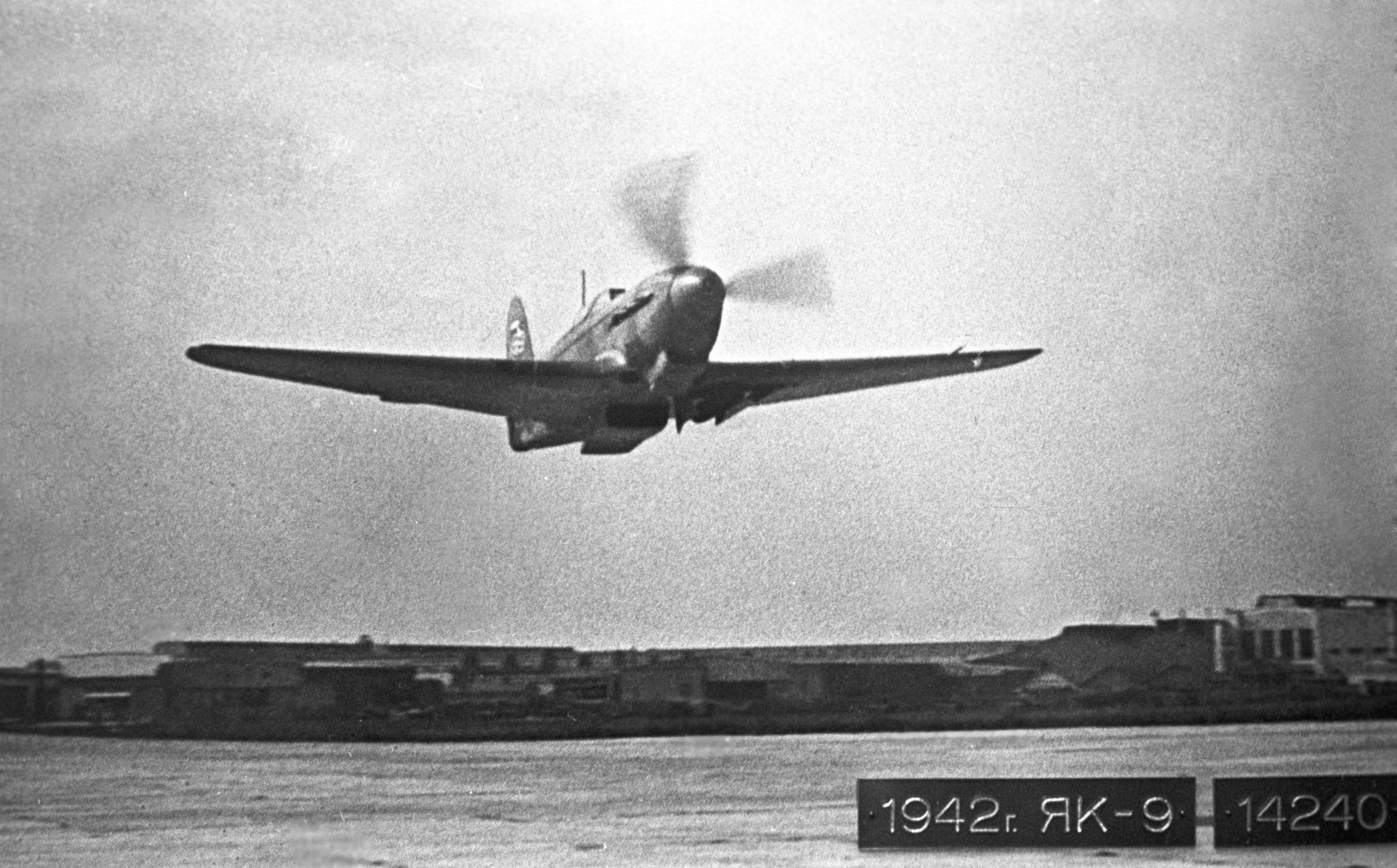 80 years ago, the Soviet combat aircraft Yak-9, which was destined to become the most massive fighter of the USSR Air Force, took to the air for the first time.

The machine was successfully tested and at the end of 1942 received a baptism of fire on the Stalingrad front.

Aircraft production continued for another three years after the Victory.

As Alexander Mikhailov, a specialist historian of the Victory Museum, explained in a RT commentary, the creation and rapid deployment of large-scale production of the Yak-9 made it possible to equip the Red Army Air Force with modern fighters at that time.

“The production of the Yak-9 was deployed in evacuation, far from the reach of German air raids.

Only one Novosibirsk aviation plant produced about 20 aircraft per day.

Such pace made the Yak-9 the most massive fighter of the Red Army, saving the Soviet Air Force from the shortage of modern machines of this type, ”Mikhailov emphasized.

The Yak-9 belongs to the galaxy of the legendary air defense aircraft of the Soviet Union.

The fighter was created by aircraft designer Alexander Yakovlev based on the Yak-7 aircraft.

These machines mainly differed in the wing - in the Yak-9, the wooden spar (butt joint, one of the main power elements) was replaced with a metal one.

This gave an advantage in weight and allowed to increase the volume of fuel tanks.

Also, a more powerful M-105PF engine was installed on the aircraft.

As a result, Yakovlev managed to create a maneuverable vehicle with an increased flight range.

The new Yakovlev Yak-9 aircraft was close to the best German aircraft in terms of speed and rate of climb, but surpassed them in maneuverability, ”says the 7th volume of the WWII encyclopedia prepared by specialists from the Russian Ministry of Defense.

As the historian, military expert Boris Yulin explained in an interview with RT, the main task in the design of the Yak-9 was to generally improve the combat characteristics of Soviet fighters.

“The“ first-born ”Yak-1 had a lot of so-called childhood diseases and various technical shortcomings.

A real breakthrough was the creation of the Yak-7, which received additional internal volume, better handling and large chassis wheels, which allowed it to land on less prepared airfields.

However, the Yak-7, as the experience of the war showed, needed modernization, ”said Yulin.

Yulin called the main advantages of the "nine" the relative ease of control, unpretentiousness in operation on unpaved airfields and the aerodynamic layout, which provided high maneuverability in the horizontal and vertical planes.

“If we compare the Yak-9 with German fighters, for example, the Messerschmitt Bf.109 (Me-109) in the modification of 1942-1943, then it had an advantage in maneuvering - it was lighter and had better turn.

If we talk about the Allied fighters, then, for example, the P-40 or the Hawker Hurricane were worse than the Soviet machine in terms of their total characteristics, ”says Yulin.

The fighter was armed with one 20-mm ShVAK cannon or two machine guns of 12.7 mm caliber.

In March 1943, Soviet pilots conducted two training air battles between the Yak-9 and the captured Messerschmitt Bf.109 in the G-2 (S-2) variant, equipped with five-point weapons.

The purpose of the experiment is to compare the practical capabilities of machines.

In a document prepared for the Air Force Research Institute, it was reported that the Me-109 has an advantage only in vertical maneuver at altitudes of more than 4.5 km.

At the same time, at altitudes up to 5 km in the horizontal plane, the Yak-9 entered the tail of the German aircraft through two turns, which automatically meant its defeat.

“The Yak-9 aircraft has a better view of the rear hemisphere and has less inertia, which allows the pilot in air combat to more prudently and energetically perform a combat maneuver, ahead of the Me-109 S-2,” the report says.

The appearance of the Yak-9 Alexander Mikhailov calls a great achievement of the Soviet aviation industry.

According to him, the development and mastering of the production of the Yak-9 fell on the difficult initial period of the Great Patriotic War, when there were few new types of aircraft in the USSR.

“The aviation fleet consisted mainly of I-15 and I-153 fighters and their modifications, as well as I-16.

They were good aircraft in the mid-30s of the last century, but morally and technically obsolete by the beginning of the 40s.

The appearance of the Yak-9 made it possible to largely correct this situation and create the prerequisites for retaking the sky from the enemy, ”Mikhailov explained.

At the same time, the brainchild of Yakovlev can hardly be called an exemplary fighter: according to experts, the experience of combat use has shown that the Yak-9 needs to improve its speed, and in some cases, its range.

In March 1943, instead of the basic model of the fighter, the Soviet industry launched the production of the Yak-9D and until May 1944 handed over to the troops over 3 thousand of these machines.

To increase the flight range, two gas tanks were additionally placed in the wing consoles of the Yak-9D.

After that, the aircraft could cover up to 1400 km.

In the subsequent modification of the Yak-9DD, adopted in 1944, this figure reached 1800 km.

“The designers literally showed miracles of skill by placing another 150 kg of fuel in the wing and fuselage.

Such ranges were in demand in bomber escort operations at the end of the war, when the relocation of airfields could not keep up with the rapid advance of our troops, ”the 7th volume of the encyclopedia of the Second World War of the Ministry of Defense of the Russian Federation notes.

To improve the firepower of the Yak-9, Soviet specialists experimented with installing a 37 mm NS-37 cannon designed by engineers Alexander Nudelman and Alexander Suranov.

In the report of test pilot Major Khomyakov dated March 11, 1943, it was reported that the Yak-9 with a large-caliber gun did not differ from the serial model in terms of piloting technique.

The officer considered a strong recoil when firing at speeds of the order of 280-400 km / h as a certain inconvenience.

However, when accelerating to 400-500 km / h, this effect was almost imperceptible.

As a result, Khomyakov recommended that the command take the Yak-9 with a 37-mm cannon into service.

“The Yak-9 aircraft, armed with a 37 mm OKB-16 cannon, will show good results when firing at bombers, convoys, anti-aircraft points, enemy airfields, other targets, as well as in air combat with enemy fighters,” Khomyakov emphasized in his report .

The modification of the brainchild of Yakovlev with the NS-37 was named Yak-9T.

According to the Ministry of Defense of the Russian Federation, from March 1943 to June 1945, the domestic industry produced 2.7 thousand of these fighters.

In comparison with other similar guns, the NS-37 was distinguished by the best indicators in terms of reliability, dimensions, weight, rate of fire, and was more technologically advanced.

The gun was installed in the collapse of the Yak-9T engine blocks.

She was distinguished by unpretentiousness and sometimes destroyed Luftwaffe aircraft with one shot.

Along with the armament, the speed characteristics of the Soviet fighter were also improved.

For example, the Yak-9U modification was equipped with a more powerful engine.

When diving, the aircraft accelerated to 700 km / h.

Equal to the enemy

As noted in the materials of the Ministry of Defense of the Russian Federation, the flight and combat capabilities of the Yak-9 and other Soviet fighters a priori worsened the need for a fairly wide use of wooden elements.

The tree replaced scarce aluminum, which in the aviation industry was mainly used in the manufacture of bombers.

“All modifications of Yakovlev's fighters had wings with wooden ribs and plywood sheathing.

The fuselage was welded from steel pipes and covered with percale (a canvas impregnated with a special varnish).

The plumage was also percale, ”says the 7th volume of the encyclopedia of the Second World War of the Ministry of Defense of the Russian Federation.

Despite this significant drawback, Alexander Yakovlev was able to create modifications of the Yak-9, which became good helpers in the fight against the Luftwaffe and enemy ground targets.

According to Alexander Mikhailov, Yakovlev's talent manifested itself primarily in the development of an outstanding aerodynamic layout.

The achievements of the domestic engine-building industry, which constantly improved the engines of the M-105 family, were also of great importance.

“The Yak-9 gave Soviet pilots the opportunity to fight the enemy on an equal footing at the main echelons of heights, where air battles were fought or there was a need to escort bombers and attack aircraft.

At the same time, by the end of the war, improved versions of this aircraft were already superior in performance to German fighters, ”summed up Mikhailov.