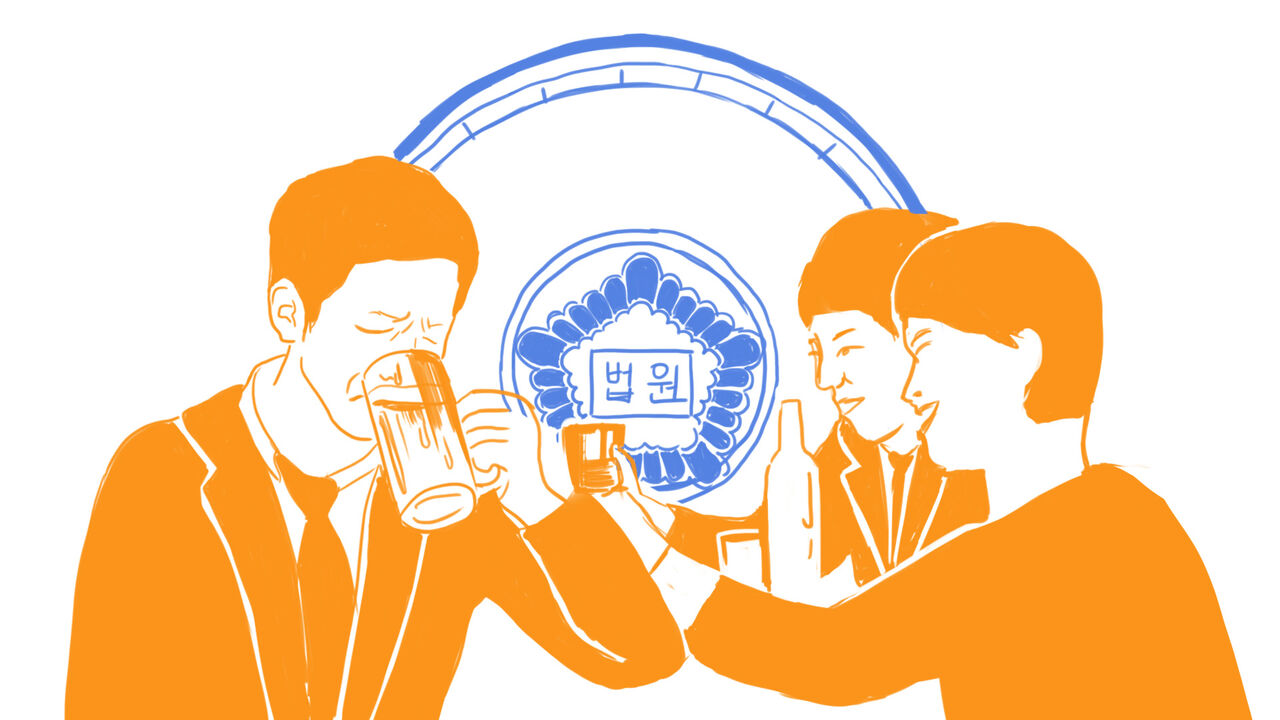 Do you remember the 'Lime drinking scandal' that shook the world?

Two prosecutors were not charged, but one prosecutor and a former prosecutor were brought to trial, and the court of first instance also acquitted them.

'How much did each person receive?'

This was also an issue in the trial, but the court has fewer calculations than the prosecution's.

There were first trial sentences against former Star Mobility Chairman Kim Bong-hyun, a key figure in the 'Lime Situation', and former and current prosecutors accused of receiving alcoholic beverages from former Chairman Kim, and they were all acquitted.

From the investigation stage, the method of calculating the amount of entertainment per person was the biggest issue, and the court accepted most of the defendants' claims.

The court said, "Considering various circumstances, the evidence submitted by the prosecution alone does not prove that the entertainment value exceeded 1 million won at a time. Therefore, the charges in this case fall under the case where there is no proof of the crime and are judged not guilty," the court said. judged.

According to the Improper Solicitation and Graft Act (Kim Young-ran Act), if the amount of money received or provided at one time does not exceed 1 million won, a fine for negligence may be imposed, but it is not subject to criminal punishment.

The court's calculation of the amount of entertainment received by former and present prosecutors has decreased compared to the prosecution's indictment.

It fell below the criminal punishment standard of the Anti-Graft Act.

Why did this calculation come up?

Let's go back to the drinking incident 3 years ago.

The drinking service was held at a room salon in Cheongdam-dong, Seoul on July 18, 2019, and it was almost buried, but in early 2020, the 'Lime incident' occurred and former Chairman Kim became known to the world by exposing the fact that he served alcohol while in prison.

Let's first look at the calculation method of the prosecutor who investigated the case.

There are three prosecutors: former Star Mobility Chairman Kim Bong-hyun, who is a key figure in the Lime Asset Management case, and former prosecutor Lee Mo, and Prosecutor Na Mo.

All drinks were paid by former Chairman Kim, and the prosecution calculated that five people, including Chairman Kim, were entertained.

If you divide 5.36 million won by 5 people, the amount of entertainment per person is 1,072 thousand won.

Anyone who spends more than 1 million won must be prosecuted under the Anti-Graft Act (Kim Young-ran Act), which requires criminal punishment.

But here, the prosecution proposes a method of enveloping my family.

The two prosecutors returned home before 11 pm, but the additional cost (costs paid to the band and receptionist) after 11 pm was excluded from the amount they received.

In other words, the price of alcohol until 11 p.m. was 4.81 million won, so the cost of being entertained by these two people was 962,000 won, which was subtracted from the prosecution.

A parody photo of '990,000 won non-prosecution set for prosecutors' became a hot topic, but it was a satire on the prosecution's arithmetic.

Prime Minister Kim Bu-gyeom also said in relation to the promulgation of the 'Complete Inspection Act' (the law to completely deprive the prosecution of investigations) at the last cabinet meeting of the Moon Jae-in government, "How did you do that because the prosecutors said they were served with alcohol? Won?" and said, "The undisputed power must now be put in check."

It was calculated that 4.81 million won of alcohol before 11pm was served by 5 people, and an additional 550,000 won was served by 3 people.

However, during the trial, the defendants consistently argued that there were two more present at the time: Lee Mo, former Vice President of Lime, and former Executive Officer Kim, Mo.

He also argued that if the entertainment expenses per person were calculated according to this number of people, it would be less than 1 million won, so it would not be subject to punishment under the Solicitation and Graft Act.

This argument worked in the court, and the court saw it as "939,167 won when calculating the value of entertainment in light of the time the defendants attended the drinking party and the participation time of the former vice president and former administrator Kim, etc.".

The judgment has not been released yet, so it is not accurate, but it seems that 4.81 million won was calculated equally by 6 people and 550,000 won by 4 people.

'Drinking service case' without anyone being punished

At the last trial, the prosecutor's lawyer who was indicted said, "I admit that I was inappropriate as an incumbent prosecutor, but the stigma of 'Lime serving as a prosecutor' is hard to bear." I appealed, and the appeal was accepted because the verdict was acquitted.

However, there are also controversies surrounding the judgment of the first instance.

In this judgment, the 'one in n' calculation method, which was the reason for the non-prosecution of incumbent prosecutors, was mobilized in this judgment. Controversy arises because it has fallen.

After the two prosecutors who attended a drinking party in December 2020 were not prosecuted, no one has been punished for this case that made the world go wild as the defendants were acquitted at the first trial today.

A large fire broke out in an explosion at a pharmaceutical company's factory in Hwaseong, Gyeonggi-do, and it seems that the factory was bombed.

It is said that it was difficult to even enter the fire engine at the beginning of the accident.