In Spain there are thousands of towns and cities of medieval origin that preserve their heritage from that time almost intact. Stroll through its narrow and cobbled streets, between... 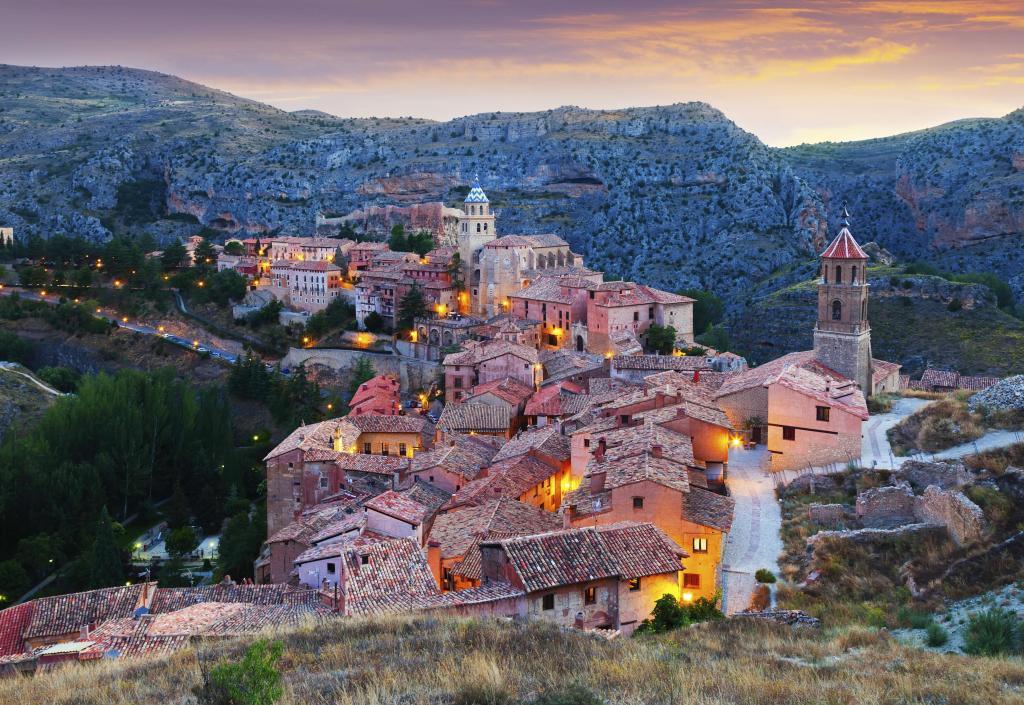 In Spain there are thousands of towns and cities of medieval origin that preserve their heritage from that time almost intact.

Strolling through its narrow cobbled streets, between old low-rise buildings, or through the battlemented doors of the walled enclosure to access the fortress of the day means moving to another era.

The beauty of these towns that dot our country is undeniable, in addition to being a huge tourist attraction that attracts thousands of visitors.

We propose an authentic trip to the past to seven of these walled towns, some of the best preserved in Spain.

It always occupies the first positions in the lists of the most beautiful medieval towns in Spain.

Its beauty is a claim that makes it also one of the most visited.

Perched on a rock, almost entirely surrounded by the Guadalaviar River, to the south of the Sierra de Albarracín, its charming old town, whose origin dates back to the 11th century, has the title of National Monument.

The town, with an irregular layout adapted to the difficult topography of the land, is protected by well-preserved 14th-century walls, inside which are also the Alcázar (11th) and the Cathedral of El Salvador (16th century).

We continue in Aragón to marvel at "The most beautiful town in Huesca", as this town is known that was born in the shadow of a castle of Islamic origin converted into the collegiate church of Santa María after the Reconquest.

The town has been declared a Historic-Artistic Site, and from the fortification comes the wall (some sections from the 11th century are still standing) that surrounds the historic center of the town with luxury viewpoints, such as the

Smile of the Wind

As important enclaves: the albarrana tower, the ruins of a quadrangular tower and some fragment of the Romanesque church, integrated into the impressive 14th century cloister.

To the north of the province of Castellón, this town of 2,500 inhabitants appears imposing at the foot of a cliff crowned by a spectacular castle built in the 13th century taking advantage of the rock where it is located.

Below, the historic center of the town with narrow cobbled streets is protected by medieval walls (14th century), which have a perimeter of 2,500 m, with an average height of 10 to 15 m and a thickness of about two meters.

The old town of Castellar, located to the southeast of the province of Cádiz, in the Campo de Gibraltar region, is nestled on a mountain from where you can see the Bay of Algeciras, the Rock of Gibraltar and even the coast of Africa.

Above, the imposing medieval castle built between the 12th and 15th centuries and perfectly preserved

the charming town within its walls.

The layout and structure of its whitewashed houses resembles some of today's Arab villages.

Inside is the Church of the Divine Savior and, attached to it, there is a passageway that joins it with the fortress.

Next to the town is the Alcornocales Natural Park, considered the green lung of the region.

Located on a promontory on the banks of the Lozoya River, at the foot of Somosierra and 75 km from Madrid, the beautiful town is also known as "The Wall of Madrid", due to the good degree of conservation of the wall, of Muslim origin (s. XI), which protects its historic center with a perimeter of more than 800 m.

Some sections of the wall, which contains numerous defensive elements, such as towers, a barbican, a moat, a corach, an albarrana tower and a fortress, reach 16 m in height and 3.5 m in thickness.

It is another of the best preserved medieval walled towns in Spain, located 35 km from Gerona.

A Romanesque bridge from the s.

XII on the river Fluviá gives access to the old quarter of the town where some 2,000 inhabitants reside.

Nestled in La Garrotxa and a step away from the Natural Park of the Volcanic Zone of that region, it is built around a castle from the 16th century.

X (now disappeared), erected on top of a hill.

Listed as a National Historic-Artistic Site, due to its spectacular monumental layout, the narrow and steep cobbled streets of the town cross enclaves such as the ruins of the

To the west of the province of Salamanca, next to Portugal, and irrigated by the waters of the Águeda River, is this city whose walls, witness to numerous sieges due to its strategic location, were built by order of King Ferdinand II of León in 1160. The two and a half kilometers of wall perimeter, taking advantage of the remains of a Roman wall, enclose the town, declared a Historic-Artistic Site in 1944. Intramuros, you should not miss strolling through the medieval streets full of palaces and stately homes (such as that of the Marquis de Cerralbo, that of the Miranda and the beautiful Palacio del Águila), or the Plaza Mayor with the Town Hall (Renaissance building from the 16th century).

In the highest part, the Castle of Enrique II de Trastámara (1372), with its three-storey Homage Tower, today houses the Parador de Turismo.