"The British created the conflict": how India and Pakistan became separate states

75 years ago, the British India Independence Act came into force, according to which the former possessions of official London in South Asia were divided along confessional lines into two separate dominions: the Indian Union and Pakistan. According to experts, the process of division of the former British India was organized in such a way as to give rise to a bloody conflict between the newly independent states, which has not been resolved to this day. 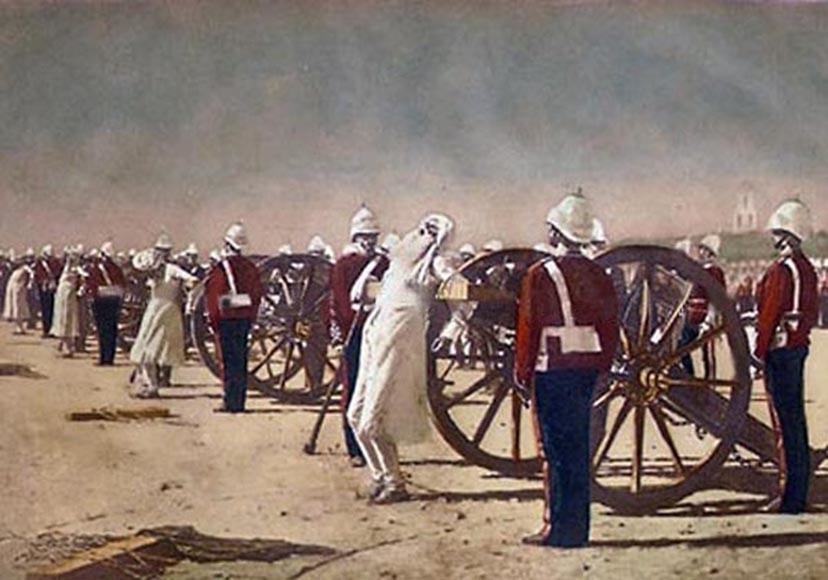 At midnight on August 14-15, 1947, the former British possessions in South Asia were divided into two independent dominions: the Indian Union and Pakistan.

The process of obtaining sovereignty was overshadowed by a large-scale territorial conflict that arose between the two young states.

By the 19th century, a significant part of the Hindustan peninsula was under the control of the British East India Company, which received from the padishah of the decaying Mughal Empire the right to manage on his behalf all the territories previously subject to the Mughal dynasty.

Representatives of the British company had powers that allowed them to independently collect taxes, maintain an army, exercise jurisdiction over civil matters and conduct monopoly trade in essential goods.

The British forced the sovereign Indian principalities to sign treaties, according to which they fell into vassal dependence on the company, depriving them of the right to conduct independent foreign policy and defense activities.

In the 1850s, the political situation in India escalated sharply due to the voluntaristic decisions of British administrators.

They deprived the local aristocracy of land, interfered in religious life, took away their land from farmers for debts, and ruined artisans by massively selling imported goods.

This led to the Indian Popular Revolt in 1857, which was brutally crushed by the British army.

In 1858, official London passed a law for the better government of India.

The British East India Company and the Mughal Empire were officially liquidated, and Queen Victoria of Great Britain acquired the status of Empress of India.

In the 1860s, administrative, legal and military reforms took place in India, as a result of which the influence of official London on the life of the local population increased.

Britain developed the Indian transport and industrial infrastructure, but at the same time, due to the English economic expansion, the leakage of funds from the colony to the mother country only intensified.

The standard of living of ordinary Indians did not rise.

In the second half of the 19th century, a national liberation movement began to form in British India, whose representatives advocated the revival of traditional Hindu and Muslim cultures.

In 1885, the Indian National Congress (INC) party arose, which was the spokesman for the interests of the Hindus who received a European education, and sought to reform the colonial regime.

Soon, a radical movement appeared among the followers of the INC, advocating the complete independence of India from Britain.

In 1906, the Muslim League was created, declaring itself to be the protector of the interests of the followers of Islam living in British India.

There was initially a normal working relationship between the Indian National Congress and the Muslim League.

Jinnah was even a member of the INC and, at the dawn of his political career, worked for some time as the personal secretary of an influential congressional figure, Dadabhai Naoroji.

By the early 1920s, one of the most popular figures in the Indian national movement was Mahatma Gandhi, who turned the INC into a mass movement and organized several successful civil disobedience campaigns against the British administration.

Against the backdrop of the intensification of the Indian national movement, the British tried to push together the supporters of Hinduism and Muslims.

This was expressed, in particular, in the inclusion of norms in the Indian electoral legislation, due to which political contradictions arose between representatives of various faiths.

In 1920, the Muslim League refused to support civil disobedience against the British, and Jinnah himself left the INC.

In the 1930s, the colonial administration turned to open forceful pressure on members of the Indian national movement, sending tens of thousands of its activists to prison.

Soon, an acute food crisis arose in the colony, which developed into a massive famine.

According to historians, the situation in India for the British administration was becoming increasingly difficult.

“Britain was weakening and was no longer able to manage such significant territories, and the national liberation movement evoked an increasing response from the Indian population,” said Tatyana Shaumyan, head of the Center for Indian Studies at the Institute of Oriental Studies of the Russian Academy of Sciences, in a conversation with RT.

The leadership of the INC declared support for the military efforts of Great Britain, provided that official London recognized India's right to self-determination.

However, the colonial administration initially refused a constructive dialogue with the INC.

In India, another wave of anti-colonial protests arose, to which the British responded with reprisals.

At the same time, the Muslim League did not want to join forces with the INC.

On March 23, 1940, she adopted the Lahore Resolution, which contained a demand to create states independent of British India with a predominantly Muslim population in the northwestern part of Hindustan.

In 1942, a special mission of the British government began to work in India under the leadership of Richard Cripps.

She negotiated with local political leaders, offering them to support the military activities of official London in exchange for granting India dominion status after the end of the war.

Cripps, Gandhi and Jinnah failed to reach a unified position.

The leadership of the INC was dissatisfied with the fact that concrete steps to grant India's independence were postponed to the post-war period, as well as with the demands of the Muslim League to separate Pakistan from India even before that independence was granted.

In 1946, a new government mission was sent to India to develop a specific constitutional mechanism for granting Indian independence.

In August of the same year, an interim government was formed in India, headed by the representative of the INC, Jawaharlal Nehru.

In response, the Muslim League stepped up efforts to create a separate state in Pakistan.

In February 1947, the British government issued a declaration on the final withdrawal of the British from India.

In June, the plan developed by the Viceroy of India, Louis Mountbatten, was made public, according to which two independent dominions were created on the site of British India: the Indian Union and Pakistan.

The future of the disputed regions with a mixed population was to be decided by referendums or votes in the legislature.

At midnight on August 15, 1947, the independence of British India came into force, divided from that moment into the Indian Union and Pakistan.

At the same time, the problem of determining the state border remained unresolved.

“Neither the one nor the other side was really satisfied with the terms of the partition.

Settlers poured in opposite directions - some went to the suddenly found "their" country in search of a better life (which was promised by politicians), some were fleeing persecution or massacre from neighbors who suddenly became enemies.

In the course of mass migration, up to a million people died, up to 15 million were displaced. The bitter memory of those events is still alive in India and Pakistan and fueled all military conflicts between them.

In the history of South Asia, this is the largest geopolitical catastrophe, ”said a senior researcher at the Institute of Asian and African Countries at Moscow State University named after M.V.

In the autumn of 1947, an armed conflict began between the Indian Union and Pakistan for the right to control Kashmir.

As noted in a conversation with RT, associate professor at Moscow State University.

Lomonosov Alexei Fenenko, the long-term conflict between India and Pakistan, which led to three full-scale wars and has not been resolved to this day, was the result of the activities of the British authorities and how British India was divided.

“The British did not allow a powerful unified state to arise, but instead created a conflict that can be managed by playing on contradictions.

For them, two states weakened by confrontation on the world stage were obviously better than one strong one, ”summed up Fenenko.