Sweat to recover from flood damage... People who volunteered after returning from the holidays

Restoration and search work were carried out wherever rain damage was concentrated, including in Chungcheongnam-do, which you can see now. Although it is still a difficult situation, many volunteers returned their work during the holidays and contributed their work. 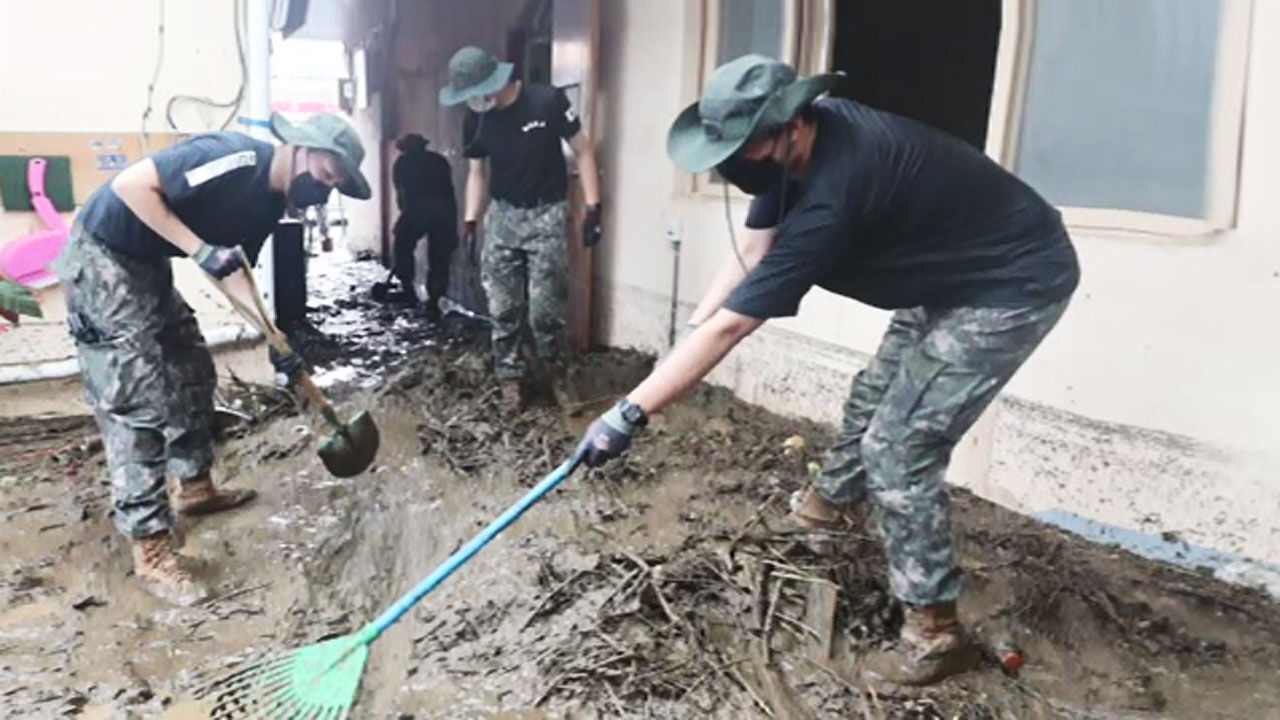 Restoration and search work were carried out in places where rain damage was concentrated, including in Chungcheongnam-do, which you can see now.

Although it is still a difficult situation, many volunteers returned their work during the holidays and contributed their work.

The house completely collapsed, leaving only the roof.

The roads are split and the rocks are removed with an excavator, and soldiers are mobilized for restoration work.

Cars lined up on a broken road.

When the road was cut off due to heavy rain, car owners just parked and evacuated.

Gangwon-do, which was heavily damaged by landslides.

A vehicle was buried among the rubble of a collapsed building, and the farmland was swept away by rain and lost in several places.

In the Seomgang River, a search operation was continued to find an elderly couple in their 80s who went missing due to the heavy rain.

14 people have died and 6 people have gone missing due to this torrential rain so far, and it has been tentatively counted, and 7,595 people from 7 cities and provinces have also evacuated.

[Heavy rain victim: There is water in here too.

you have to keep digging

Just by looking at it here (because it was full of water.)]

The house was flooded on the 8th, but after six days have not been able to restore it, we borrowed the help of volunteers.

[Heavy rain victim: There is no electricity, so what should I do?

I couldn't do it by myself, but I'm really, really grateful and I'm sorry.]

Volunteers are endlessly pulling things out of the house.

I have filled dozens of sacks, but since there are so many bags, there are not enough sacks.

Volunteers work hard to provide strength even in harsh environments.

[Kim Yongseung/Volunteer: It is filth, so if there is a wound, you can become infected, so be careful...

It's a holiday and I don't have anything to do, so I was wondering if there would be a place that needed volunteer work in the morning...

[Nami-Kyung/Volunteer: I am also a resident of Gwanak-gu, and when I came to the site, I couldn’t leave, so I keep coming.] A

[Kim Guk-hwan/Volunteer: Some people brought their own, and some we went to bring them.]

Volunteers who returned by the holidays.

Thanks to their warm hands, the victims are also gaining strength again.