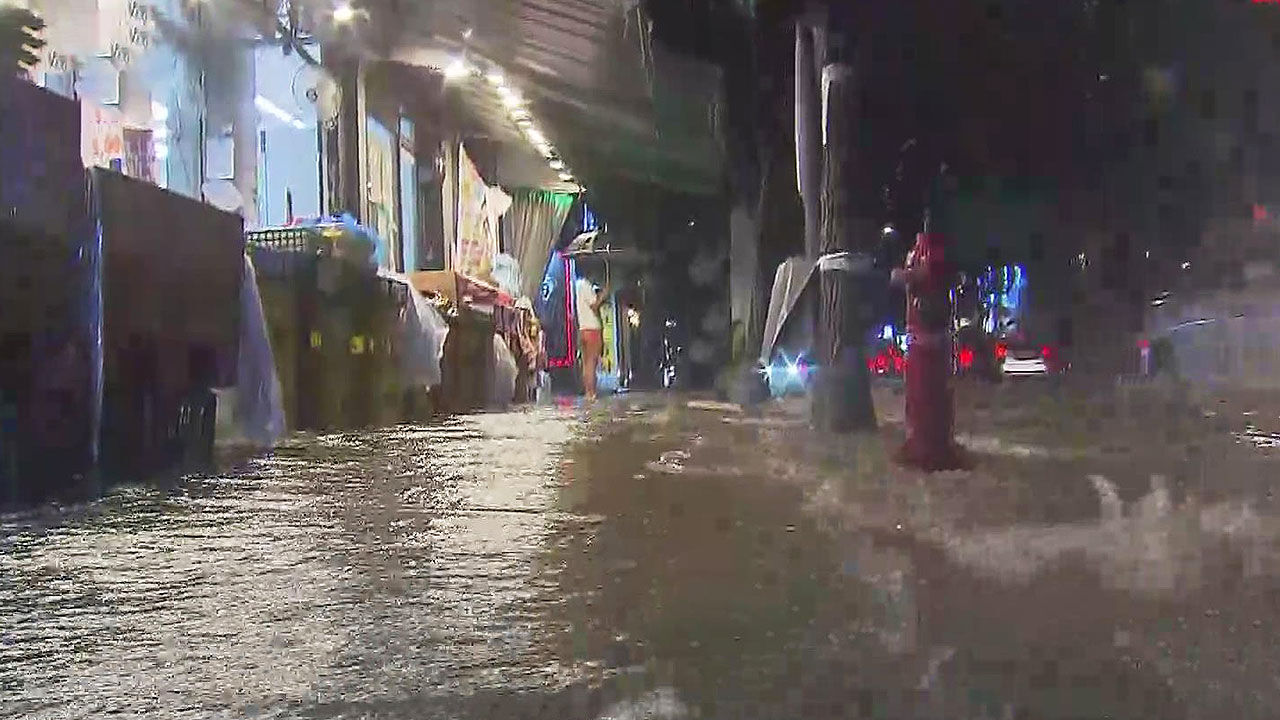 Then, let's take a closer look at the heavy rain situation with reporter Jung Gu-hee from the weather team.

It's raining heavily in the Gangnam area of ​​Seoul right now. Why is that?

About an hour ago, it rained a lot in the Gangnam area of ​​Seoul, and the characteristic of this rain is that rain clouds that extend east to west in a very narrow area are raining.

This area was now the southern part of Seoul, including Gangnam, Gwanak, and Dongjak-gu.

Now the rain clouds have moved a little to the south.

So, it is raining a lot right now, mainly in Gwangju, Gunpo, Yangpyeong, and Suwon.

(What's on the screen right now is the Gangnam situation, right?) Yes.

This was about an hour ago now.

CCTV is no longer being received in this area as well.

I was informed at the site that the water is a little less than that now.

But at its worst, you'll see the cars are blinking right now.

It's not like there are people inside, but there has already been a car at that location for 2 or 3 hours.

Apart from Gangnam, Seoul, the damage situation seems to be not easy. How is it now?

The part I am most worried about right now is the southern regions of Gyeonggi-do, such as Seongnam and Gwangmyeong.

There are a lot of reports coming in from SBS in these areas as well, but we keep getting reports of damage that the underground parking lot has been flooded.

There are also reports of cars being isolated because of too much water on the road.

As I mentioned earlier, as the rainy season front goes down a bit to the south, the damage seems to be increasing again, mainly in the southern part of Gyeonggi-do.

Now, in Gangnam, Seoul, the amount of precipitation is slightly less than before.

But now that Seoul has suffered so much damage, the capacity that can be processed per hour at Gangnam Station is only 85mm.

This was also expanded with the opening of the Banpocheon Basin Division Tunnel.

But today, it rained a whopping 116mm per hour in Gangnam.

It rained a lot.

There is also a record that 336mm rained in Seocho-gu.

That much came in a day, which is equivalent to the amount of rain that fell throughout the rainy season in Korea.

However, it rained more than 100mm for about an hour.

However, if you look at the current observation records in Seoul, the heaviest rain in the past 115 years was only about 120 mm.

In other words, it rained the most in the last 100 years.

Since it is a situation that can be seen like this, it is analyzed that it is a very unusual torrential downpour.

Although it rains more than 100 mm per hour, the sewage treatment capacity is only 80 mm per hour, so the road is flooded like this.

In the case of Gangnam now, especially since it is made of a lot of asphalt, there are not many areas that can absorb water from the ground.

So, it has been a habitual flooding area from the past, and now it is called a watershed tunnel, and facilities that can store more water are opened, but the treatment capacity is only 85mm per hour.

I've seen it on the screen before, but I've seen a lot of flooded vehicles. It's very dangerous to just stay in a submerged vehicle.

First and foremost, now that water enters the vehicle intake, it is connected to the engine, so the engine can be turned off immediately.

So the car can no longer be driven.

Of course, it will be difficult to escape from that situation.

And most of all, I delivered it today (the 9th), but there is a lot of flood damage, so there is a very high possibility that the door won't open.

So, when the wheels are locked by more than two-thirds, from this point on, you need to think more about safety and your own safety rather than your car.

From then on, there is a possibility of vehicle isolation, so from this point on, you must move the car to the highest possible place and move yourself.

If the car door is submerged in water, it just won't open.

In this situation, you will have to break the car window and escape, but it is not easy for ordinary citizens to come out through the car window.

So, at this time, you have to wait for the water to fill up and open the door when the water level outside is equal to the water level inside. This can be difficult in an embarrassing situation.

So, when the water fills up to the extent of the wheel, it is better to avoid yourself first.