Dabiz Muñoz announces the new location of DiverXo: it moves to Pozuelo, to a forest and with La Finca as a 'partner'

Dabiz Muñoz had already announced that DiverXO would change its location, that it would leave the ground floor of the NH Eurobuilding hotel in the capital to move to the outskirts, to a more... 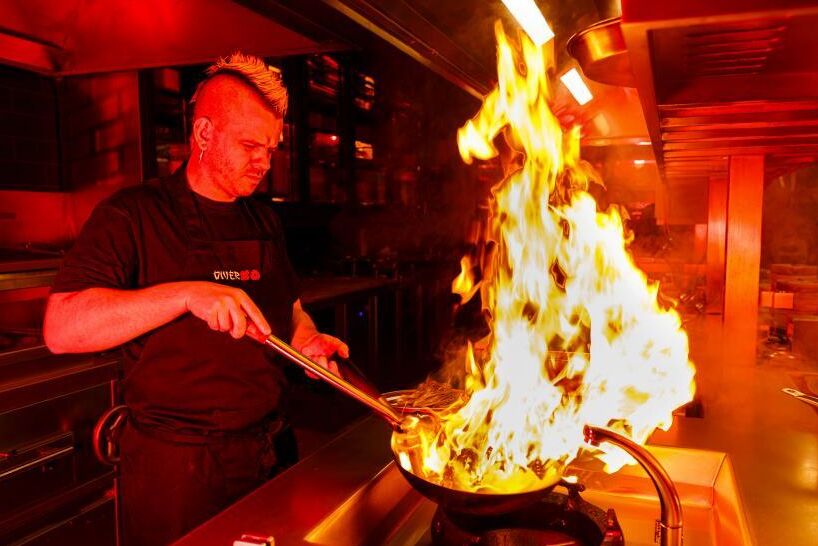 Dabiz Muñoz had already announced that DiverXO would change its location, that it would leave the ground floor of the NH Eurobuilding hotel in the capital to move to the outskirts, to a larger space surrounded by nature.

Now we know that this place is in Pozuelo, as he himself tells us on the phone, and that his new "partner is La Finca".

will be in a forest, it will have 1,900 square meters built

After the pandemic, the Madrid chef told his closest team that he wanted to redefine the concept of the restaurant, the only three Michelin stars in Madrid.

"I had renewed hopes and needed changes. It had been a time when I didn't enjoy what I was doing and I didn't manage it well".

The opening of the new

"Super DiverXo" is scheduled for the first quarter of 2024

"I want to do the project that allows me to get excited about setting up the best restaurant in history."

They haven't started construction on the building yet and they don't know who will do the decorating.

"Yes, I anticipate that it has a creative kitchen, three terraces... It's going to be incredible."

The chef made the announcement of the 'move' during his presentation at the last Madrid Fusión congress.

There he gave the first brushstroke of the novelties related to his flagship and also explained that StreetXO would change places "during the summer".

They closed on July 24 and plan to reopen "at the end of September or beginning of October."

In this case, the transfer is closer, since number 52 goes to 47 Serrano Street, to another El Corte Inglés building.

In the first quarter of 2023 this concept lands in Dubai.

A couple of months ago, Muñoz, chosen in 2021 as the best chef in the world, also started a new adventure in Madrid with

, his particular tribute to universal pasta and dumplings

The chef was once again on everyone's lips and met expectations.

Critics and audiences have embraced his new project, which in just 12 minutes filled reservations for the first two months.

There are many dishes that have been talked about in the new space, such as the pickled cold 'won ton' and the trumpet-of-death steamed muffin.

Since last Tuesday, it also opens at noon