"Quasi-colonial order": what were the consequences of the US war against the Philippines

120 years ago, US President Theodore Roosevelt declared an amnesty for all residents of the Philippine archipelago who fought against the American expeditionary forces sent to the islands to establish Washington's sovereignty over them. Thus, the three-year US war against the local population was over. Experts note that the colonial expansion in the Philippines at the turn of the 19th and 20th centuries largely predetermined the further expansionist course of US foreign policy. 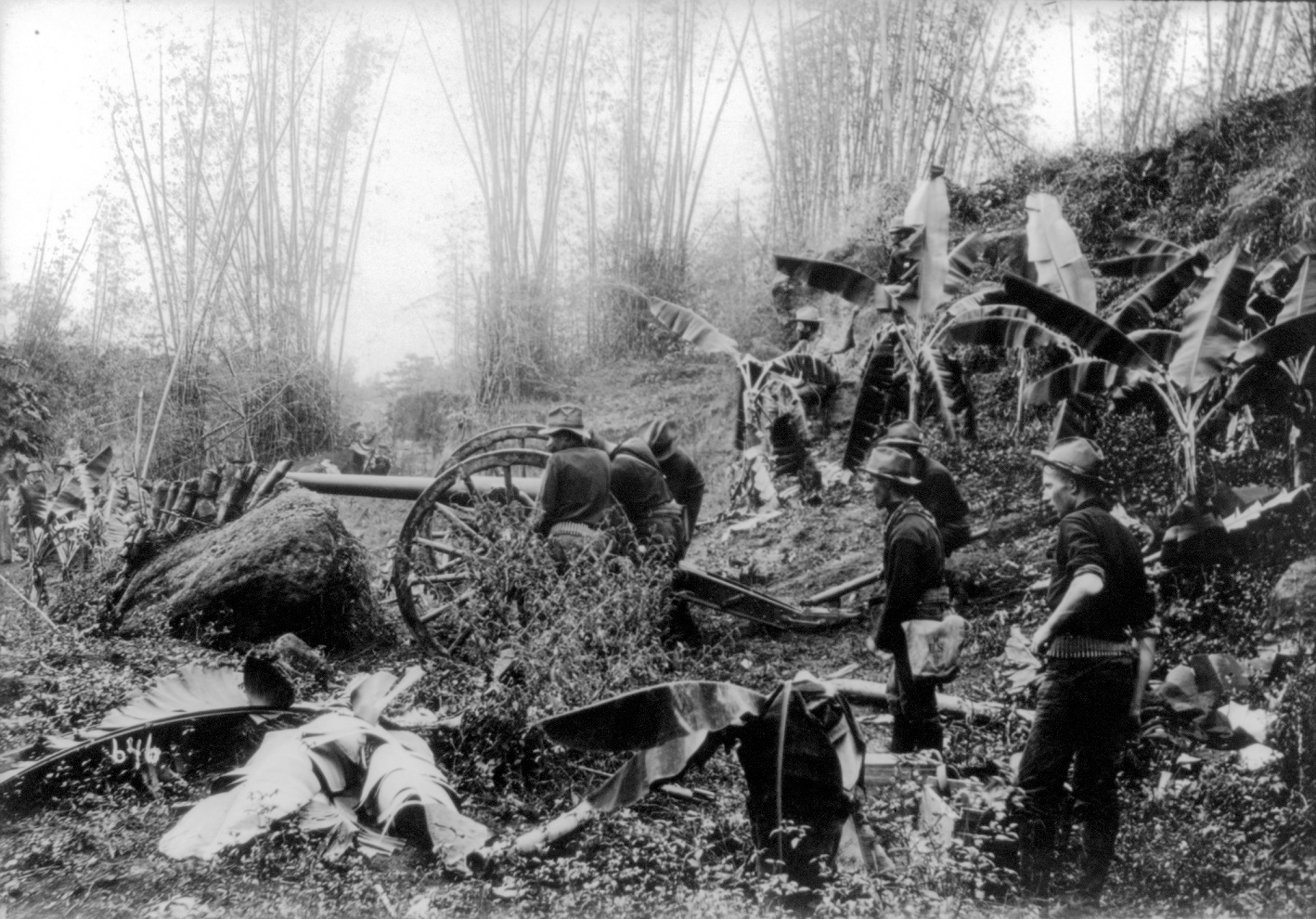 On July 4, 1902, US President Theodore Roosevelt declared the end of the war with the Philippines and granted a pardon to all the inhabitants of the archipelago who participated in the rebellion against American domination of their country.

Thus ended the three-year war with the local population of the Philippines, who wanted to free themselves from colonial oppression.

Following Roosevelt, US Secretary of War Elihu Ruth issued a special order in which, on behalf of the President, he thanked the US military involved in the conflict.

“The President expresses his gratitude to the officers, non-commissioned officers and enlisted men of the armed forces in the Philippines, both regular and volunteer, for their courage and resilience, invincible spirit and devotion with which they suppressed and put an end to the great rebellion that raged throughout the archipelago against legitimate sovereignty and the just authority of the United States,” the text of the order said.

The US-Philippines war was a de facto continuation of the US-Spanish War that began in 1898.

Washington has long been annoyed by the presence in Cuba of the colonial administration, troops and fleet of the Spanish kingdom, which directly contradicted the Monroe Doctrine, according to which the United States declared its right to prevent European powers from interfering in the affairs of North America.

The formal reason for the start of the war was the death of the American battleship "Maine", which sank in the bay of Havana after an explosion on board.

The Maine arrived in Cuba amid popular uprisings against Spanish colonial rule.

The explosion killed 266 people - most of the crew and marines aboard the warship.

This incident was widely covered by American newspapers.

The US press directly or indirectly accused Spain of blowing up the armored cruiser, despite the lack of direct evidence.

As a result, under pressure from political forces and public opinion, US President William McKinley declared war on the Kingdom of Spain.

After several naval battles with Spanish forces, the Americans managed to land and capture Cuba and Puerto Rico.

The second front of the war was the colonial possessions of Spain in the Pacific Ocean - the Philippine archipelago.

On May 1, 1898, the American fleet in a heavy battle completely destroyed the Spanish squadron in the Philippines, after which the US troops landed on the islands.

The Americans failed to quickly capture the capital of the archipelago - Manila - and they besieged the city.

Then the American command decided to take advantage of the fact that since 1896 there had been large-scale anti-Spanish unrest in the Philippines, but the rebels did not have the strength to finally get rid of the colonialists.

After that, American military leaders and diplomats reached an agreement with the local revolutionaries, and they joined the fighting against the Spanish.

Aguinaldo's supporters soon proclaimed him the new president of the free Philippines.

The revolutionaries considered aid from the United States free of charge, but in Washington, talk about the independence and freedom of the Philippines caused outrage.

The command of the US Expeditionary Force stated that no guarantees were given to the rebels and Aguinaldo about the future status of the archipelago, and the locals simply misunderstood them.

In August 1898, American troops and rebels finally managed to occupy the capital, but relations between them soon became tense.

Aguinaldo demanded that the Allies formally establish joint American-Filipino control over the city, but was refused.

The Americans issued an ultimatum to the rebels, demanding that they leave Manila completely.

In the fall, the Filipinos held elections and began to form their own governments.

However, the United States has actually established its own administration in the Philippines, headed by a military governor.

In December 1898, the United States and Spain signed a peace treaty under which the kingdom ceded to Washington its rights to the Philippine archipelago for $20 million.

Soon, US President McKinley signed the so-called Benevolent Assimilation Proclamation, which officially established American sovereignty over the Philippines and introduced military administration on the islands.

Governor-General Elwell Otis gave Philippine leader Emilio Aguinaldo a version of the document, in which the provisions that meant the country's actual loss of independence were omitted.

However, the full text of the proclamation, from which it followed that the United States would govern the country, soon became available to the public, which led to a further deterioration in relations between the local population and the Americans.

In early 1899, the United States declared sovereignty over the Philippines.

In February 1899, one of the American soldiers shot and killed two Filipino soldiers who disobeyed his orders.

After this incident, fighting began between the armies of the Philippines and the United States.

Losses of US forces began to grow, which forced Washington to increase its military presence on the islands of the archipelago.

Expeditionary forces began to carry out punitive raids and acts of intimidation against the local population, including public executions and torture.

It is worth noting that in 1902, US Secretary of War Ruth, in an address to American soldiers and officers on behalf of the president, emphasized that in pacifying the Filipinos they were helped by the methods by which the American army defeated the Indian tribes at home.

“Based on the lessons learned from the Indian Wars, they (the armed forces in the Philippines. -

) relentlessly pursued partisan detachments to their hideouts in the mountains and jungle and smashed them.

Their actions put an end to a massive system of intimidation and covert assassination by which indigenous civilians were prevented from truly taking part in the government of the country under the auspices of the United States, ”Root noted.

To fight the rebels and Filipino civilians, American troops used not only methods, but also weapons that had previously helped them in the genocide of the Indians.

Thus, the US military in the Philippines again had to be armed with old "cowboy" 45-caliber revolvers, as the new standard army weapons with lighter bullets proved to be ineffective in the jungle and guerrilla attacks of local militias.

American political scientist Dmitry Drobnitsky, in an interview with RT, noted that the United States was essentially waging a colonial war against the Philippines, while denying it.

“The end of the 19th century was a time when states could afford this, and the Americans always acted straightforwardly and presumptuously, regardless of either the problems of the indigenous population of their continent or other territories that they conquered,” the political scientist noted.

End of the war

In early 1901, US forces managed to capture rebel leader Emilio Aguinaldo and force him to recognize the authority of the United States.

However, despite this, the Filipinos continued to resist.

In September 1901, in response to American oppression, the inhabitants of Samar Island rebelled, killed 48 US Army soldiers and seized their arsenal.

In response, General Jacob Smith ordered the Marines to attack the island and take no prisoners.

The exact number of victims of this act of intimidation has not been established, however, according to some historians, it can be up to several thousand people.

In the spring of 1902, the rebel command surrendered to American troops.

A few months later, the war was declared over, but the fighting with individual detachments of the rebels continued until 1913.

The war in the Philippines cost the US government an unprecedented amount of $ 600 million at that time. The combat losses of the Americans amounted to 4.3 thousand military personnel.

In turn, local militias in battles with the US army lost about 20 thousand people.

Only in 1935 the Philippines received the status of autonomy within the United States, and in 1946 finally gained independence.

The war with Spain and its former colonies was the result of changes in US foreign policy that took place at the turn of the 19th and 20th centuries, Yury Rogulev, director of the Franklin Roosevelt Foundation for the Study of the United States at Moscow State University, said in an interview with RT.

“The United States from the beginning of its existence until recently did not recognize colonial possessions and condemned other world powers for having such possessions.

At the end of the 19th century, the United States had already mastered the territory of its mainland and began to expand beyond its borders.

The Spanish-American War became one of the manifestations of this new, imperialist policy," the expert emphasized.

At the same time, both then and now, official American history claims that the territories seized from the Spaniards were not colonies, Yuri Rogulev added.

“The United States invented a special regime for them: they were not considered colonies, but these were territories that were under the control and administration of the United States.

It was such a peculiar quasi-colonial order and regime.

At the same time, Washington did not officially consider the Philippines to be its colony, ”the source explained to RT.

The war with Spain and the Philippines largely influenced the formation of further US foreign policy, and in particular, the so-called "big stick" concept.

“American expansion at the end of the 19th century was accompanied not only by territorial expansion, but also by the industrial revolution and powerful industrialization.

Big capital arose, which became cramped even within the vast borders of the United States, and began to overflow beyond its borders.

It was both commercial, economic and political expansion.

Then this concept of the “big stick” arose, which involves negotiating from a position of strength, ”explained the interlocutor of RT.

Despite the fact that the positions of politicians who adhered to isolationism were still strong in the United States, Washington's future course for expansion far beyond the borders of its country was already predetermined, Yuri Rogulev concluded.