The Passage of Matheu, the redoubt that saw the birth of the 'terraceo' in Madrid

Between Calle Espoz y Mina and Calle de la Victoria, just a few steps from Puerta del Sol, a discreet passage safeguards the name and history of Manuel Matheu. It was this... 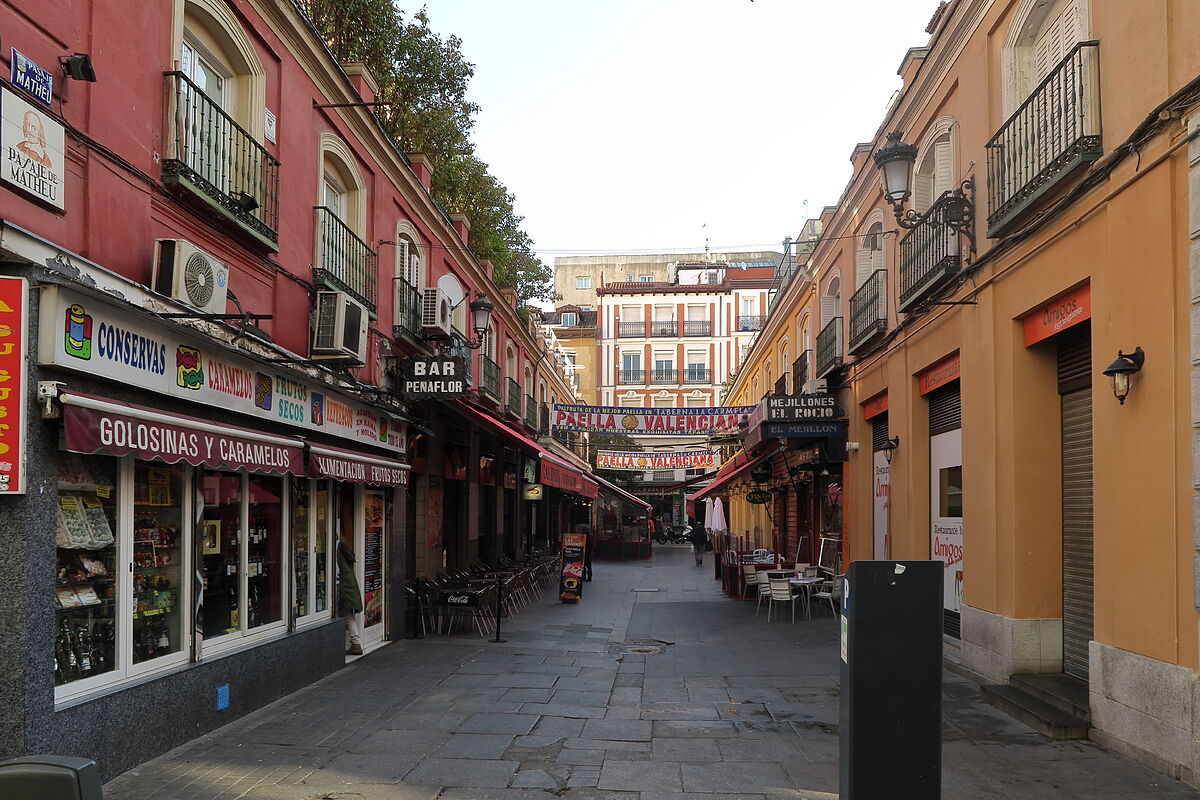 This Madrilenian was a wealthy merchant who, back in the 19th century, gained some fame for his real estate operations in the capital.

One of them, carried out after the purchase of the plots previously occupied by the Convent of Our Lady of Victories, was the one that led him to design a boulevard in the purest Parisian style, which today bears his last name.

The newspaper archives say that, in the description made by the politician Pascual Madoz e Ibáñez of said passage, the work of the architect Antonio Herrera de la Calle, it was defined as

one of the most sumptuous in Europe

Usually arranged inside a block of flats, their structure used to be dominated by transverse commercial galleries, whose function was to unite the two connecting avenues.

In other descriptions of this place that are still preserved today, its appearance is said to have been "dominated by a gallery or central street covered by an armor of iron and glass".

It is also detailed that its entrances were made up of protruding bodies topped with sculptures by Francisco Pérez that "personified commerce and luxury".

From those times remains the memory and some other curiosity, such as the one that popularized this discreet passage around 1870. It was in that year when two French citizens,

of opposite ideological positions

, decided to open two cafes here a few meters away.

While the owner of the Café de France had the reputation of being a revolutionary who had fled Paris after the suppression of the Commune in the year 71, the chronicles of the one in Paris say that he was a Gaul with a monarchist and conservative ideology.

Both cafes were "frontiers" and in them they ate "exquisitely for a price that now would seem unlikely", as Pedro de Répide recorded in his book

The streets of Madrid

meeting places of the French colony in Madrid

, and they distinguished themselves by being the one in Paris the favorite of conservatives and monarchists, and by republicans and people with advanced ideas, the one in France, founded by the revolutionary M. Doublé, who took an active part in the events of the 'Commune', determined enemy of Thiers, from whose triumph he came to take refuge".

In that Madrid full of contrasts, the progressive proliferation of cafes with terraces was quite an event.

Until then, with the permission of the water carriers who shouted barley and anise water in the street, their greatest resemblance was found in certain establishments that requested permission to open

and, in them, delimit a space for the service outdoor.

Répide tells how the cafés in France and Paris were precisely

the first ones that, following French custom, had a terrace in the capital

, "that is, with an extension of the establishment on the public road, a practice that did not bother there because the a space well arranged for it, and which has now become an intolerable abuse in Madrid during the summer months, finding it impossible for passers-by to pass through the sidewalks of the streets and gardens of the squares, occupied by the nightstands and seats multiplied to the absurd".

Even more resounding were some opinions expressed about

, another of the pioneers in setting up its own gazebo, on the corner of Alcalá and Calle de la Virgen de los Peligros.

Despite the fact that, at the time of its inauguration, in 1870, it was described by the press as one of the most elegant and luxurious in Madrid, the critics turned very different when they launched their own terrace, almost a decade later.

If some media outlets dismissed the idea as "provincial", others, such as the

They also did not hide their opinion: "On the sidewalk of the Café de Fornos you will have seen tables and chairs. As soon as half a dozen fools agreed to have coffee in the middle of the street, it would be essential that the good people go out with a shotgun."