Russian "Jason": what is unique about the newest deep-sea vehicle of project 03660

On the order of Gazprom, a manned underwater vehicle (OPA) of project 03660 Yason, which has no analogues in Russia, was laid down in Severodvinsk. The product is a mini-submarine capable of performing a wide range of work at depths of up to 2250 m. In particular, the device is designed to survey underwater gas transmission infrastructure, study the seabed, geological exploration, protect minerals and install various structures. Now this functionality is assigned to divers and remotely controlled uninhabited complexes. According to experts, the construction of the newest submarine is designed to increase the efficiency of servicing offshore gas pipelines and performing various research tasks at great depths. 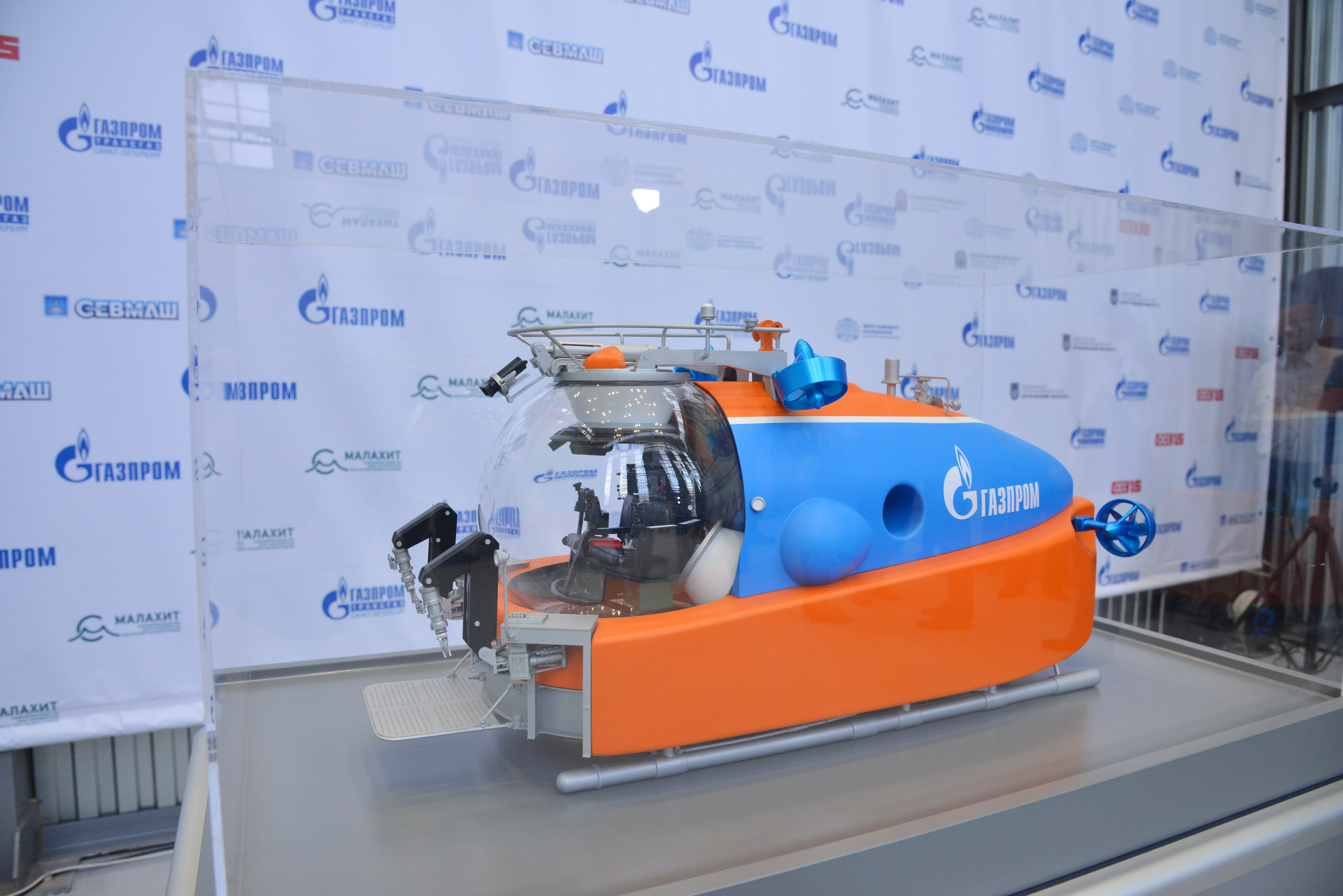 On Sunday, June 26, in Severodvinsk, at the Sevmash Production Association (Northern Machine-Building Enterprise), the laying of the first manned underwater vehicle of project 03660 Yason took place.

This was reported by the press service of the plant.

“We are starting to build a device with unique tactical and technical characteristics.

There were no analogues in civil shipbuilding,” Mikhail Budnichenko, general director of Sevmash, said at the laying ceremony of the apparatus of project 03660.

The submarine was ordered by Gazprom Transgaz St. Petersburg LLC, the lead developer was the Malakhit Marine Engineering Bureau located in the northern capital, and the scientific unit of PJSC Gazprom was the curator.

The submarine is designed to perform work related to the operation of offshore gas pipelines.

Previously, devices of this kind were not built in Russia.

According to the United Shipbuilding Corporation (USC), the submarine can be operated in fresh and sea water in unlimited navigation areas.

The use of OPA will increase the reliability and safety of the gas transportation process.

"In a wide range of depths"

In addition to Malachite, the Krylov State Research Center, the Central Research Institute of Structural Materials Prometheus, the National Research Center Kurchatov Institute and the ANO Center for Underwater Research of the Russian Geographical Society (CPI RGS) participated in the development of the OPA project 03660 Jason.

According to USC, potential consumers of services and works using the submarine laid down at Sevmash can be Gazprom structures and organizations that operate offshore gas pipelines, carry out geological exploration, design, survey and installation work under water.

The customer’s website states that the OPA will be required for seabed surveys, as well as “works in a wide range of depths, including repair and restoration and transport operations, scientific surveys and emergency rescue activities.”

Also in the materials of the company it is said that the OPA is necessary for the safe operation of high-pressure gas pipelines.

In particular, the submarine must assess the current technical condition of the underwater gas transmission infrastructure and “identify factors” that may affect its performance.

As previously stated by the customer, there was no OPA in the world that could fully meet the needs of Gazprom structures in the field of operation of “existing and prospective sections of sea routes, offshore structures, etc.”

At present, Gazprom Transgaz St. Petersburg's area of ​​responsibility includes an extensive infrastructure, including gas pipelines with a length of more than 12,000 km, 197 gas pumping units, and 252 gas distribution stations.

In 2019, the Delovoy Peterburg newspaper published an article dedicated to the innovative activities of Gazprom transgaz Saint Petersburg LLC in the field of ensuring the safety of blue fuel pumping.

It was reported that the company strives to carry out the entire range of work on the diagnostics and inspections of hydraulic structures, however, its technical capabilities for studying underwater gas pipelines are limited.

The material also said that offshore work can be carried out with the help of divers, but their diving depth is limited to 100 m, besides, swimmers cannot always descend into the water due to weather conditions.

In general, human manual labor under water is much less productive in comparison with underwater machines.

Special requirements are also imposed on the vessel on which the divers are located.

In particular, for the purpose of medical support for swimmers, the ship must be equipped with a pressure chamber without fail.

It is also possible to survey objects of the underwater gas transmission infrastructure with the help of remote-controlled uninhabited underwater vehicles (ROV).

They receive control signals and power supply from the ship's board through a cable-cable.

Drones transmit sensor readings and video signals back through it.

The limited operation of ROVs is associated with the length and weight of the cable, which can exceed 10 tons, as well as with adverse weather conditions.

The main alternative to remote-controlled uninhabited underwater vehicles are precisely the ROV, that is, small manned submarines capable of operating at depths of more than 2 thousand meters.

According to Georgy Fokin, the manned underwater vehicle is, in fact, a mini-submarine, "which allows for a long time to carry out work at a wide range of depths."

As noted in the article, the UPA will be able to conduct environmental monitoring, rescue operations, survey and protect offshore mining sites.

Such functionality is relevant for further work on the development of the Arctic, the company believes.

In an interview with RT, energy security expert Boris Martsinkevich suggested that the project 03660 apparatus would be used to explore and survey new offshore fields in the Novaya Zemlya region, which are located at depths of about 1.5 thousand meters.

“Of course, the OPA will be used by Gazprom in the Arctic.

In the future, such a device may be of interest to other companies in the fuel and energy complex,” predicts Martsinkevich.

There is little information about the technical characteristics of the submarine of project 03660 "Jason" in open sources.

However, it is known that the displacement of the OPA will be about 15 tons. It will be able to dive to depths of up to 2250 m.

According to Sevmash, the device will receive a durable spherical body and will be equipped with "submersible equipment, a set of attachments, a hydraulic manipulator complex, unique in its characteristics."

According to Gazprom, the transparent cabin of the project 03660 submarine will have a field of view of about 270 degrees.

This will significantly improve the visual control of the situation and the process of surveying underwater communications.

The crew will consist of two people - the operator of the apparatus and a specialized specialist (operator of auxiliary systems).

As Georgy Fokin explained, the second place in the transparent cabin can be occupied by a specialist in the field of ecology, geology or diagnostics.

The customer expects the OPA to travel at a speed of three knots (5.5 km/h) and operate non-stop for 12 hours.

During the construction of the apparatus, domestic technologies and equipment should be used in the first place.

“The performance characteristics and functionality laid down in the development of the device allow us to assert that this project will not only bring the Russian Federation to the top of the world ranking of manufacturers of manned underwater vehicles, but will also give a significant impetus to the development of related industries,” Georgy Fokin said earlier. .

According to experts, Malachite's competencies make it possible to create a wide variety of underwater vehicles.

The company's website says that its team has experience in designing ultra-small submarines and autonomous deep-sea vehicles.

In a RT commentary, an analyst with the Oil and Gas Information Agency, Candidate of Technical Sciences Alexander Khurshudov, said that foreign companies have already begun to use mini-submarines.

In his opinion, Gazprom's need for OPA is really great.

They are specially adapted for monitoring the condition of pipelines.

Gazprom needs such equipment, especially since in recent decades more and more offshore pipelines have been laid at depths that are inaccessible to divers and underwater drones,” Khurshudov concluded.