On the first day of the general strike by the Cargo Solidarity, 37% and 8,200 people participated… Logistics disruptions everywhere

Logistics and transportation are disrupted all over the country today, the first day the Cargo Solidarity of the Confederation of Trade Unions went on a general strike. Some cement factories, such as the distribution base in Uiwang, Gyeonggi-do, have stopped shipping cement due to interference from cargo union members, and in the case of Hyundai Steel's Pohang plant, shipments of 9,000 tons per day are stopped. 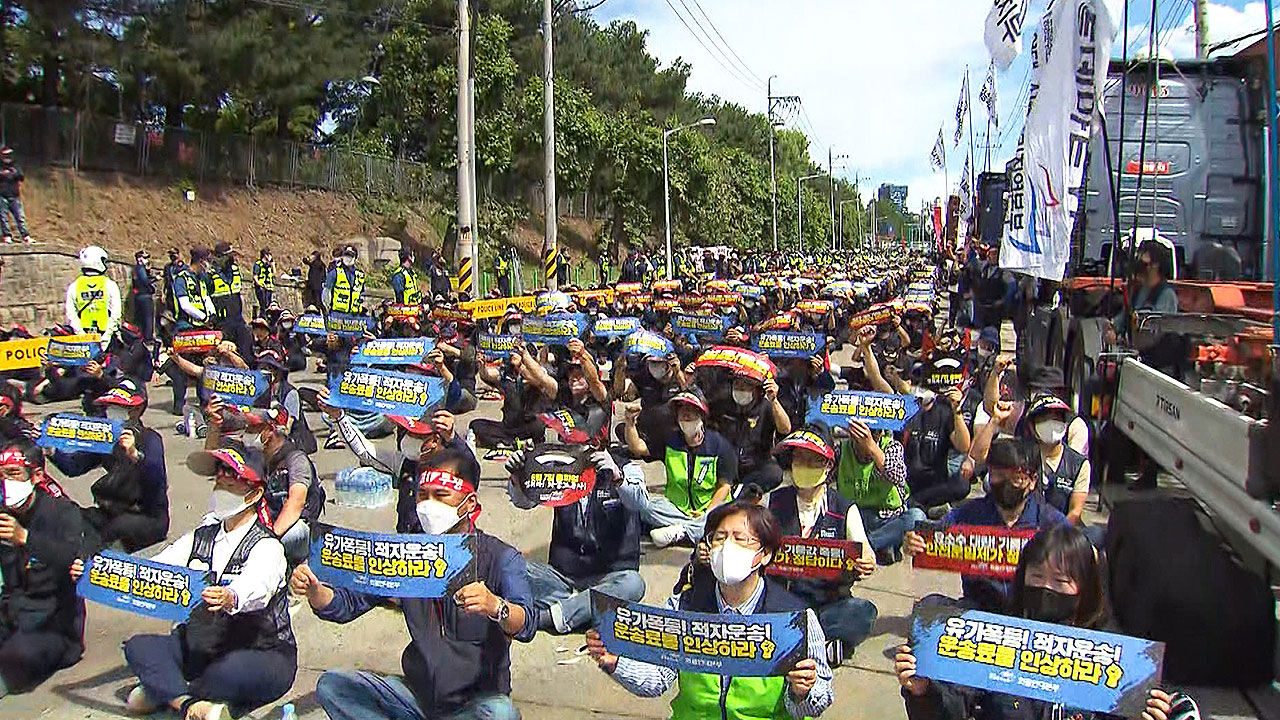 Today (7th), the first day that the Cargo Solidarity of the Confederation of Trade Unions went on a general strike, there are disruptions in logistics and transportation throughout the country.

Some cement factories, such as the distribution base in Uiwang, Gyeonggi-do, have stopped shipping cement due to the interference of members of the Cargo Coalition, and in the case of Hyundai Steel Pohang Plant, the daily volume of 9,000 tons (tons) has been stopped.

However, the Ministry of Land, Infrastructure and Transport is of the view that there is no major setback as of yet.

In this strike, the Cargo Solidarity is demanding the withdrawal of the abolition of the safe fare system, which has been in effect since 2020.

The safety fare system was introduced to prevent overwork, overload, and speeding by guaranteeing fair wages for freight drivers. It is a 'sunset system' and will be abolished at the end of this year.

The Cargo Solidarity held a strike campaign by regional headquarters in 12 regions across the country including Busan, Incheon, and Gyeongnam at 10 am today, followed by a rally in Chungnam and Jeju in the afternoon.

The Ministry of Land, Infrastructure and Transport estimated that 8,200 people, or about 37% of the cargo solidarity union members (22,000), participated in the morning expedition ceremony.

It was found that there were no unusual circumstances such as clashes with police during the assembly process.

The Ministry of Land, Infrastructure and Transport explained, "In preparation for the refusal of collective transport by major shippers and transport companies, a significant number of logistics have been transported in advance, and considering the situation of major logistics hubs such as ports, it is understood that there has been no nationwide logistics damage so far."

Currently, all 12 ports across the country are found to be operating normally.

According to the Ministry of Land, Infrastructure and Transport, the container installation rate by port (the ratio of containers actually stored compared to the container storage capacity of the port) was 68.1%, which is similar to normal times (65.8%).

However, due to the strike of the Cargo Solidarity, damage occurred such as disruptions in transportation at various logistics sites today.

The damage is expected to increase as the situation prolongs.

An official in the cement industry said, "We haven't heard any news of the blockade of other distribution bases, but a decrease in cement shipments will be inevitable due to the strike."

The distribution industry as a whole expects that the strike will not be significantly affected as the proportion of truckers who drive vehicles connecting logistics centers and hypermarket branches is not large. .

The Ministry of Land, Infrastructure and Transport announced today that it has requested the deployment of police forces at major logistics bases to prevent illegal acts such as obstruction of transport and physical collisions by strikers.

The government emphasized that it will guarantee fair assembly of cargo solidarity, but that it will cooperate with the police and take strict measures in accordance with laws and principles for acts such as obstructing the transportation of normally operating vehicles.

He also said that he was always ready to actively engage in dialogue regarding the abolition of the safe fare system and sunset system, which is a requirement of the Cargo Solidarity.

The government has established the Central Transport Countermeasures Headquarters headed by the 2nd Vice Minister of Land, Infrastructure and Transport, Fishery Myeongso, and is implementing emergency transport measures to minimize disruptions in logistics and transport due to strikes.

The Ministry of Land, Infrastructure and Transport, through the regional emergency transportation committee, put official container transport vehicles such as military consignment vehicles into major logistics hubs such as Busan Port and Incheon Port.

An official from the Ministry of Land, Infrastructure and Transport said, "I urge front-line truck drivers to continue to engage in their livelihoods without agreeing to collective actions without a cause."