"Corona is over? We are still on the streets"

Once a week, reporters Park's articles and thoughts that could not be included in the article were released to readers. Thank you to the readers who have loved 'Corona Behind' so far. 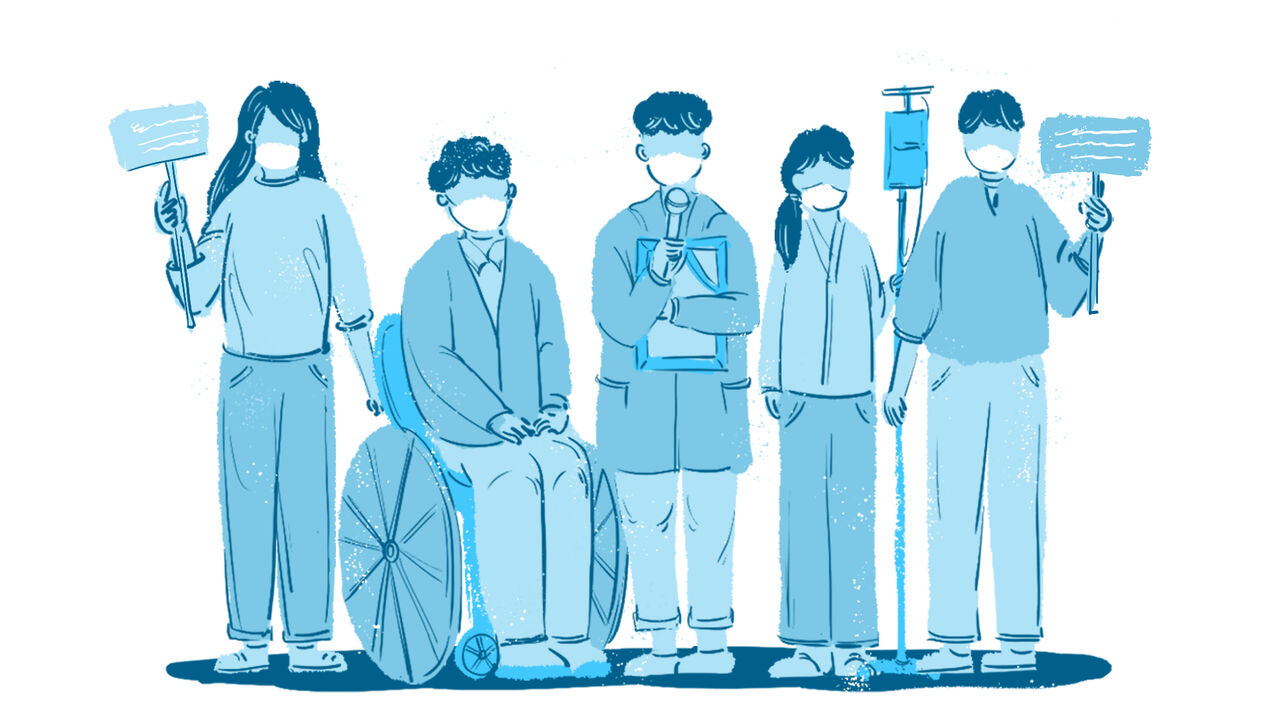 ※ 'Corona Behind' is a report by Park Soo-jin, a reporter from the Life and Culture Department of SBS Press Headquarters, who is running at the forefront of COVID-19 coverage.

Once a week, reporters Park's articles and thoughts that could not be included in the article were released to readers.

Thank you to the readers who have loved 'Corona Behind' so far.

Separation is sudden, with or without notice.

Obituary (訃告) is even more so.

A farewell notice that you and I will no longer live under the same sky.

When such notifications are delivered, it is often a moment of choking, regardless of the depth of the relationship.

"My mother passed away two weeks ago."

In retrospect, there were a few predictions.

In early March, when I first met Minji, in front of the Blue House fountain.

Her mother was infected with Corona and had been treated in the intensive care unit for three months.

The next day, when her mother met her again at her hospital where she was hospitalized, she had already been told several times by her doctor that 'this week is going to be difficult'.

When I parted with her after finishing her interview, I left her with this kind of greeting.

In front of Sejong Center for the Performing Arts in Gwanghwamun.

I was covering another press conference related to the corona damage, and I heard the words of the moderator.

"The family who suffered from the severe corona virus decided to come out and speak in person today, but this morning my mother contacted me saying that she was in critical condition, so I couldn't come."

"Is your mother seriously ill?"

I sent a text message to Minji.

"I came to the hospital this morning because I was asked to come to the end-of-life visit. I'm waiting."

My heart was pounding.

There was nothing she could say other than to cheer up.

"It was the most hellish day of the last three months," she said.

Hell, she believed, would have passed that way.

Two months passed on the 17th.

A text message arrived from Yongsan, where the president's office is located, saying that a group of parents and guardians of patients suffering from severe corona will announce a proposal for the new government.

The sender was Minji.

"How are you? I don't know how your mother is."

The answer I returned to the text message sent with pleasure was my mother's obituary two weeks late.

Not knowing what to comfort her, her head went blank.

In March, through Minji's story, we published an article about the difficulties faced by patients with severe coronavirus and their families.

It was a story about a situation where even after the government-set quarantine period for confirmed patients was lifted, they were still receiving severe treatment for diseases such as pneumonia caused by the corona infection, but they were not receiving government support because the quarantine was lifted.

(▶Related article: [Corona Behind] Living as a family with severe coronavirus) When we

first met, Minji showed me 42 million won on the receipt for medical expenses.

Of the 200 million won in medical expenses charged for three months, Minji was the only one who had to pay.

After that, treatment continued until April 29, when his mother died, and the hospital bill increased.

His actual insurance, up to 50 million won, has already run out, and the task of repaying the medical expenses he borrowed remains where his mother left.

The direct cause of death written on Minji's mother's death certificate was pneumonia.

It is written that the cause of this pneumonia was 'COVID-19 infection'.

However, Minji's mother is not included in the corona death statistics.

Because she died after she was released from quarantine.

There are not a few families of patients suffering from severe corona who are in the same situation as Minji.

We held a press conference in March, and articles were published in various media including SBS.

But nothing has changed yet.

Families of critically ill patients continue to appeal, saying, "Isolation is not a cure." However, neither the previous government nor the current government has given an answer that the family would be pleased with.

In order to find a breakthrough, it is necessary to re-examine the infectious disease prevention method, which is currently required to support medical expenses only during the quarantine period.

The new government's 'Corona 100 Day Roadmap' does not include such content.

There are still tens of thousands of confirmed cases, but it is also true that the COVID-19 epidemic is slowly moving away from people's attention.

This is why even though her mother passed away, Minji still remains on the street.

Minji held a press conference in front of the President's Office in Yongsan, Seoul on the 18th with other critically ill family members.

Some organizations, such as the Society for Acting Nursing for the Realization of the Right to Health, and the Humanitarian Doctors' Council, contributed their support.

They also raised concerns that the problem could worsen if the government's support for the confirmed person itself ceases due to the 'removal of the quarantine obligation' currently being promoted by the quarantine authorities.

Families of critically ill victims also said that they have a lot to say about the 'high-risk fast track' that the government recently introduced.

In the case of high-risk patients, the government is aiming to implement it in June as a measure to enable diagnosis, prescription, and treatment within one day.

The family resents the government's belated response, saying, "This is a measure that came out after more than 20,000 people died in over two years."

"My mother has passed away, and I have to pay the medical bills, but the burden won't increase any more...But why are you still out on the streets to hold a press conference?"

“While organizing my mother’s belongings, I thought that the initial response to home treatment was wrong. That was the golden time, and I missed it. Concentrating on 'infectious disease control' centered on isolation, the government missed the proper treatment of the sick. Infectious diseases will come again, and this situation cannot be repeated again. There is still a realistic task of solving the difficulties of the patient's family, who still have to pay tens of millions of won for treatment. Mother passed away, but help to change this situation. I thought it should be."

"I'm going to Yangsan this Saturday."

This is a notice announcing the weekend meeting place.

The person who is contacted every week is Lee Seung-hee, secretary general of the Corona 19 Vaccine Victims and Families Association.

He is also the husband of a nursing assistant who developed symptoms of quadriplegia after receiving the AstraZeneca vaccine in April 2021.

At first, all there was a candlelight vigil held in Seoul every Saturday, and after that, a tent incense burner was installed in Gwanghwamun, and the scope of rallies and demonstrations was also nationwide. widened to

Over the weekend two weeks ago, on Saturday, we went to a memorial service for vaccine victims in Seoul, and on Sunday to Yangsan, where former President Moon Jae-in resides.

Life on the streets of the country can never be easy.

After vaccination, before they were harmed by an adverse reaction, their lives were very ordinary, enjoying their leisure time at work on weekdays and with their families on weekends.

The winter wind that blew when we first made the tent incense burner at Cheonggye Plaza in Gwanghwamun has disappeared, and now the sweltering heat of midsummer is coming.

No one has ever told them to go out on the street.

But the family continues the endless struggle.

What is that mind?

It could be guessed from the writings of a wife who lost her husband after vaccination, transmitted through Director Seung-hee Lee.

“There is hope that I can come out after being healed, so I’m envious. There is no hell for those who left without a word overnight. I haven't slept comfortably in my room after work. I sleep in the living room every day. If I sleep comfortably, I feel more sorry and guilty because I haven't done anything for you."

The Vaccine Victims and Families Council had high expectations for the launch of a new government.

The previous government has been passively recognizing the scope of acknowledgment of causality for side effects of vaccines and has demanded that the new government acknowledge the causal relationship more broadly and actively compensate for damages, arguing that it was difficult to receive compensation for damages.

Specifically, ▲settlement after payment of vaccine side effects treatment costs ▲designation of a hospital exclusively for treatment of side effects of vaccines ▲enactment of a special law on vaccine victims ▲transparent disclosure of the details of the review of adverse reaction damage investigations.

The 'National Responsibility System for the Recovery of Damages from Side Effects of Vaccines' was included in the representative pledge of the Yoon Seok-yeol administration during the presidential election.

But nothing has changed yet.

The new government promised to simplify the review process, expand the opportunity for objections, and set up a damage compensation center within 100 days of its inauguration, but nothing materialized.

On the 26th, the Korea Centers for Disease Control and Prevention (KCDC) gave only an ambiguous answer to a related inquiry, saying, "We are working to shorten the review process, and we are expanding the opportunity to appeal.

There are still tens of thousands of confirmed cases every day, but it is true that the fear and interest as in the past has decreased.

The two-year 'abnormal system' is being normalized one by one, and this is partly because of getting used to the daily life with Corona.

The importance of the corona news in the news is also decreasing.

It was only a few months ago that the daily top news coverage of the corona news was work, but these days, it is true that there are many times when a single report is replaced by a single report.

<Corona Behind>, which has been serialized weekly since January, ends with this episode.

We have shared 20 stories with our readers for about 5 months.

Last but not least, I wanted to capture once again the voices of those who remain on the streets and work hard to solve unsolved problems.

If we ignore the remaining tasks and pass by, I think that the same damage may be repeated again.

Corona is not over yet, and we do not know when another kind of infectious disease will shake our lives.

We would like to thank the readers who have sent various tips and affection to <Corona Behind> in the meantime.