President Yoon and his wife watch an open concert in the dark... "The Blue House, the people's thing"

It is a real-time e-news that looks at the news that has become a hot topic on the Internet overnight. I have seen many articles that President Yoon Seok-yeol and his wife Kim Kun-hee watched a public concert held to coincide with the opening of the Blue House with citizens. 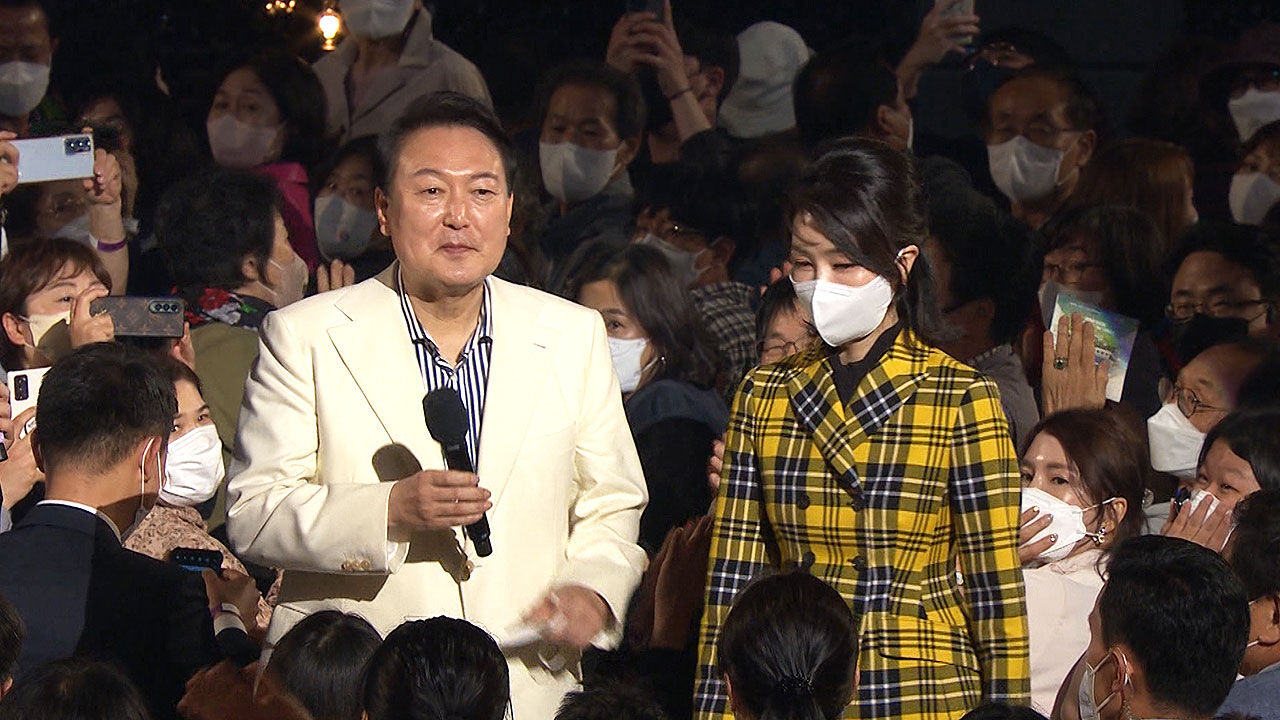 I have seen many articles that President Yoon Seok-yeol and his wife Kim Kun-hee watched a public concert held to coincide with the opening of the Blue House with citizens.

[President Yoon Seok-yeol: (This space at the Blue House) is a very nice park and cultural property.

Above all, it belongs to the people.]

President Yoon and his wife, who were watching the performance mixed with the citizens, stood up for a while at the end of the program and said hello.

Unlike the previous day's summit, he was dressed comfortably. President Yoon was wearing a blue striped shirt and white jacket, and Mrs. Kim also had her hair half tied back instead of curled up.

Prior to the official dinner at the National Museum of Korea, President Joe Biden's words of encouragement to President Yoon and his wife also became a hot topic.

"There is a saying in America, but President Yoon and I are men who 'married up'," he said with a smile.

An official from the presidential office explained, "It's an expression of normal men lowering themselves and raising their wives."

I've read a lot of articles about the controversy surrounding wine, which was served as a banquet at the welcome dinner for President Biden.

Park Young-hoon, chairman of the National University Student Council of the Democratic Party of Korea, said on SNS yesterday, "Wine 'baso' was on the dinner table at the Korea-US summit. It’s a place we work together.”

"President Biden sent a letter to former President Chun Doo-hwan concerned about the oppression of opposition leaders, including former President Kim Dae-jung, during his time as a U.S. senator in the 1980s," said Chairman Park. "I sent a letter of warning to the president, and he drank wine made by the dictator's son at the Korea-US summit."

This wine was also selected as a dinner drink at the G20 summit in 2010. Earlier, the presidential office announced that it had selected alcoholic beverages that could feel the characteristics of both countries as toast wine and banquet wine for the reason for the wine selection.

I saw a lot of articles about naked protests taking place on the red carpet of the Cannes International Film Festival.

On the 20th local time, as film director George Miller and actress Tilda Swinton and others were walking down the Cannes red carpet, a woman took off her dress and broke into her.

The woman's upper body was painted blue and yellow, symbolizing the Ukrainian flag, and it was written 'Do not rape us'.

Her lower body was painted red, which symbolizes her blood.

She seems to be a symbol of the reality faced by Ukrainian women.

The protest came to an end when a security guard wrapped the woman in a jacket and dragged her out, and a French women's group explained on social media that 'activists in France condemned the sexual torture suffered by Ukrainian women in the war'.

After Russia's invasion of Ukraine, a series of reports of sexual assaults by the Russian military against Ukrainian women have sparked criticism.