Like a phoenix reborn from its ashes. Literally. Because Dani Ochoa (no longer with his gastronomic partner) and Montia (a benchmark in Madrid for natural cuisine, natural wines... 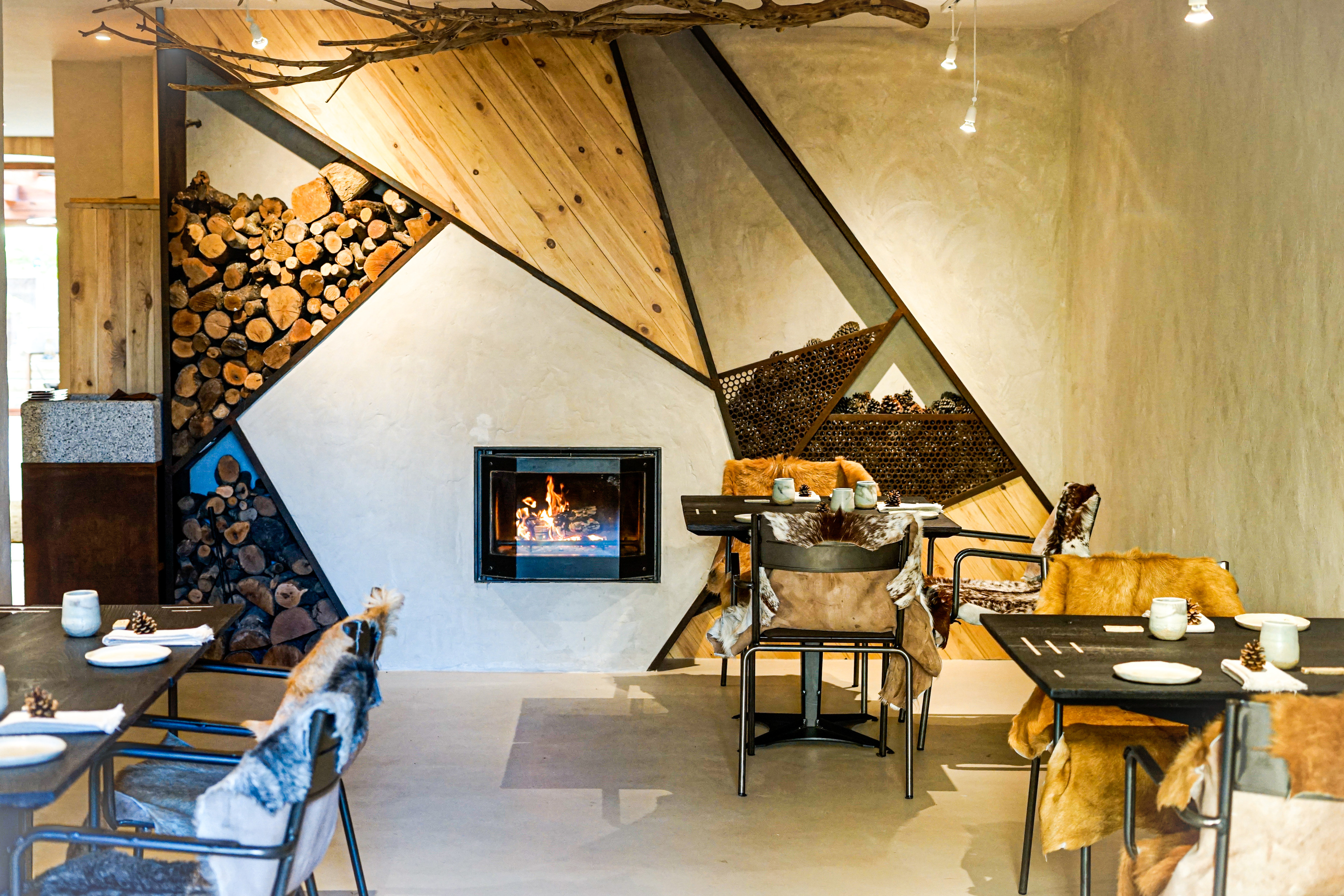 Montia (a benchmark in Madrid for natural cuisine, natural wines and km 0)

have resurfaced from them

A year ago (May 8, 2021), when the state of alarm was ending and the Madrid hotel industry began to receive foreign customers, the San Lorenzo de El Escorial dining room -with

The fire disrupted the plans that Dani and Luis Moreno, his partner, had: convert

the Montia headquarters into a second, more informal brand, and open another Montia in a larger space,

work on which had already begun.

The room has a Nordic aesthetic: wood, fur on the leather chairs...

"Just the day we signed the loan, it burned down. I don't know if it was fate... Perhaps the place that had given us so much did

be a second brand and

its story there," recalls Dani Ochoa today, with a new Montia -opened in January- already

at full speed, a few meters from the old

, the response from the public could not have been better.

"It was opening and starting to fill up and that, after eight months stopped, is appreciated and gives a lot of oxygen.

We are very busy on weekends," Ochoa proudly acknowledges.

But getting here hasn't been an easy ride, and Dani is more than used to

tramping through the mountains of the Sierra Norte in Madrid

"For a while we wanted to keep both projects, but, in the end, it was not possible. My partner left and

I was left alone

The kitchen, where you can see the team working, is the backbone of the space.

"It's been a tough year.

I've had to look for financing under the rocks

to finish the project."

And, between stones and ashes, the resurgence has arrived, because Dani likes the march.

My comfort zone is situations that are a bit difficult

. My friends and the people who have worked with me know that I am happier when I look at the hill and not the flat road."

He continues: "In Montia

there was a time when it was too easy

, everything was perfect, and we stopped valuing the good reviews, the waiting list of 100 people, the three full months... We saw it as normal. But what has The

past has made me appreciate that

all this is the result of 10 years of hard work, of doing things well"...

And a bit of luck too: "In life you have to have certain moments when luck smiles at you.

I don't know if it is a cosmic balance

, in the end and despite everything with the Montias we have had luck on our side. It has always gone very well for us

the months of "fear

, because I didn't have a mattress. But once the restaurant is open and rolling,

I see everything very clearly and the future is very beautiful."

Because "we are more Montia than ever. Not a single wall of the old premises has remained. What has been built here is much more personal, even being alone in the project has made it even more so.

This is one hundred percent Dani. Dani and the rest of the team;

the boys, the truth, have been with me from a pinion".

They have painted, they have loaded sacks of earth... "We have covered each other

, and that is the milk. What I am most proud of is my team," acknowledges the chef whose "

and discovers that he likes it, that it's not bad and that he begins to be valued by classmates and teachers", he says by way of biographical review (which we complete: trained in Mugaritz, among other restaurants; Revelation Chef in Madrid Fusión 2014, together with to Luis Moreno, and Michelin

So far the typicity, because

Dani has his own style: risky chef, non-conformist, champion of local products and sustainability,

committed to the land long before these concepts became fashionable.

"Working with producers here on a daily basis is a piece of cake; we have internalized it and it comes naturally to us."

Thus, the current Montia is "

in a certain sense a more radical Km 0.

The construction company; the raw materials, the furniture, the crockery, everything

from people from the area. Even

part of the restaurant has been made by the boys and I with our hands".

It has two Nordic-style dining rooms (wood, fur on the leather chairs, fireplace) and,

as the backbone, the open kitchen that you have to go through to get from one place to another.

In addition, it houses a little gem,

an indoor stair garden with sprouts and aromatic herbs.

"It is small for planting vegetables, unless they are chili-type. Sprouts, fast-growing leafy plants, such as nasturtiums or escaroles, are working well for us... And

we have already harvested celery and parsnip...

It is the first year and we are in the 'trial and error' phase", he details.

Here each day and each dish is unique,

like the Montia boys (eight in the kitchen, who since memory remembers present the dishes to the diner, and four in the dining room), "

gatherers and farmers" who go out to the fields and mountains in search for herbs, flowers, mushrooms..

With what they bring, the stations and suppliers in the area ("we have begun to work with

suckling lamb of the churra breed raised in the town

") make "a pure, natural and wild cuisine", with recipes such as sweetbread fritters and sea ​​urchin;

hare terrine, its consommé and herbs from the garden;

Dani's goal has always been for us to eat the sierra.

Terrine of hare a la royale, fennel and herbs from the garden.

"Our line is very clear, whether you like it or not is another thing: a kitchen with natural ingredients. Very few stories come into play here in the form of gelling agents or powders."

This closeness to nature is reflected in

: long (95 euros, 45 euros for wine pairing) and XL, with two more passes that include

"Now we give two versions, a more contemporary one with fried and crunchy tripe and the traditional one, which we can't take away or feel like."

Dani has created a universe to suit her.

"From the moment you enter until you leave, everything has to do with Montia, from the glass to the bathrooms"... Or the

natural wines, a hallmark of the house just like the wood or the leather on the chairs.

, all from small producers and friends. We keep them in the cellar, arranged according to the dishes. I like to change the pairings and, every day, we try the wine with the dish because, for example, the point of salt in a recipe can change the harmony".

They only offer natural wines.

If they have even made their own, fresh, young, fruity.

"They brought me grapes and we stomped on them together, old and new guys from Montia, members of the staff... even my son. It was a super nice day and

I think all that good energy was transmitted to the wine, which, surprisingly, has been very fine

They call it Tinaja, because they rest in them, and they have produced three: a godello and airén white;

a red with bobal from Valencia and malvar from Madrid and a semi-sweet overripe Grenache;

"We have also left some demijohns

in the sun and serena

(outdoors), to see what comes out."

The second room, overlooking the orchard.

Speaking of waiting, what do you expect from this stage? During this year there have been times when I just hoped to get out of the hole and get my team out of there.

Now my goal is to enjoy cooking, see how it evolves and do things better every day.

In this place we have much more capacity to advance;

in the old one we had reached the ceiling, and here we are starting. But in this

things have fallen by the wayside, for example, the Michelin star. It was expected.

They called me and I explained that we had a joint in ruins and another that had just burned down.

It was impossible for them to visit us before closing the guide, at that time, Montia did not

What's more, the reform was delayed and we finished it in December. Will you recover it this year? I don't know, really.

For those of us who are far from the capital, yes, it can be a support, but I believe more in day to day, in constant work and in improving than in waiting for someone, a critic or a guide, to appear and save me. the ass

The customer is day to day. Is this the restaurant you wanted? Yes, for this moment in my life it is perfect.

Another thing is that you have always had in mind to open another place in the countryside, with a garden and animals. Have you ever considered taking Montia away from Madrid? -No, but I wouldn't rule out the idea either.

It is clear to me that I would never take it to a city, but I would not rule it out in a mountain, mountain, countryside or river environment.

The new Montia offers two versions of its famous corns, here the contemporary one.

Habitats to which one more element should be added: music.

Radio 3 to work and a playlist with songs pulling folk for the service. There have been services that did not

and, after changing the music, everything began to flow."