"Bridgehead for further development": how the founding of Jamestown marked the beginning of the British colonization of North America

On May 14, 1607, more than a hundred settlers from Great Britain reached the shores of North America. There they founded the settlement of Jamestown. This event was the first successful attempt by the British to gain a foothold in the New World. From Jamestown began the creation of the colony of Virginia, later transformed into one of the first US states. According to historians, all this laid the foundation for the British colonization of North America, which later covered most of the mainland. The process was accompanied by mass expulsion and destruction of the indigenous population of the continent - the Indians, experts remind. 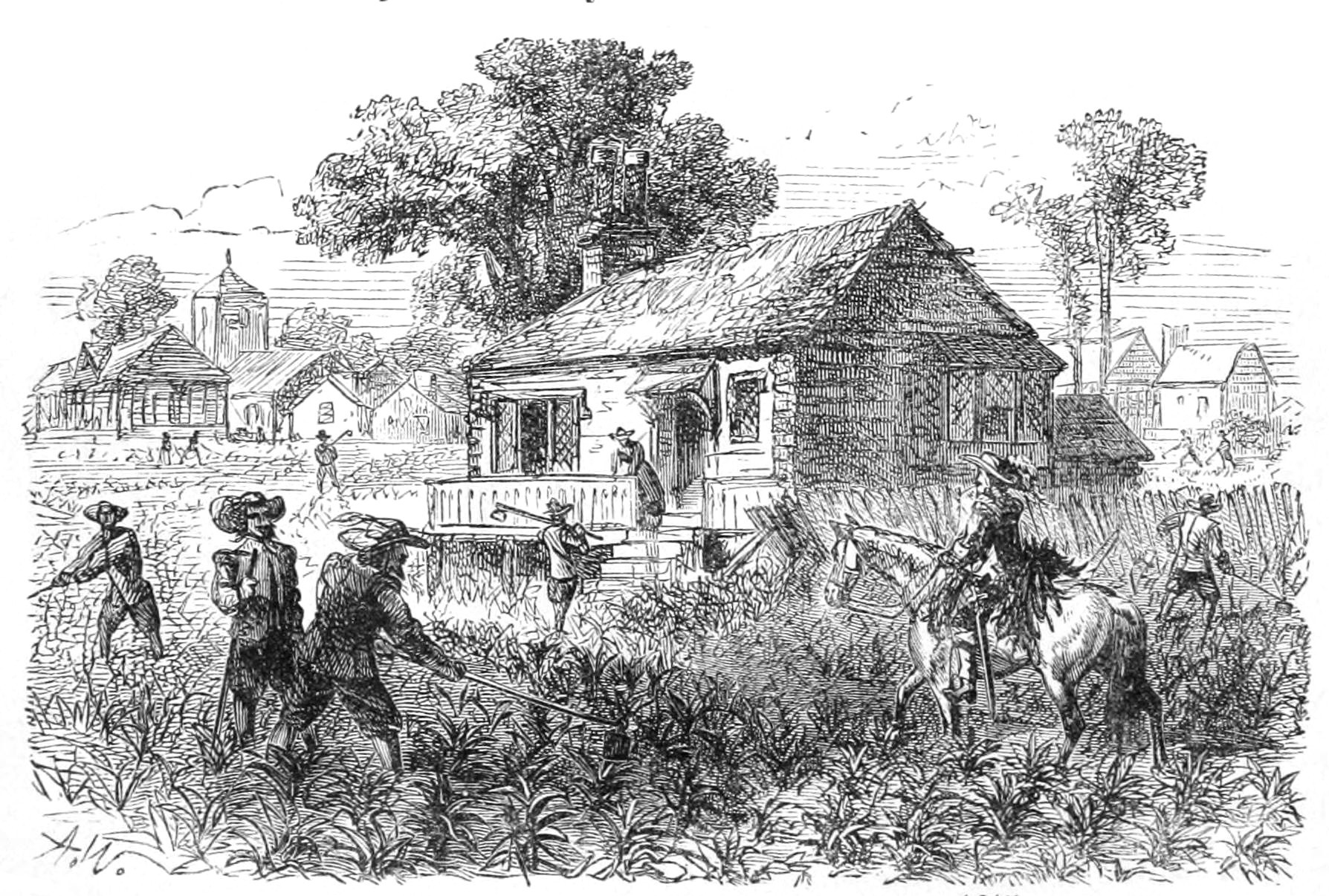 On May 14, 1607, the British ships Susan Constant, Godspit and Discovery reached the coast of North America.

They transported 104 settlers across the ocean, who for various reasons left the UK, deciding to look for a better life in the New World.

The colonists founded the settlement of Jamestown, which later became the center of the Virginia colony.

The founders of Jamestown were not the first British to want to settle in North America.

Their compatriots had already tried to settle in these parts in 1584 and in 1587.

However, the first settlers could not provide themselves with the necessary provisions for survival, and they were evacuated from the New World by the navigator Francis Drake.

The inhabitants of the second colony, known as Roanoke, completely disappeared without a trace, giving rise to a lot of scientific theories and mystical conjectures, according to which several horror films were shot in the 20th century.

After the first failures, the British authorities temporarily abandoned independent projects for the founding of colonies in North America, transferring the corresponding rights to two private companies - London and Plymouth.

In December 1606, the transatlantic expedition of the London Company under the command of Captain Christopher Newport began, culminating in the founding of Jamestown.

The settlers built a wooden fort and began to equip a new place of residence, but soon faced serious difficulties, feeling an acute shortage of food.

At the same time, many of them focused on the search for gold, which in fact was not in this part of the continent.

The position of the colonists was aggravated by the fact that Jamestown was located in a swampy area.

The massive incidence of pneumonia, malaria and dysentery, as well as constant malnutrition, led to the fact that in the first years of the settlement's existence, most of its inhabitants died.

According to archaeologists, the famine in the colony acquired such proportions that even cannibalism was observed.

However, despite all the difficulties, the inhabitants of Jamestown were able to save the settlement.

In 1607, John Smith, a member of the colony's governing council, was captured by the local Indians.

At first they wanted to kill him, but the daughter of the leader Pocahontas stood up for Smith.

This episode formed the basis of the repeatedly filmed romantic story.

Soon after the founding of Jamestown, the London Company, which never found gold in the area of ​​the settlement, gradually began to lose interest in it.

The survival of the colony was in question.

But in 1612, farmer John Rolph crossed local varieties of tobacco with those brought from Bermuda.

Connoisseurs liked the new variety, and besides, it grew well in the vicinity of Jamestown.

“Unlike previous groups of colonists, the residents of Jamestown were still able to find economic support for their resettlement project.

Tobacco has become an important guarantee for the further development of Virginia,” said Alexander Petrov.

For the cultivation of tobacco, the colonists soon needed more extensive territories, and they began to take land from the Indians.

In 1622, the first large-scale armed conflict took place between the Powhatan Indians and British settlers.

The colonists suffered serious losses, but the Native Americans could not drive them out.

In 1699, the capital of Virginia was moved to Williamsburg.

The place of tobacco in the region's economy, according to Petrov, eventually took cotton.

Jamestown gradually fell into disrepair and was abandoned by the inhabitants.

Nevertheless, as historians note, he played a huge role in world history.

“The first settlement was considered as a springboard for the further development of the entire continent.

It became a stronghold for the capture of most of North America.

For some time, the North American colonies became the most important source of strengthening its economic power for Britain, which is poor in natural resources, ”Vladimir Vasiliev, chief researcher at the Institute for the USA and Canada of the Russian Academy of Sciences, said in a conversation with RT.

Conquest of the Continent

In 1620, a new group of settlers set off for North America on the Mayflower, who later became known as the Pilgrims.

It included Protestants who founded the Plymouth colony in the New World.

“Puritan ethics became the basis for the political-capitalist development of the future American civilization,” says Petrov.

While Virginia relied on the agrarian development of the economy and the massive use of the labor of slaves imported from Africa, the inhabitants of Plymouth and other colonies in the northeast of the territory of the modern United States paid more attention to industrial production.

Over time, the British monarchs began to "gift" vast lands on the Atlantic coast of North America to influential aristocrats.

Later, their inhabitants obtained from the central government permission for representative government.

Already in the 17th century, most of the east coast of the modern United States was included in various British possessions.

The attitude of the colonists towards the Indians, according to historians, was initially controversial.

When the settlers managed to negotiate with them peacefully on the acquisition of one or another plot of land, the native inhabitants of America were formally regarded as representatives of independent nations.

But when the Indians refused to sell their land or resented the deceit during the transactions, in the eyes of the British they immediately became "savages" who had no political and property rights.

As a result of a series of wars, the Indian tribes of the east coast of North America were partially destroyed, while the rest were driven deep into the continent.

According to the Americanist historian Alexei Styopkin, in the early years of the colonization of North America, the British tried to avoid open conflicts with the local population, but then the economic benefit became a priority.

“The Indians had the only important resource for European settlers - land.

And in order to take possession of it, the indigenous population began to be driven farther and farther away,” Styopkin says.

To the north of the British possessions, on the territory of modern Canada, France founded its colonies.

But as a result of several armed conflicts that occurred in the 18th century, almost all French colonies were captured by Great Britain.

At the same time, the Indian tribes, which attracted London and Paris to their side, suffered huge losses, fighting for the interests of others.

According to experts, in the 18th century, official London tried to maximize the income from its North American possessions.

The British authorities curtailed the powers of local governments, in parallel imposing new taxes and fees on the colonists.

In 1774, representatives of the North American colonies convened the First Continental Congress, at which they demanded that the British crown lift the previously imposed trade restrictions and stop imposing taxes on the inhabitants of overseas possessions without their consent.

However, official London declared the colonists to be rebels.

The war began, during which the North American colonies declared independence and the creation of their own state - the modern United States.

The territory of Canada remained under the rule of the British crown.

The independence of the United States did not give any preferences to the North American Indians.

In 1823, the US Supreme Court officially enacted the so-called Doctrine of Discovery, which actually existed before.

According to it, the Indian peoples were officially deprived of the status of subjects of international law and any sovereign rights, including the ownership of the land on which they lived.

In implementing the Doctrine, the US authorities expelled Indian peoples from the eastern regions of the United States to the barren lands west of the Mississippi River, who had previously led a sedentary lifestyle there.

In the second half of the 19th century, Washington began to seize territories in the central and western parts of the continent.

According to historians, the Indians were destroyed both with the help of weapons and simply depriving them of their livelihood.

In particular, American authorities and businessmen hired hunters who killed thousands of bison, which had previously served as the main source of food for the Indians of the Great Plains.

Many experts characterize the events of the 17th-19th centuries in North America as genocide.

At the same time, there is no single assessment of the demographic losses of the Indian population during this period.

However, according to some historians, at the time of the arrival of the Europeans, up to 10 million Indians lived on the territory of the modern USA alone.