The door wide open for the first time in 74 years... Blue House, look around like this

The blue-tiled house, which opened after 74 years, covers an area of ​​over 250,000 square meters, and there are nearly 10 major buildings in it. It is said that it would take about an hour and a half to see all of them at an adult's pace. 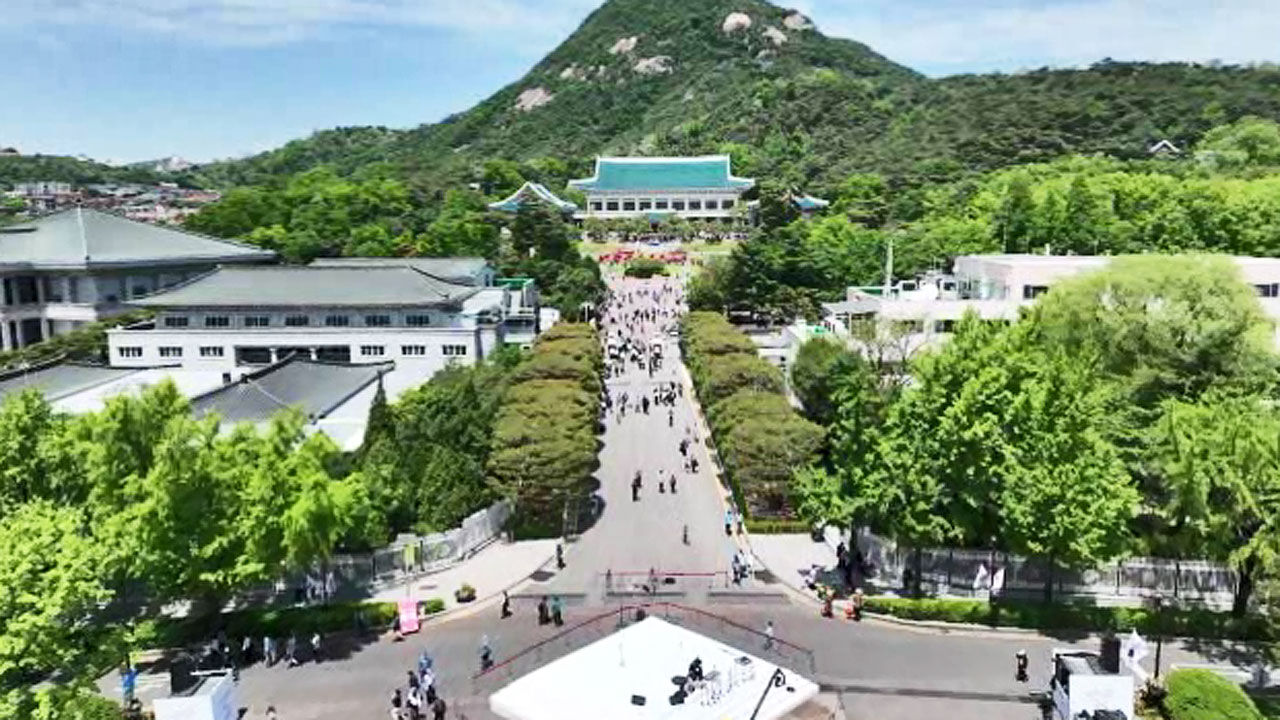 The blue-tiled house, which opened after 74 years, covers an area of ​​over 250,000 square meters, and there are nearly 10 major buildings in it.

It is said that it would take about an hour and a half to see all of them at an adult's pace.

Reporter Lee Joo-sang will tell you where and how to visit.

you enter the main gate, you can see the Blue House main building at the bottom of Mt. Bukak.

This is where the President's Office used to be.

On the west side of Inwangsan Mountain, you can see Yeongbingwan, the official venue for state visits, and Chilgung, where the tablets of concubines who gave birth to kings during the Joseon Dynasty are enshrined behind them.

Several large-scale events were held in the large garden in front of the main building, and today (10th) the Jongmyo Jerye was held.

If you turn right from the main garden in front of the main building and go east, it leads to the presidential residence and Sangchunjae.

From the site of Sugung to the official residence, you have to walk for about 5 minutes along the small uphill, about 200m in a straight line.

Until now, the presidential residence could only be seen from outside the iron gate, but now you can go right in front of it.

The official residence was completed in 1990 during the time of President Roh Tae-woo and has been used as a private space for successive presidents since then.

If you go up the promenade behind the residence, you can see major relics that have not been opened to the public.

The seated stone Buddha statue of the Unified Silla era was moved from Gyeongju by Governor Terauchi during the Japanese colonial period.

Ounjeong, where the first president Syngman Rhee wrote a signboard, is a resting place on the promenade behind the residence.

If you go down from the official residence, to the east is Chimryugak, a traditional house that was built in the late Han Dynasty, and to the west is Sangchunjae, a place for receiving foreign guests.

In front of Sangchunjae is Nokjiwon, the most beautiful place on the grounds of the Blue House.

During the Joseon Dynasty, past exams were also held in this area.

Bansong, a pine tree, a symbol of greenery, is famous for being over 300 years old.

The Chunchugwan, which used to be the press center of the Blue House, is located at the eastern end.

If you enter from the main gate and walk slowly to the Spring and Autumn Museum, you can explore it in about an hour and a half.