Laboratory-manufactured meat, vegan eggs, insects, algae... This is how innovation and sustainability will change our way of eating

As an appetizer, a handful of baked insects. As a main dish, lab-made vegan eggs. For dessert, fruit -for example, a custard apple- that has modified its... 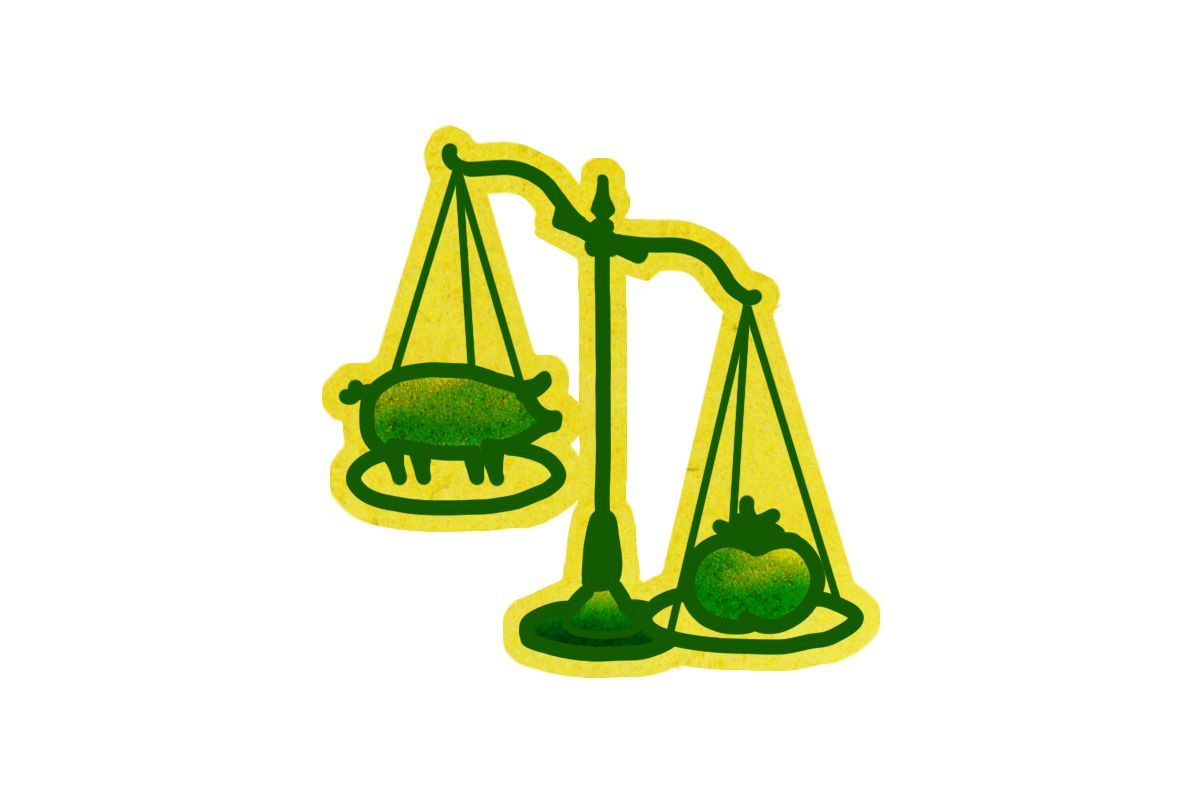 As an appetizer, a handful of

As a main dish,

For dessert, fruit -for example, a cherimoya- that has modified its chromosomal structure to be able to be cultivated with less water and thus face the growing desertification.

This could be the

of any meal in the not so distant future.

Beyond how exotic the previous recipes may sound, the agri-food sector is transforming itself to respond to two of the great problems facing the Earth.

On the one hand, the

increase in the world population

more than 11 billion in the next century.

To feed these 11,000 million mouths, the Food and Agriculture Organization of the United Nations (FAO) considers it necessary for the annual production of cereals to increase to 3,000 million tons and that of meat, to 470 million.

This is stated in his study

However, this is where the second problem arises.

According to another FAO report,

To this must be added that 80% of global deforestation is the result of agricultural expansion, of which most is used to feed animals and not directly to people.

In the Amazon alone, the lung of the world, 70% of its tropical forests have been converted to pasture.

THE DIET OF THE FUTURE

Thus, the gradual abandonment of livestock farming over the next 15 years would suffice to achieve a 68% reduction in CO2 emissions by the year 2100. Therefore,

Achieving it requires doubling the global consumption of fruits, vegetables, nuts, seeds and legumes, while that of foods such as red meat and sugar should be reduced by more than 50%.

A diet that the prestigious scientific journal

This flexitarian diet is based on the

based foods , in which modest amounts of fish, meat and dairy products can optionally be included.

Summarized in a single plate, it would have half full of vegetables and fruits, while the other half would be made up of 85-90% whole grains, such as wheat, rice or corn, proteins of vegetable origin (legumes), as well as fruits dried and seeds.

In the remaining 10%, there would be some meat, some fish, cheese or milk.

, since it makes no sense to consume oranges in July or peaches in January, and

-to reduce emissions associated with transport-.

Favoring this eating pattern over the current one -in Spain alone, each person consumes around 275 grams of meat a day, more than 100 kilos a year- would imply a

and a 58% reduction in land for agricultural use, 52% less energy consumption and a 33% saving in the water footprint.

A challenge that requires "the use of scientific-technological resources to guarantee a sustainable, efficient and sufficient production of food that meets the needs of the population; in such a way that these foods are more abundant, safe, healthy, nutritious and with better flavor and shelf life", explains María Cruz Rey de las Moras, PhD in Molecular Biology and Biotechnology and professor of the Degree in Human Nutrition and Dietetics at the Miguel de Cervantes European University.

"The food of the future will be a

hybrid between the food of our ancestors and new technologies

and it will change what we eat and how we eat it," continues Rey de las Moras.

For his part, Enrique Porta, partner responsible for Consumption and Distribution of KPMG in Spain, points out that "the search for health, sustainability and [environmental, social and animal] welfare will accelerate the growth of

and with a smaller footprint caloric and environmental, it will produce a

better balance between products of animal and vegetable origin

and will incorporate new sources of protein and new origins, such as synthetic".

Thus, a diet based on

, such as meat from muscle cells and vegan eggs derived from legumes, such as peas, soy or chickpeas.

will begin to be applied that will mark a before and after in the way we feed ourselves and will allow, for example, to produce more food with less surface area and water (nanotechnology and biotechnology);

or add aromas to improve food nutritionally, without the consumer appreciating changes in taste, texture or shape (neuroaroma).

In addition, nutrigenomics (part of the science that studies the interaction of food with the genome) and nutricosmetics (a combination of food and personal care to delay aging) will be popularized.

Eit Food is the leading food innovation initiative in Europe.

Reporting to the European Institute of Innovation and Technology (EIT) of the EU, its objective is to find the

start-ups in the agri-food sector and help them grow and open a niche for them in the international market.

"Surely, there is already more science and technology in the food industry than people think. Today, it is assimilated throughout the value chain," says Begoña Pérez, general director of EIT Food for Southern Europe.

"From the way the seeds are planted, the irrigation methods, how weeds are avoided... Even in the way the food is collected from the field. And, of course, in the logistics and distribution and methods to improve labeling and traceability or avoid food waste. Without technology there is no future," he adds.

that have gone through their entrepreneurship programs and have obtained European recognition.

Spain is an international power in food innovation

According to the report

is the fifth with the highest investment in Europe, behind Germany, the United Kingdom, France and the Netherlands.

Moreover, Porta believes that companies that do not join this transformation "run the risk of losing efficiency and/or relevance and seeing their position threatened in the future."

To avoid this, the new Strategic Project for Economic Recovery and Transformation (Perte), approved by the Council of Ministers, will allocate

to improve production processes linked to competitiveness, sustainability and traceability of food production.

The company Biotech Foods stands out, which produces protein with high added value through cellular agriculture.

meat manufactured in a laboratory

, a 100% natural product with 0% fat content that requires 99% less land and 75% less water than current livestock.

Íñigo Charola, CEO of this company of Basque origin, explains how it is made: "It is animal muscle tissue that, instead of developing in the body of the animal itself, grows naturally through the proliferation of muscle cells, in equal conditions in terms of temperature, oxygen and nutrient availability.

This cultured meat can then be shaped into any desired shape, such as burgers or sausages.

Charola considers that "the future of the agri-food sector lies in the development of these new protein sources that can complement traditional ones and thus make our diet more sustainable", since protein production through cellular agriculture can be carried out in any environment , as it is not limited to the existence of farmland or livestock.

The benefits are so many that, in the year 2035, it is expected that cultured meat and the rest of alternative proteins -eggs, for example- will represent between 11% and 22% of the total protein consumed by man, something that would allow saving the water consumed by a city like London in 40 years.

Not only is it more sustainable, cultured meat also offers

for the consumer, as it is produced in a controlled biological environment free of pathogens.

"This new nutrition consists of

and food products suited to the needs of each person according to their physiological state, their goals or their risk of suffering from certain diseases or responding better to treatment, determined largely by their genome," he adds. the also director of

the Precision Nutrition and Cancer Program

at Imdea Food, one of the five in which the institute works for the prevention of highly prevalent chronic diseases (along with cardiovascular disease, obesity, childhood obesity and diseases related to aging).

In addition to improving health, the transformation of the sector will also help

, one of the UN Sustainable Development Goals for 2030. It is estimated that around

a third of world food production

50% of this waste occurs at home and has an environmental impact: the production of this uneaten food releases more than 3.5 billion tons of CO2 into the atmosphere.

hunger in the world

: the proportion of the world's population that suffers from obesity or some type of overweight (1/3) is practically the same as that which does not have regular and sufficient access to food.

"In addition to promoting and raising awareness of a more rational consumption of food, innovation and technology can contribute decisively to improving and guaranteeing universal access to them. For example, by enabling a better coupling between supply and demand that reduces waste or generating new ingredients and products", believes Porta.

This is how Oscillum was born, a biotechnological company from Elche (Alicante) that has created an intelligent label capable of alerting, in real time, the state of the food.

The bad smell or the color are the main features that consumers look at to decide if a food is suitable or not to be consumed.

Based on this premise, at Oscillum they have developed a

label for fresh meat and fish that analyzes their decomposition

It is made of

to which they have added chemical indicators that react to the compounds that are produced during the natural process of putrefaction.

The consumer only has to look at its color

, which goes from yellow to green (still safe to eat) and from green to blue (when consumption is no longer recommended).

In addition, it works both for packaged products and for those that have already been opened.

Thanks to this work, they have just won the award for the most

at Alimentaria, the leading international fair for professionals in the sector.

Likewise, new technologies, such as

with information on consumer behavior

and their needs, which will make it possible to know changes in demand and will also help reduce the amount of food that ends up in the garbage.

, allowing, for example, calculating the optimal time for harvesting fruit and vegetables;

the probability that a machine could suffer a failure, avoiding production stoppages;

o identify defects early (for example, predict the risk of breakage of dry pasta and other processed foods or defects in the sealing of packages) and avoid a bad experience for consumers.

Not only will what we eat change, but also everything that surrounds it.

Smart farms will be installed in cities that will produce on demand.

(it is estimated that life expectancy in Spain is increasing at a rate of 10 hours per day), with wider aisles, rest areas and posters more visible.

(a way of designing that takes into account actions aimed at improving the environment of the product or service at all stages of its life cycle) will gain more and more strength.

Fruits that grow in drought conditions

Something vital in Spain, one of the largest fruit and vegetable producers in the world, but also one of the countries most susceptible to desertification as a result of the effects of climate change.

That is why numerous Spanish research groups are world leaders in this field.

Awarded a scholarship through the ComFuturo Program, promoted by the Higher Council for Scientific Research (CSIC) and the General CSIC Foundation (FGCSIC) and with the support of Banco Santander, his research focuses on the search for

fruit varieties that can produce fruit with less irrigation water

, something that contributes to the development of a more sustainable agriculture and that has a great impact on the economy of small and large farmers.

Coming from La Axarquia (Málaga), he has focused his research on the

, as this province, together with Granada, are the world's largest commercial producers of this crop;

, one of the most commercially important fruits at the international level.