“Breaking the resistance of the enemy”: the Ministry of Defense of the Russian Federation published archival documents on the liberation of Mariupol in 1943

The Russian Ministry of Defense published new materials from the funds of the Central Archive about the Donbass operation and the liberation of Mariupol from the Nazis in 1943. Among the published documents are magazines of combat units and formations, award materials, as well as information about the atrocities of the Nazis against Mariupol and captured Red Army soldiers. According to historians, during the Great Patriotic War, the liberation of Mariupol was very important not only in practical but also in symbolic terms. At the same time, analysts note that the radicals currently operating in Ukraine imitate the Nazis in many ways. 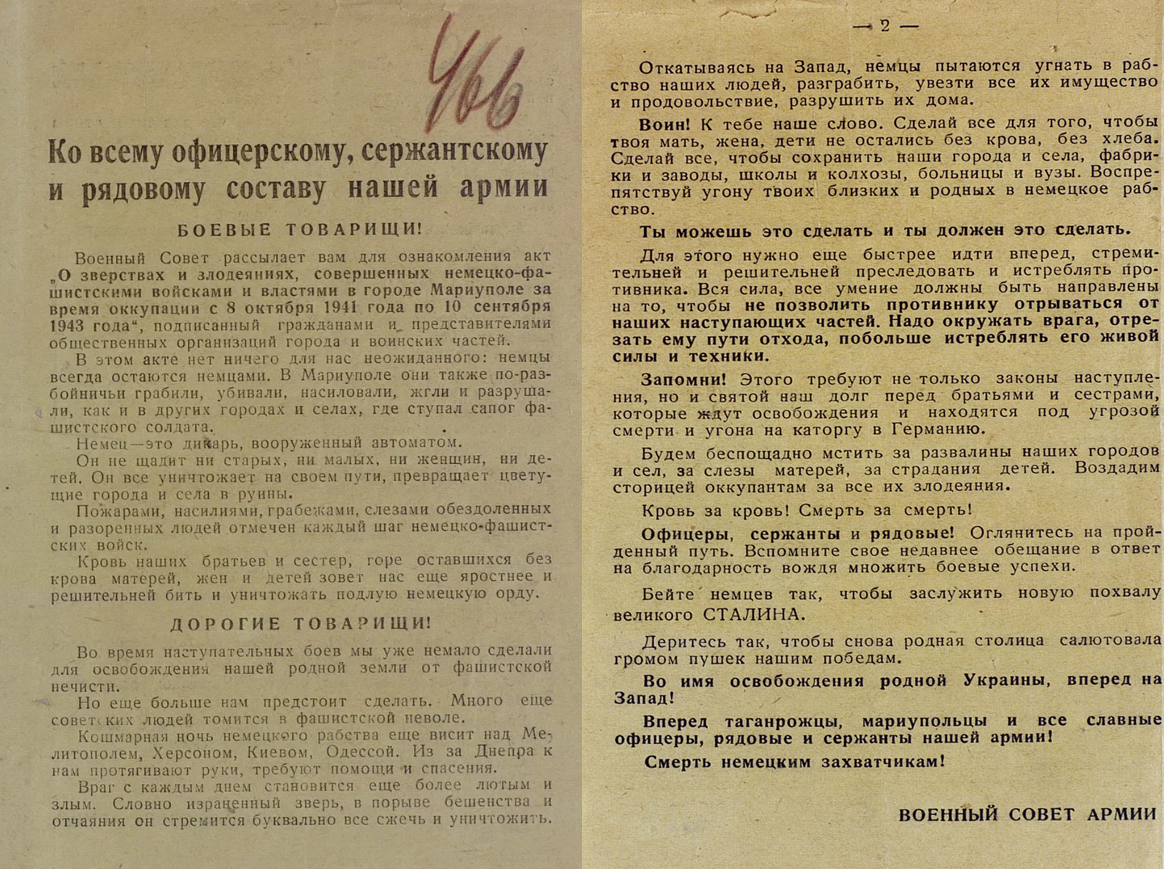 The Ministry of Defense of the Russian Federation has launched a new historical multimedia section “Mariupol.

Liberation”, which presents materials and documents from the Central Archives of the Russian Defense Ministry.

It contains operational documents of the Soviet command, journals of combat units and information about the activities of the Nazis during the occupation of Mariupol.

Archival materials testify that the Nazis mocked the inhabitants of the city and committed monstrous crimes against them.

“The Nazis, like modern Ukrainian nationalists, carried out part of their bloody, ferocious actions in order to discredit the Soviet soldiers-liberators,” the materials of the Russian Defense Ministry say.

This, in particular, is reported in the act, which recorded the crimes of the invaders in the period from October 8, 1941 to September 10, 1943.

“On the first day of the occupation on October 8, 1941, units of the SS captured the first 26 citizens they came across and tortured them to death in the city center in the courtyard of the building of the former NKVD.

They skinned them from their hands, cut off their genitals, ears and noses, and walled them up half-dead in the walls of the basement.

After 13 days, these corpses were dug up and shown to the population under the guise of victims of the NKVD.

This is how citizens Levin, Kogan, Alivanov and others died,” the document says.

For propaganda purposes, the Nazis carried out cruel manipulations with civilians, distorting the realities.

“It was announced that Russian prisoners of war were coming from Rostov and Mariupol residents could pick up their identified relatives.

Thousands of residents came out to meet the prisoners of war in the hope of seeing someone close to them.

But instead of prisoners of war, Nazi troops approached.

At that time, fascist cameramen filmed everything as a “meeting by the Russian population of German troops,” according to archival documents of the Soviet command.

From the first days of the occupation, the Nazis robbed the population, mocked Soviet citizens, killed the elderly, women and children, and carried out mass executions.

“Before fleeing, the fascist beasts deliberately burned and destroyed the city.

From September 7 to 10, 1943, special detachments of torchbearers burned and blew up all public and private buildings, ”the archival evidence says.

The Russian Defense Ministry presented photographs of that period, which depicted the consequences of the occupation of Mariupol by the Nazis.

On one of them - the water treatment plant of the plant named after A.I.

Ilyich, in another photograph taken from a Nazi officer, the bodies of tortured captured Red Army soldiers.

“On September 10, at the time of the landing of the Soviet troops near the Yalta road, the torchbearers abandoned their cars and scattered in a panic towards the houses.

Noticing the old women and children sitting in the pits, the animals shot them from a machine gun.

Among the many killed was Georgy Miroshnikov, master of the port workshops, his two children, the wife of Werner, the workshop accountant, and her housekeeper with a two-year-old child were seriously wounded, ”Soviet documents say.

It was possible to dislodge the invaders from the city thanks to the well-coordinated work of aviation, naval artillery and marines, which took part in the famous Mariupol landing from September 8 to 10, 1943.

This operation was developed on the basis of the successful landing of Soviet marines in the Taganrog region on August 29, 1943.

The commander of the troops of the North Caucasian Front, Colonel-General Ivan Petrov, ordered to prepare a similar operation, but on a larger scale.

In accordance with the plans of the Soviet command, one of the landing units landed in Yalta and took control of an important transport hub west of Mariupol.

The second landing force landed directly in the port of Mariupol.

Then units of the 44th Army and the 4th Guards Kuban Cossack Cavalry Corps entered the city from the east and northeast.

According to archival operational documents, the Nazis, "taking up defenses on the right steep bank, which was covered with individual boulders and stones," thoroughly prepared the defense and equipped numerous pillboxes and minefields.

In addition, the advantage of the enemy was also that from the high bank "the entire surrounding area was visible and there were no hidden approaches for the approach of our units."

However, units of the 625th Infantry Regiment as part of the 221st Infantry Division were able to break through the defenses, cross the river, and reach Mariupol by September 10, 1943.

“The regiment, rapidly moving forward, overcoming enemy resistance, repelling counterattacks by infantry and tanks, entered the northeastern outskirts of the city of Mariupol on September 10, 1943 at 10:00,” the archival documents say.

From the data of the combat log of the 44th Army it follows that it took the Soviet troops a little more than ten hours to completely liberate Mariupol.

“The army, having broken the resistance of the enemy, by 15:30 completely cleared the cities of Mariupol, Zavodskoy, Sartana.

The enemy, under the pressure of our troops, withdrew to the line of temporary storage.

Crimea, Berdyansk Farms, from where he offered stubborn resistance, ”the operational reports of that time say.

The operation was successful not only thanks to the actions of the Soviet command, but also thanks to the dedication and courage of the fighters and commanders on the ground, the Russian Defense Ministry emphasizes.

So, the miner, foreman of the 2nd article Nikolai Kozhevnikov, during the landing of the marines, “was the first to jump into the water, took the gangway from the boat and held it on his shoulders until the landing command was completely disembarked.”

“After the landing, Comrade Kozhevnikov immediately returned to his combat post and, in wet clothes, suppressed enemy firing points from the Oerlikon machine gun.

When returning from a combat mission, the boat was attacked by enemy aircraft several times.

Thus, the tanker, Senior Lieutenant of the Marine Corps Anton Starostin, with his fearless actions, helped to keep the dam of the North Crimean Canal, an important strategic facility for supplying Crimea with water.

He was among the first to break into the crossing and entered into a fierce battle with the enemy.

A Javelin missile hit his tank, but the Russian officer did not withdraw from the battle and continued to carry out the task, while destroying eight armored personnel carriers, two tanks and dozens of enemy soldiers, the Defense Ministry stressed.

According to experts, the operation to liberate Mariupol in 1943 was an extremely important stage in the counteroffensive of the Soviet troops.

“The liberation of Mariupol was an important task not only in practical but also in symbolic terms.

First of all, this operation became the basis for developing the successes of the subsequent counteroffensives of the Soviet troops, the liberation of the territory of the Ukrainian SSR from the Nazi invaders, their allies and accomplices of Nazism.

At the same time, the port city was well known, it was a very important point on the map, and its liberation was of great importance for many Soviet citizens, ”said Vladimir Simindey, head of research programs at the Historical Memory Foundation, in an interview with RT.

From his point of view, the current operation to liberate Mariupol from the Nazis, who took civilians hostage, largely repeats the events of the Great Patriotic War.

“This can be called a grimace of history, its repetition in the form of a bloody, tragic farce.

The Nazis carefully thought out their extermination strategy.

The imitation of it by Ukrainian ultranationalists and neo-Nazis is deeply secondary,” Simindey says.

Along with the use of various paraphernalia of the Third Reich, Ukrainian radicals in their actions are guided by the methods of the Nazis, analysts state.

“Therefore, the power of the nationalists in the territory of Mariupol and its environs led to such terrible consequences for the inhabitants, who were brainwashed for many years and suppressed those who did not agree with the implanted ideology,” Simindey said.