Named Earendel, its light traveled 12.9 billion years to reach us. Rivaling the largest known stars, scientists estimate that its mass is equivalent to… 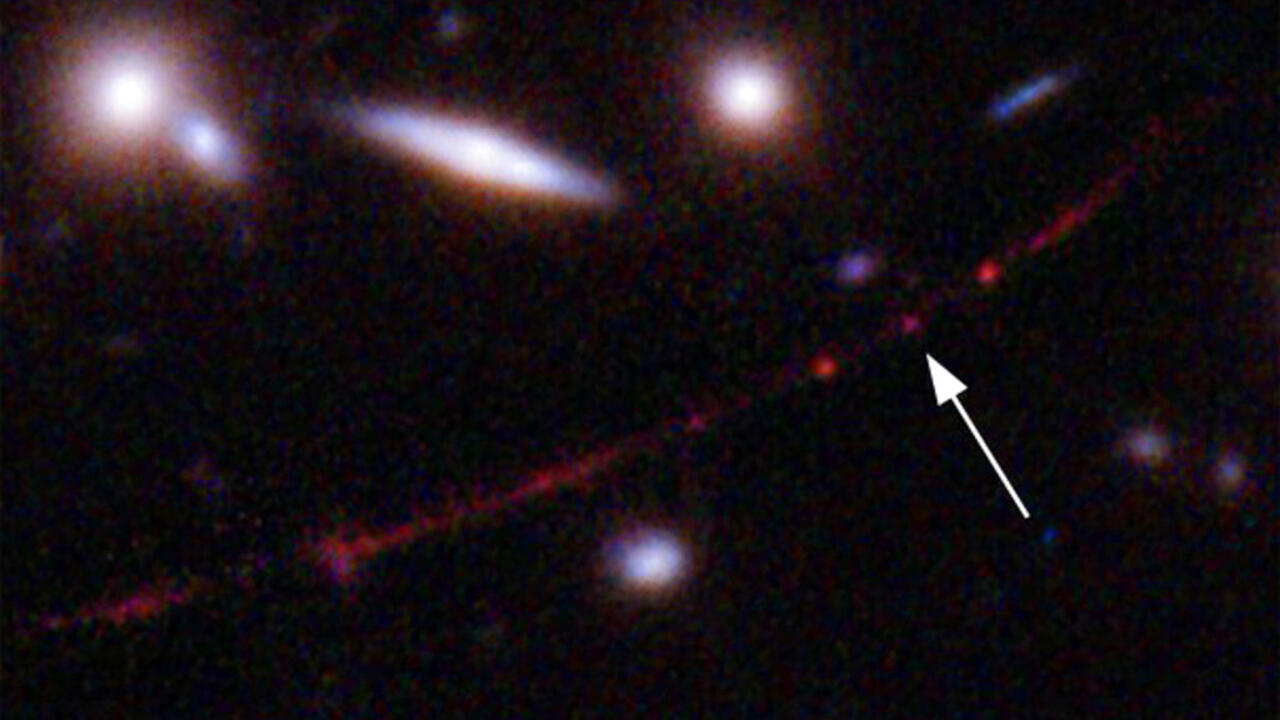 The star Earendel, indicated by an arrow, and the Sunrise Arc galaxy, which runs from bottom left to top right, optically bent due to a massive cluster of galaxies between it and the Hubble Space Telescope on Wednesday March 30, 2022. AP

Named Earendel, its light traveled 12.9 billion years to reach us.

Rivaling the largest known stars, scientists estimate its mass to be at least 50 times that of our Sun and millions of times brighter than it.

The star holding the previous record had also been observed by Hubble in 2018. But the latter existed in a Universe then 4 billion years old, compared to only around 900 million years after the Big Bang for Earendel .

A major discovery, since the study of the star will allow scientists to better understand the first ages of the Universe, which we know how to describe today by models, but of which we have few observations. direct.

The discovery was published Wednesday in the prestigious scientific journal Nature.

At first, we almost didn't believe it

," says the lead author of this work, Brian Welch, of Johns Hopkins University in Baltimore, United States, in a press release.

It was he who had the privilege of giving his name to this star: Earendel, which means "

These objects are so far away that their light only reaches us very faintly.

Just as the sound of an object moving away becomes muffled, the light wave stretches little by little and passes from the frequency visible to the naked eye, to that of infrared.

A closer study of the star

With Earendel's discovery, scientists are indeed reaching the limits of what Hubble can see.

This star will thus be a prime target for

currently being calibrated in space.

James Webb will observe this new star this year, said in a press release the European Space Agency (ESA), which operates the telescope with NASA.

, which has only a small infrared capacity, James Webb will only operate in these wavelengths, allowing us to go back even further.

Until now, only groups of stars could be observed at such a distance, without being able to distinguish a star in particular.

But Earendel had a cosmic help: a phenomenon called gravitational lensing.

A cluster of galaxies, located between us and the star, acts as a magnifying glass amplifying the light of the object.

The ESA compares this effect to ripples on the surface of the water, which in good weather can create amplified light beams on the floor of a swimming pool.

This rare alignment should last for years to come, according to astronomers.

Also to listen: How far will we go in the mists of time?