Rarely has such a humble dish (potatoes, eggs, oil and salt) and a priori simple been so successful and, for having, even has its own day (March 9). And it is that one... 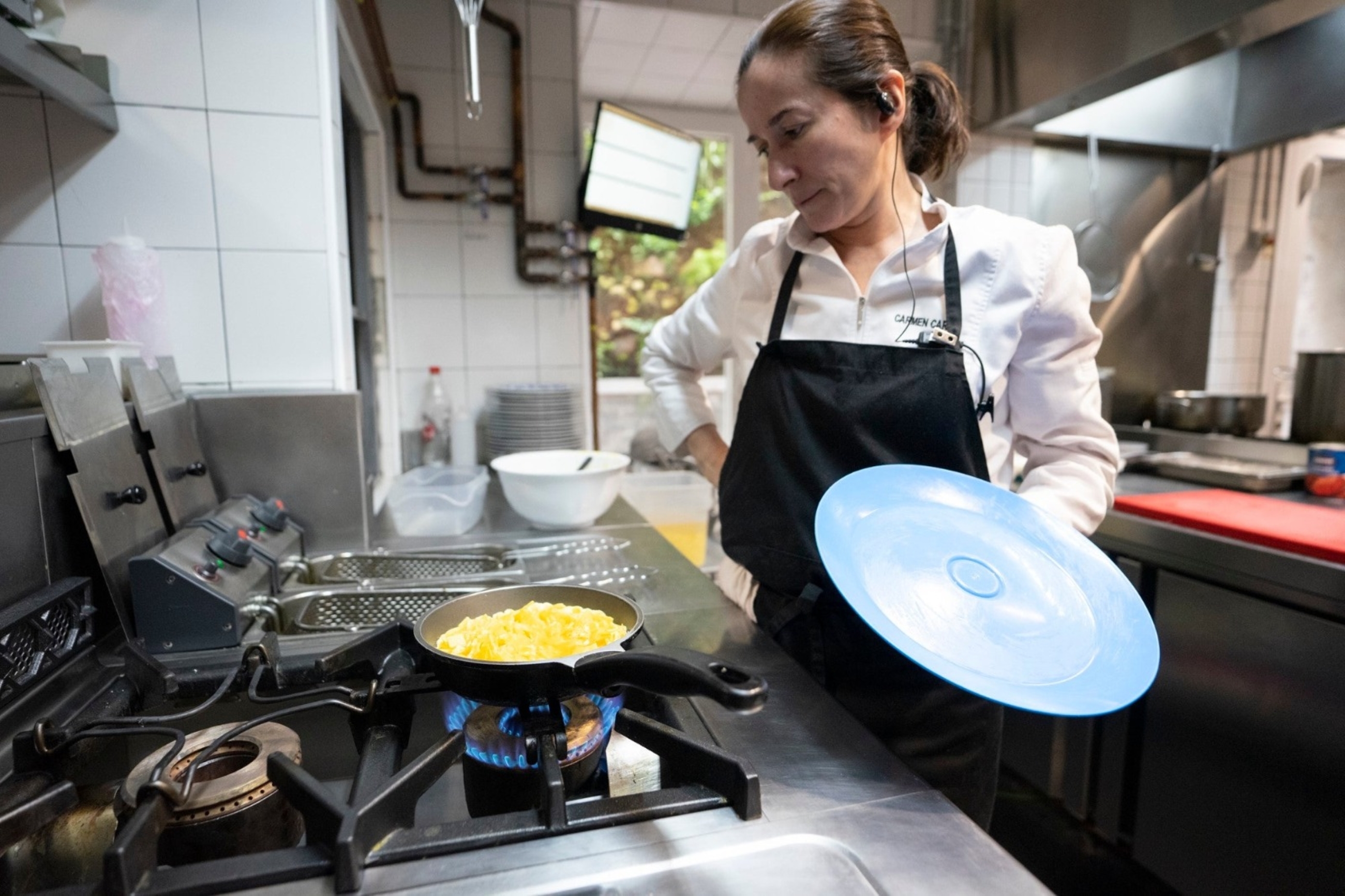 Rarely has such a humble dish (potatoes, eggs, oil and salt) and a priori simple been so successful and, for having, even has its own day (March 9).

And it is that a well-executed potato omelette is closer to a mouthful of gods than mortals, something achieved

by Carmen Carro, from Taberna Pedraza, and Lola Cuerda, from Casa Dani, two great cooks who embroider the tortilla

, each one in his style.

continues to get nervous every time she picks up the frying pan and prepares the first of the day, and despite the fact that -as of March 5- she has made

63,384 tortillas, officially registered in the counter

that since shortly after the opening of Taberna Pedraza (2014) have had in the different locations of the restaurant.

"I think it's out of

For me, the service is very important, I'm going to feed a lot of people who trust me and want to enjoy something delicious. The tortilla only has two ingredients, three, if you count the salt, and you play.

The fewer there are in a dish, the more difficult it is to prepare it

, "explains the cook who has turned

the Betanzos omelette, the croquettes and the stew into the holy trinity of this house

in the Salamanca district (Recoletos, 4).

Carmen Carro, in the kitchen, preparing an omelette.

But Carmen was not always a cook.

After losing her job in the previous crisis, and "already at a certain age and with relatively young children", she reconsidered her life.

"My husband [Santiago Pedraza] told me: '

she recalls today, and boy were they.

For two years they traveled all over Spain -"Santiago, más"- to get to know different dishes of the national gastronomy:

"Looking for recipes from grandmothers and suppliers and learning how to manage a restaurant, because it's not just about cooking

"We fell in love with her. It seemed to us something technically perfect, because, in addition, there is a way to do it and I think it is the only one with a school."

He continues: "You can prepare an omelette more or less curdled, with onion, with vegetables... As you like it, but not Betanzos'; you have to do it that way

And the "so" is more complex than it seems.

... And learn to cook it, because it doesn't come out the first time."

The size and weight of the eggs (from young hens);

beat them with a spoon, not with a fork to wrap them and not aerate them

the temperature and even the moment of adding the salt, everything matters here.

Carmen refines even the smallest detail to achieve a tasty and delicate bite, the result of the formula and technique, but also care, experience... And patience, I should add, because every day she alone gets

, and he never tires of making them... in the restaurant, because

at home, as is "usual among chefs, a wooden knife. I don't cook anything

She has enough to

Not far from there, in the

, there is another tortilla temple: Casa Dani (Ayala, 28), a busy bar where this icon of national cuisine is the star.

Who was going to tell

Lola Cuerda, a hairdresser from a town in Albacete, that one of the consequences of falling in love with a waiter

would be a benchmark for tortillas.

Today they have 44 employees, three more spaces -Tienda (in the market), Casa Dani Lagasca and Casa Dani Terraza (both in Lagasca, 49)- and

even a powerful delivery through Uber Eats.

But let's go back to yesterday and that adventure in the market that went well.

"We cannot complain," he says, because in this family business

they make about 150,000 tortillas a year, made with an award-winning recipe

(in 2019 they won the II Spanish Potato Tortilla Championship).

As I am from La Mancha

; gazpachos with hare, partridge or rabbit; atascaburras... Since we had

everything at our fingertips

in the market , I looked for my manchega potato. the onion of a lifetime, the brown eggs , and I started serving my mother's omelette, but in my own style", a dish with which she has always been successful.

Lola with one of her freshly made tortillas.

We use very good products, always from the market, but it is just as important to know how to treat

them. We began to make them without onions and right away with them as well. It was so successful that today it is the one they ask us for the most, despite the fact that many of our say that he should not wear it.

I owe it to my audience "

"All the tortillas are good, but each one gives it its own touch. I make the potato on one side and the onion on the other, browned. Then I mix the two and curdle it."

Lola is more "by eye" than measuring.

He proudly boasts that his tortillas have traveled halfway around the world.

"I have a good clientele, from the neighborhood and also tourists who, when they return to their country, take them for their people...".

"Every time he visits Madrid, he comes to my house to eat an omelette with tripe."

With equal pride, she talks about her family, her team-"there are cooks who have been with me for 25 years"-and her cast-iron pans that always go with her.

"I took them to Tenerife to the contest, to Madrid Fusión...".

She has lost count of how many tortillas they make a day.

"I don't know, I don't tell you the greengrocer's bill when he comes by in the afternoon...

And in the meantime, are there expansion projects?

"My son Dani is always up to something,

he is always looking around, because we are in high demand."

Not only tortilla, but also oxtail, meatballs, manchego ratatouille, rice with lobster on the Wednesday menu...

Although in the García Cuerda business the queen is the tortilla, and at home, too:

"It is never lacking in family celebrations,"

So far the most purist recipe, although there are formulas that include

ingredients , such as onion, which have given rise to an

endless debate between supporters and detractors of this bulbous presence

In any case, in Madrid we have a great representation of both versions that enjoy fame and recognition.

With candied onion, in Colósimo.

However, what continues as always, because there is no need to change it, is their desired omelette that they serve on a skewer (3.50 euros) and whole (10 euros, the four portions; 20 euros, the large one) and with poached onion , not candied.

With butter, in La Retasca.

(Ibiza, 38) they are faithful to the recipe of Juanjo López Bedmar -advisor to this tavern with a traditional soul located in the

area of ​​Bulbiza- and they make it with onion, but they use lard instead of oil (19 euros; 11 the average).

a century-old tavern and cañí de Malasaña (Colón, 13), they serve a very juicy version, golden on the outside and slightly curdled on the inside, with and without onion.

They serve it on skewers (3.25 euros), but if you want it whole, you can order it to pick up and also at home on their website.

(Ponzano, 12), the house of Paco García, this national snack has star rank.

They do it with free-range eggs and a little onion (2 euros, the skewer; 10 euros, the whole omelette), and for the most traditional they also prepare it with a portion of tripe made at the moment and little curd (20 euros).

it is the emblem of the house (and also of the Cañadío Group).

In its two locations (Velázquez, 54 and Paseo de la Castellana, 212) they opt for the skewer format, which has a legion of admirers for being juicy, rare, very tasty and with onion (4 euros).

They also serve it stuffed with tuna (4.50 euros).

An essential snack since its inauguration 20 years ago, in

(Plaza de Puerta de Moros, 4) they opt for candied onion and Monalisa potato (both in the same quantity).

They serve it on skewers (4.50 euros) and in half or whole tortilla format for delivery/take away (16 and 24 euros).

From one classic to another:

In their successful recipe they use free-range Galician eggs and early potatoes from the south (from April to August) and monalisa from Segovia from October.

We continue with other essential names, in this case, thematic:

Seal of identity of the La Ancha Family, the tortilla is present on the menus of all its restaurants (from the mother house to Fismuler, passing through Taberna La Ancha, in the San Antón Market, where they serve "tortillas with things").

In this space in Chamberí they sell up to seven types: truffled, chips with salmorejo... or the Velazqueña with or without onion (10.50 euros).

In Platea they serve it in a frying pan.

(Goya, 5-7) reopened its doors at the end of October and its potato omelette is already among the favorites in the capital.

Chef Nacho Talavera uses sour potatoes from Vitoria, Galician free-range eggs and onion, lots of onion, and he serves it in a frying pan.

(Espronceda, 17), in the Chamberí neighbourhood.

Their recipe (family and of Galician origin) gives rise to a tasty and juicy version that they serve with and without onion.

Also to take away.

Gastronomy13 'gastro' plans to celebrate Valentine's Day (with or without Cupid)

GastronomyThis is MAD Gourmets, the new 'gastro' (and top) market that is going to give a lot to talk about