There is no doubt that the hamburger, an icon of American gastronomy, is still in fashion. Of uncertain origin, there are theories for all tastes: that if everything began in... 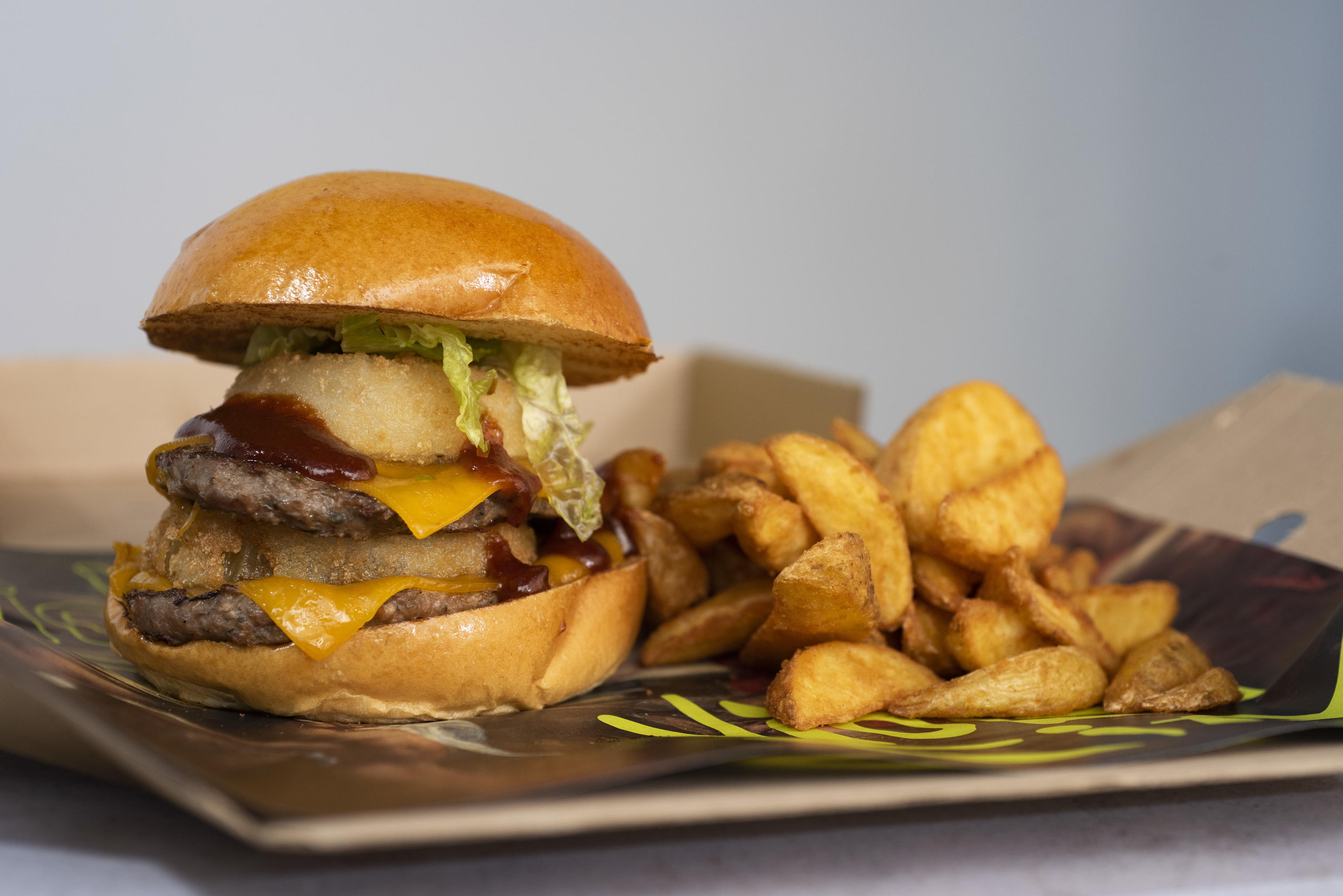 There is no doubt that the hamburger,

an icon of American gastronomy

, is still in fashion.

Of uncertain origin, there are theories for all tastes: that it all started in the 13th century with the meat that Genghis Khan's soldiers put under their saddles;

What if it was the German emigrants (from Hamburg) who, in the second half of the 19th century, brought to the US a version of their meatballs (

Regardless of its origin, the truth is that this format of meat between bread is as popular and global as pizza and has gone from being queen of

To the consolidated hamburger offer of the capital, brands are now added that, coming from other towns, open a place here.

For having, there are even Michelin stars.

Here are more than half a dozen new sites.

'Violence', in The Circle.

(Raíces, Talavera de la Reina) has set out to "burst Madrid"... And at home, because the brand was born here -better reborn, since it emerged during the worst times of the pandemic in the kitchen of his starry dining room and because he continues to triumph in his hometown- as a delivery.

Each of their burgers has a different type of meat

, from Manchego lamb to bull, going through a

pork, cow and sheep), all selected at origin by the winner of

The "great difference of the proposal", as the chef says, is that

The brand, inspired by the nine circles of hell from the

, starts in the capital with

four hamburgers, all inside a brioche bun:

, with bull meat and a fried egg;

, a double burger with pork, beef and sheep meat and double onion rings inside the

, beef with cheese, crispy bacon and smoked bacon bolognese, and

with free-range chicken and pickled jalapeños.

(his Japanese restaurant with a Michelin star since 2019)- landed last December at the exclusive Canalejas Gallery with a double proposal: Monchis, a Mexican with Japanese philosophy, and The Eight, a place dedicated to la brasa, with an informal proposal

where the queens are the "haute cuisine hamburgers", explains the chef.

, as in the rest of its brands, the common thread is the

, with which they prepare, for example, the wagyu

(190 grams and with ferrarini cheese, poached onion and teriyaki and valentina sauces );

(macerated in miso, with leek and kizami sauce)

beef with cheddar and jalapeños) or free-range chicken in tempura with sour sauce.

All are accompanied by a side of potatoes with carbonara sauce.

It is a more than consolidated brand: it already has six stores (one only for

and delivery) in Madrid, the last one

(hence its inclusion in this news report);

They make them every day with meat from La Finca that

they themselves select and mince.

(truffle, Iberian bacon... and a fluffy brioche bread), they have the same amount of meat: 220 grams.

Of the seven proposals on their menu,

the star is their award-winning version of the classic bacon

(with secret dressing and Iberian bacon marinated in Coca-Cola and Four Roses), although

, with pico de gallo, habanero and avocado, and the limited edition hamburger that is changing;

La Alpina is available this month, created in collaboration with Formaje

, the fashionable cheese boutique in the capital.

He landed in Madrid from Valencian lands last September and did it in a big way.

In three weeks, this firm

opened three stores: in the capital, in Alcalá de Henares and in Las Rozas

They make their hamburgers with fresh meat from animals "raised with 100% plant-based food and under animal welfare conditions," the brand indicates, and

cook them in Josper ovens with charcoal embers

Its wide range -17 types, including a special one that changes every month- includes the

the Esla Valley and matured for 32 days

(diners can choose between those made from of vegetables; the

, with soy and pea protein, or the

, from soy and wheat protein).

throughout the year they incorporate new limited edition recipes

Less than a year ago,

their hamburger concept to Chamberí, with which they were successful -and continue to be successful- in Talavera de la Reina (Toledo):

made with meat from the Galician, Simmental, Angus and charra de Salamanca,

raised on their own livestock in the town of Toledo

Every day, the meat is minced and the hamburgers are molded by hand in its open kitchen and in full view of the diner, with which "he

sees how we treat all the ingredients,"

(a nod to the Madrid landing),

Simmental ribeye meat aged for a minimum of 50 days

All are served inside brioche, glass or rustic bread and all have the gluten-free option, "since we have an assembly line that

Another landing in the capital, in this case, from

Alcalá de Henares, where this

American-inspired banner of Monio Group, a company with seven establishments in the Madrid city, was born during the state of alarm.

The Chamberí headquarters replicates the concept of the older sister, which has

the icon of the hamburger restaurant in

Made every day, with cuts of beef from selected breeds (among them, from

) chopped by hand, the proposal revolves around

Hence the rest of the letter are versions of

The proposal (eight hamburgers) is completed with one chicken and one vegetarian.

We started with a new delivery and a winner of

and ended with another innovative proposal at home, Vicio, and

another winner of the same

, who has transferred to the capital the delivery version of the

successful business and establishment of hamburgers that has in Barcelona

in the United States-, from the

The hamburger proposal is completed with one chicken and two vegan.

They are accompanied by fries.

A walk through some classic sites

From small neighborhood stores to renowned chains, including pioneers in bringing this emblematic bite of American cuisine to the capital.

addresses already consolidated and considered essential on any route

, that little corner of the United States that Alfred Gradus opened in the capital in 1981, where his spectacular grilled hamburgers reigned -and still reign-, always among the favorites of the people of Madrid.

, in the Salamanca district, where they make the "best gourmet burger in Spain", winner of the Burger Combat (contest held last October at the Salón Gourmets);

the always original ones that they prepare at

More tracks with past and present:

one from the capital that is now being renewed, and another also traditional,

And there are more names with the gourmet bet as a flag:

, which competes in the second edition of the Best Burger Spain contest with its

with meat matured for 40 days..