[Corona Behind] "What's the difference between 9pm and 10pm?" I asked the government

Once a week, reporters Park's articles and thoughts that were not included in the article are released to readers. [Editor's Note] How many distance adjustments have we made in the two years since COVID-19 was first discovered? I have requested data from the government and received it more than 40 times. 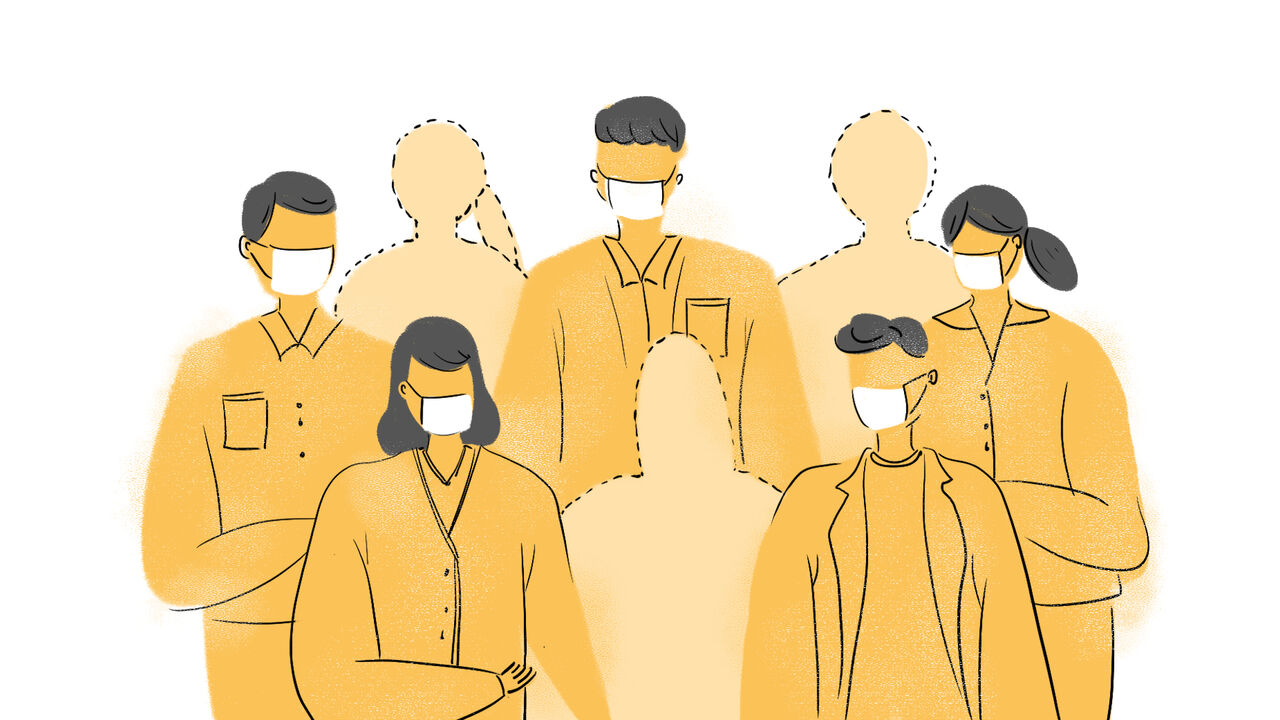 ※ 'Corona Behind' is a report by Park Soo-jin, a reporter from the Life and Culture Department of SBS Press Headquarters, who is running at the forefront of COVID-19 coverage.

Once a week, reporters Park's articles and thoughts that were not included in the article are released to readers.

How many distance adjustments have we made in the two years since COVID-19 was first discovered?

I have requested data from the government and received it more than 40 times.

When did the 'private gathering limit' of 5 or more people start?

It was the end of December 2020, when the number of confirmed cases around 1,000 continued for the first time.

It was in May, before that, the gathering ban began in earnest, in which the business hours of multi-use facilities were restricted or some facilities had to be closed altogether.

Controversy always ensues whenever the content of social distancing is adjusted and the system is reorganized.

In the midst of the spread of the virus, 'maximum infection prevention' and 'minimum damage to property' are not easy to coexist.

Whenever I see the conflict between 'prevention' and 'economy for people's livelihood' ahead of the adjustment of the distance, I often feel the irony of having to choose the right answer from a multiple-choice format with no incorrect answers.

The government announced another plan to adjust the distance on the 18th.

The number of people remains the same, only the opening hours have been delayed by one hour.

I was listening to this presentation as an online briefing in a cafe.

Two women who were sitting next to each other saw the news on their smartphones as 'Breaking News' and were having conversations saying, "From tomorrow, 6 people will be up until 10" and "Can't we do the QR code?"

At the interview site that afternoon, I heard the regret of a small business owner, saying, "I wish it would be extended until around 12 pm."

There are differences in acceptance depending on where you are, but I wonder if there has ever been a case where the government's policy decisions have penetrated so deeply into each person's daily life before.

The decision-making process for the next distance adjustment will start from Wednesday of the week when the announcement is made by synthesizing the number of confirmed cases, the severity of the disease and the death toll, the medical response capacity, and the public opinion trend.

From this point on, journalists are also busy.

Since the government is silent about the direction of the discussion at public briefings or official press conferences, it is often the case that people participating in the discussion or government officials are called individually to ask their intentions.

As a result of SBS coverage, the 'draft adjustment plan for social distancing' that was presented at a closed meeting between the main script and the main script on Wednesday was a little different from what was announced.

The direction was set to ease the distance, and the number of private gatherings was to increase to 8 people, and the business hours to 10 pm for all facilities.

This item went through the Daily Recovery Support Committee the next day.

After each division has a face-to-face or non-face-to-face meeting, everyone gathers to hold a general meeting, which usually runs in 'parallel'.

Quarantine or medical experts (of course) place more value on preventing the spread of infection, and the 'Economic and People's Livelihood Division', where self-employed organizations and representatives of economic groups are gathered, is (of course) to minimize the sacrifice and regulation of the self-employed or small business owners. more focused.

The final decision will be the quarantine strategy meeting presided over by the Prime Minister and attended by ministers of various ministries and held privately.

It usually starts in the late afternoon on Thursday, and it is decided based on the contents discussed through each field until then, and is finalized when the final report is made to the Blue House.

Based on the experience we have covered so far, it is often the case that discussions are turned upside down at this quarantine strategy meeting.

If the daily recovery support committee presents the opinions of private experts in each field, the opinions of each ministry conflict at the quarantine strategy meeting.

It is similar to the Daily Rehabilitation Support Committee, but the difference is that a conclusion must be reached here anyway.

I often hear from officials from the Ministry of Health and Welfare or the Korea Centers for Disease Control and Prevention that “the wall of the Ministry of Strategy and Finance is high”, but that means there is a big difference of opinion.

What is the difference between 9pm and 10pm?

When I write an article about adjusting the distance, the most frequently asked question in comments or e-mails is, 'What is the basis for deciding to reduce or increase business hours by one hour?'

It's a question I've been asked a lot by the government while I've been covering the coronavirus for over a year, but in

conclusion, I haven't heard the 'scientific evidence' that readers are curious about.

In the afternoon of the same day, at the online briefing of the Central Defense Countermeasures Headquarters, he asked again, 'Please explain the analysis of how the 1 hour extension of business hours affects the increase in the number of confirmed cases', but he said, "We are analyzing modeling at intervals of 1-2 weeks. Prediction now We are updating the situation, so it is difficult to give an answer right away.” He said, “We are only updating the predictions related to this (distancing) decision.”

When asked about the 'foundation' of the decision, the answer to 'predicting' was somewhat contradictory.

How was it before that?

The Korea Centers for Disease Control and Prevention (KCDC) provided the results of simulations for predicting confirmed cases in advance on the premise of easing the distance.

However, that prediction was wrong.

At the time, the Korea Centers for Disease Control and Prevention (KCDC) predicted that if the distance was eased under the assumption that Omicron's transmission power was three times that of Delta, the number of confirmed cases would be about 10,000 to 30,000 at the end of February, and up to 1,700 in severe cases.

This prediction was ultimately wrong.

As of mid-February, the number of confirmed cases has already exceeded 100,000.

As the rate of spread of Omicron and the pattern of infection are so unpredictable, the government is also cautious about announcing official forecasts.

At the time when the business hours were limited to 9:00 p.m. before this distance adjustment, I could hear this from several government officials.

“When we analyzed the credit card data, the amount of payments rose once at around 9:30 and then again at around 11:30. To set the business hours limit at 9:00 so that the meeting can be completed in the first round. Limit the time and limit the number of people. There is also a result that solving the problem reduces the number of confirmed cases by half.”

The analysis data of the Korea Centers for Disease Control and Prevention (KCDC) shown earlier also contains the content that "time limit is more effective than limiting the number of people for distancing measures."

Regarding the background of the reversed decision, the government responded:

"I would like to say that this adjustment of the distance was inevitably made minimal. It is true that there were many requests from the self-employed and small business owners to lift even the limit of business hours rather than private gatherings, to abolish it. Therefore, we are inevitable. As a result, we have decided to limit our business hours to 10 p.m. only for all facilities.”

It was said that some of the opinions of self-employed and small business groups were accepted, but it was not a satisfactory conclusion for them.

Regardless of the distance, the super-precipitation of 'open 24 hours' was stopped, but he foretold a candlelight vigil, saying, "Extension of 1 hour is meaningless."

Distance that wasn't scientific in the first place?

Just because you're a quarantine expert doesn't mean you're in favor of social distancing.

Although the opinions of experts are different, there are many experts who claim that the current government method of distancing is not scientific in the first place.

After the announcement of the social distancing adjustment plan on the 18th, the Central Clinical Committee for New Infectious Diseases responded to a question from the SBS reporters, saying, "There is no scientific evidence that restricting the business hours of restaurants or cafes suppresses the spread of Omicron."

( ▶Related articles: Confirmed cases? Severe severity? Distance adjustment measures, where did you put the 'standards') Among the private experts who advise the Daily Recovery Support Committee, 'there is no evidence that easing or strengthening social distancing will affect the spread of infection. It's hard to give an opinion because you don't have it.'

On the other hand, while agreeing that social distancing has no scientific basis, some experts are concerned about the government's easing stance because of the government's message to the public.

He said that the current situation, where the number of confirmed cases increases by tens of thousands in a few days, is a 'crisis', and the 'contradiction' of easing the distance while saying that the quarantine rules are adhered to and movement is minimized can confuse the public.

Although it is a slightly different story, when the Omicron medical response system was reorganized and most confirmed patients were separated into general patient groups and quarantined for 7 days without health monitoring, the government said that it was “to intensively manage high-risk groups”. Although I explained it over and over again, many general patients who had to receive treatment at home in the new system complained that they were 'being neglected'.

There is a gap between the government's message and the public's acceptance.

( ▶Related article: [Corona Behind] Are we ready for corona 'self-treatment'?)

Rather than just rebutting the government's policy as "absurd criticism" that misunderstood, I would like you to take a deeper look into the confusion underlying its essence.