[Corona Behind] Are we ready for corona 'self-treatment'?

A high-pitched voice could be heard over the phone. "It's so frustrating. I think the whole nation will be infected by this." The informant's mother, in her 60s, had colorectal cancer that had spread to the liver two years ago and underwent surgery, and she is still under follow-up. 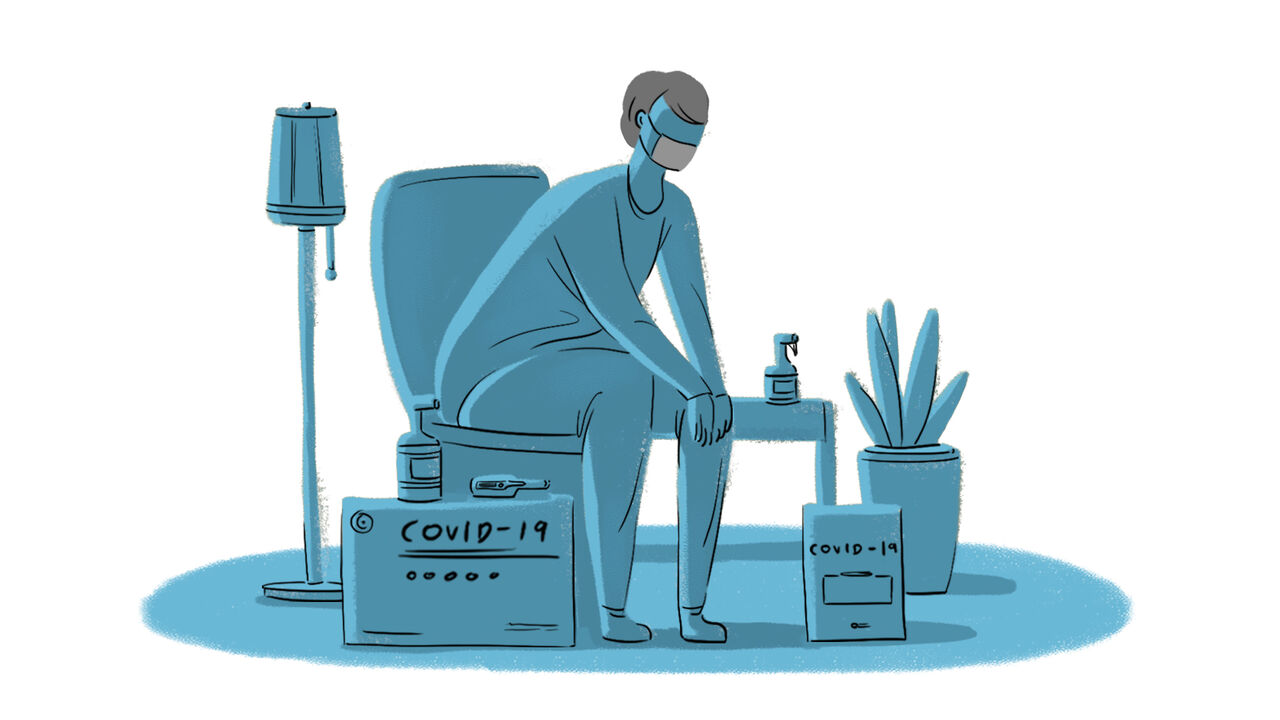 A high-pitched voice could be heard over the phone.

"It's so frustrating. I think the whole nation will be infected by this."

The informant's mother, in her 60s, had colorectal cancer that had spread to the liver two years ago and underwent surgery, and she is still under follow-up.

She was upset because she hadn't heard from me in five days.

Although she doesn't live together, she said she wasn't informed if she was in close contact with her mother and had two meals together or how long she should be quarantined.

As a result, Mr. Lee never met anyone.

The front door of the public health center was closed, and the public could not enter through the passageway through which the staff entered.

It is said that there were family members of other confirmed patients who 'can't wait any longer' like myself at the door of the public health center.

I called again to see if the problem had been resolved and if her mother's health had improved.

Fortunately, the day after I went to the public health center, that is, the sixth morning after I was confirmed, the health center contacted me.

Her mother said fortunately that her condition did not deteriorate and that her quarantine had been lifted.

However, she was not satisfied with everything that the public health center contacted her.

“My mother is an elderly person in her 60s, and she also has underlying diseases, but as the government announced, Paxrovid was not prescribed? No. The quarantine has been lifted now, but I'm worried about your health, so please don't leave the house."

Lee's mother was confirmed before the government reformed the home treatment system.

The core of the newly changed home treatment is to separate and manage the high-risk group, who are the subjects of Paxrovid, such as the elderly 60 years or older, those with underlying diseases in their 50s, and the immunocompromised, and the rest of the general patient group.

The fundamental reason for the reform is that the government's ability to manage at-home has exposed its limits.

As the number of patients receiving no care is increasing, as in the case of Mr. Lee's family, 'focusing our capabilities on high-risk groups who need more management' is a realistic alternative chosen by the government.

The reorganized system has been applied since the 10th.

Of course, it will take some time for the new system to take hold, but Omicron's diffusion rate doesn't allow for that.

This is because the number of confirmed cases has exceeded 50,000, and the number of home-managed patients is increasing day by day.

Another informant, Lim, spoke on the phone on the 11th.

A man in his mid-60s, he was confirmed the previous morning.

I even received an epidemiological investigation letter that I had to write myself, but that has been a problem since then.

People in their 60s with high blood pressure and heart disease are a high-risk group that is subject to intensive care in the new home management system of the government.

However, after the first call from the epidemiological investigator at the public health center, "The bedside treatment is difficult and I have to treat myself at home. The home management team will call you," I did not receive any contact for two days.

Over the phone, Mr. Lim coughed frequently, and his voice cracked.

He has no fever, but he has severe chills, Lim said.

"My wife, fortunately, came out with a voice. So, I asked to go to the public health center. I haven't answered the phone all day. So go and ask what I should do. I'm not sure if I'm in the high-risk group or what kind of treatment I should get. Nothing right now. I don't know. The prime minister came on TV this morning and said that the government doesn't neglect it, but this is neglect. If not neglect, what is neglect?"

Government 'not neglecting at home'

I believe that the government's reorganization of home treatment was an inevitable choice.

The existing medical response system, centered on public health centers, had already exposed its limits to taking over everything from epidemiological investigations to patient assignment and home treatment management.

Human resources and systems are bound to have limitations, so it seems like a common-sense choice to avoid serious situations as much as possible by pouring this limited capacity on more dangerous people.

However, just because a policy has a good purpose and the right direction is not always a 'good policy'.

A policy that does not exert its power in the daily life of the people loses meaning, no matter how good the purpose is.

In addition to Mr. Lee and Mr. Lim, whom we saw earlier, reports from patients who have directly experienced home treatment are pouring in every day.

Not much has changed since the government announced the new system.

What the informants said in common was 'they were not given guidance on what to do and how', and 'they were neglected'.

However, the government's own assessment is a little different.

The media has expressed discomfort several times over the use of the terms "stay at home" or "self-absorb".

It is saying that the government is not giving up its hands, as the public health center is expanding the management of corona patients to the primary hospitals (neighborhood hospitals and clinics), and switching to 'autonomous quarantine' as the people are observing the quarantine rules themselves.

At the same time, the media reports expressing “stay-at-home” were evaluated as 'does not reflect the content properly' and 'extreme'.

"It is necessary to supplement the limited administrative power with quarantine based on the people's autonomy and cooperation. We call it autonomy and cooperation, but there seems to be a view that reporters are neglectful and self-absorbed. General officials also have local hospitals and clinics and home counseling centers. You can get counseling from . They keep saying 'neglect', but I don't think it reflects the contents of our new system properly."

"Even radical expressions such as "abandonment of control", "abandonment at home", and "self-absorption" are appearing. In line with Omicron, which has strong radio wave power, we will focus our medical capabilities on those in critical condition, but make it clear that appropriate medical services are being provided to the rest of the people.”

As the government emphasizes, is the treatment of at-home patients that have spread to primary hospitals going well?

It is still too early to evaluate this part.

As I said before, it's been less than a week since the new system started.

However, as the government said, it is necessary to point out whether adequate medical services are being provided to general patients.

The government is disclosing a list of hospitals and clinics where general home patients can receive non-face-to-face treatment and prescriptions over the phone through the Health Insurance Review and Assessment Service website ( ▶List of Home Treatment Medical Institutions).

The Ministry of Health and Welfare said in a briefing on the 10th, "About 2,500 medical institutions have expressed their intention to participate, and services will be available from the 10th."

This is because there are not many hospitals and clinics that do not answer the phone or say that they are not ready yet.

I made direct calls to several hospitals that are listed as hospitals available for treatment on the website.

Reporter at Seoul Hospital A

: I called because it was possible to receive a prescription for home treatment over the phone.

Hospital: We haven't started yet.

Reporter: That prescription and support can be consulted.

We haven't started yet.

Reporter: When do you start?

Hospital: The exact date has not been set yet.

Hospital: We haven't done it yet.

Reporter at Seoul B Hospital

: I heard that it is possible to receive phone consultation and prescription for home treatment for Corona.

Hospital: We haven't reported it yet.

I'm trying to figure out how it goes.

When is it possible?

Reporter: The website of the HIRA says that this hospital is possible.

Our hospital is up?

It's been over two years since I lived with the coronavirus.

Although it seems that we are used to it, the daily life of tens of thousands of new confirmed cases is also unfamiliar and frightening.

In fact, it was not long ago that, if confirmed with Corona, it was natural to receive treatment by unconditionally entering a hospital or living treatment center.

Just a month ago, more patients were hospitalized than at-home patients.

The government is saying, 'Just like visiting a local hospital first when you are ill with another disease, you can get treatment through the hospital you normally go to for Corona', but this new system is still insecure and awkward for the people.

In order for the changed system to be accepted as 'autonomous treatment' rather than 'stay at home', we need to listen more to the voices of the field.

These questions were asked during phone or video interviews with patients who have experienced or are undergoing home treatment.

“You have experienced real home treatment, is there anything you would like to suggest to the government?”

The answers given by the patients were actually not very grandiose requests.

"When giving a positive test call, I would like you to tell us more about your current situation. 'There are so many patients who need to be contacted now, so don't worry as it may take a few more days for the next call to arrive. Patients with symptoms like you do not have these characteristics. I have this kind of medicine at home, which would help.' Something like this."

(A woman in her 40s who was confirmed with her husband)

"These days, even if you call a private hospital, if there is a lot of calls, they leave your number and call back? Can't we do this? There are so many confirmed cases."

(A man in his 30s who was diagnosed with the diagnosis)

"Even if I search for 'hospitals that can treat at home' on the portal site, there is no proper information. The government sends a lot of informational messages, right? Wouldn't it be easier if I send it to you?