Immortal garrison: the Ministry of Defense of the Russian Federation published archival documents on the anniversary of the lifting of the blockade of Leningrad

The Russian Ministry of Defense opened on its website a multimedia section “We are the Leningrad army soldiers, the Immortal Leningrad garrison”, dedicated to the exploits of Leningrad volunteers during the Great Patriotic War. The section presents declassified documentary materials describing the formation and combat operations of the Leningrad People's Militia Army (LANO) and the Leningrad Air Defense Army: magazines, maps, award lists, as well as operational documents of the period of the operation to break the blockade of Leningrad. 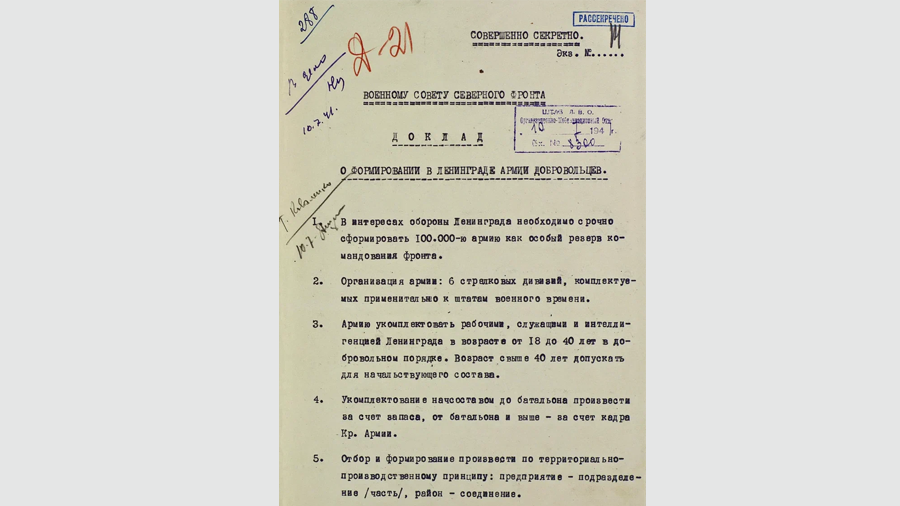 On January 27, 1944, the blockade of Leningrad was completely lifted by the Soviet troops, which lasted 872 days.

To commemorate the 78th anniversary of these events, the Ministry of Defense of the Russian Federation launched a new historical section on its website "We are the soldiers of the Leningrad army, the Immortal Leningrad garrison."

It contains declassified archival documents on the formation and combat operations of the Leningrad People's Militia Army and the Leningrad Air Defense Army.

The blockade of Leningrad began on September 8, 1941, when Nazi troops occupied Shlisselburg and completely blocked Leningrad (now St. Petersburg) from the land.

According to historians, the German command decided to completely wipe Leningrad off the face of the earth and destroy the population of the city.

In September 1941, Nazi aircraft bombed the warehouses, which stored a significant part of the food supplies for the population of Leningrad.

There was famine in the city.

Its victims, according to some sources, were about 1 million people.

“The actions of the Nazis near Leningrad had all the signs of genocide.

It was a deliberate destruction of the civilian population.

But, despite hunger, cold, bombing and shelling, Leningrad courageously resisted the enemy.

Thousands of Leningraders from the first days of the war voluntarily went to the front to defend their city, ”Andrei Koshkin, a full member of the Academy of Military Sciences of the Russian Federation, said in a conversation with RT.

Thousands of people came to the assembly points of the military registration and enlistment offices of Leningrad: both those who were subject to conscription for mobilization and volunteers.

The Soviet command decided to form in Leningrad, as a special reserve, a 100,000-strong army of people's militia from workers, employees and representatives of the intelligentsia aged 18-40.

Thus began the history and combat path of the Leningrad People's Militia Army.

In a new section on the website of the Ministry of Defense of the Russian Federation, a corresponding resolution and report of the military council of the Northern Front are published.

“The 4th division of the people's militia is operating successfully.

) of this division occupied vill.

On the night of September 4, the 3rd SP crossed the Tosno River and captured the village of Pokrovskoye.

The enemy suffered heavy losses in people and materiel, ”says the political report of the Political Directorate of the Leningrad Front for September 10, 1941.

The same document emphasizes the contribution of the Leningrad combatants to the medical support of the active troops of the Red Army.

in the battle on August 26, she provided first aid and carried 42 wounded soldiers with weapons from the battlefield.

Being herself wounded three times, the combatant did not go to the rear until all the wounded were evacuated, ”the document says.

Particular attention is paid to volunteer medical units on the pages of the historical form of the 67th Infantry Division, which included the 3rd Medical Battalion, formed mainly from female volunteers.

“Druzhinnitsa Tasya Sharchenko for three days, having lost contact with her unit, continued to provide assistance to the wounded and brought the seriously wounded commander and three fighters to the village of Nurmalitsa, and then ended up in the hospital with them,” the document says.

By September 1941, about 135 thousand volunteers fought in the ranks of divisions and individual battalions of the Leningrad people's militia.

Subsequently, regular rifle divisions of the Red Army were formed on the basis of seven volunteer formations.

Documents detailing their combat path have been published in a new section on the website of the Ministry of Defense.

“Reflecting the repeated attempts of the Germans to cross to the western bank of the river.

Tosno, the 2nd joint venture stubbornly held this coast in its hands.

Turning into counterattacks, he threw back German units to the east coast.

The enemy tried to disorganize the defense of the regiment with strong mortar and rifle-machine-gun fire.

In a number of multi-day battles, the regiment suffered significant losses, ”this is how the first battle of the unit’s units in September 1941 is described in the historical form of the 13th Infantry Division.

The documents of the 80th Infantry Division (formerly the 1st Guards Leningrad Division of the People's Militia) give figures indicating the good combat skills of volunteer soldiers: “For the entire period of hostilities since December 1941, the division destroyed: over 27,800 soldiers and officers, 23 tanks, 58 guns of various calibers, 76 different mortars (including 6 six-barreled ones), 318 bunkers, 3 armored vehicles, 165 machine guns, 46 vehicles, 114 horses, 14 aircraft were shot down.

The historical form of the 189th Rifle Division (the former 6th Leningrad People's Militia Division) contains evidence of the development of a sniper movement in its ranks.

It is noted that the division's snipers destroyed about 11 thousand enemy soldiers and officers.

“Among those awarded: Senior Lieutenant Torchinsky, who was awarded a high government award - the Order of Lenin.

He destroyed 26 Germans from a rifle in two days and thus laid the foundation for a sniper movement in the division, ”historical documents describe the feat of a soldier of the 44th Infantry Division (the former 3rd Guards Leningrad People’s Militia Division).

According to the military historian Sergei Perelygin, Soviet troops repeatedly attempted to break the blockade ring, but this was only possible during the operation, codenamed Iskra, which was carried out from January 12 to 30, 1943.

“The path known as the “Victory Road” was paved.

He allowed Leningrad to be transferred to the same supply standards as other cities of the USSR, ”the expert emphasized in a commentary on RT.

In a new section on the website of the Ministry of Defense, an operational map has been published, which shows a diagram of the position of the enemy before the start of the Soviet offensive.

More detailed information about the Nazi troops in January 1943 is contained in the directive of the headquarters of the Leningrad Front to the Military Council of the 67th Army.

The historical form of the 86th Rifle Division (the former 4th Leningrad People's Militia Division) emphasizes that it "honorably completed its task of breaking through the blockade of Leningrad" during the period of active hostilities to capture the city of Shlisselburg.

The new section on the website of the Ministry of Defense also contains descriptions of individual exploits of the fighters of the Leningrad volunteer units.

“At the very height of the attack, a fascist machine gun opened fire on the attacking fighters from the right. The soldiers began to suffer losses, there were signs of confusion, the machine gun began to threaten the success of the unit. Sapper Labutin moved forward, prepared the only grenade remaining in his hands and, despite the destructive fire, the danger, approached the embrasure and threw a grenade into it. The machine gun was silent for a moment, but spoke again. A fearless communist, sapper Labutin rushed to the embrasure again, but without a grenade, but in order to close the embrasure with his body and thereby contribute to the success of the battle. Approaching the embrasure, Labutin grabbed the barrel of the firing fascist machine gun and at that moment was mortally wounded in the heart. The company continued the attack thanks to the courageous act of Labutin and completed the task of capturing enemy trenches, ”- says in the award documents for Peter Labutin.

The section also contains documents testifying to the exploits of the fighters of the Leningrad Air Defense Army, formed to protect the city and the Road of Life from air strikes.

“The whole burden of repelling the raid (57 German bombers and 12 fighters. -

) fell on anti-aircraft artillery, since the IA (fighter aircraft. -

) was late with the departure.

With a powerful barrage of anti-aircraft artillery, the bulk of air pirates were not allowed to enter the city, and only 9-10 bombers managed to break through to Leningrad, ”says one of the reports.

The report of the commander of the Leningrad Air Defense Army to the Military Council of the Leningrad Front notes the need for additional mobilization of 2,000 Komsomol girls to complete the calculations of telephonists, instrument operators, intelligence officers and the balloon barrage service.

The blockade from Leningrad was completely lifted on January 27, 1944.

“This allowed us to begin the process of returning the city to a peaceful life.

Leningraders could finally not be afraid of enemy artillery shelling, which claimed the lives of a huge number of civilians, ”said Miroslav Morozov, a senior researcher at the Institute of Russian History of the Russian Academy of Sciences, in a conversation with RT.

According to Andrei Koshkin, the defense of Leningrad, in which the inhabitants of the city themselves took an active part, played a colossal role in the history of the Great Patriotic War.

“It was a heroic struggle for the lives of civilians, who, according to the plans of the Nazi leaders, were subject to complete destruction.

But it was also the fettering of the huge forces of the Wehrmacht and its allies, which did not allow this entire armada to move on Moscow.

If Leningrad had not been held, the history of the whole world could have turned out differently, ”Koshkin emphasized.