These are (some of) the most spectacular palaces in Spain

There are countless palaces that dot the Spanish geography, a symbol of the historical importance of our country throughout history. Some have the Royal surname... 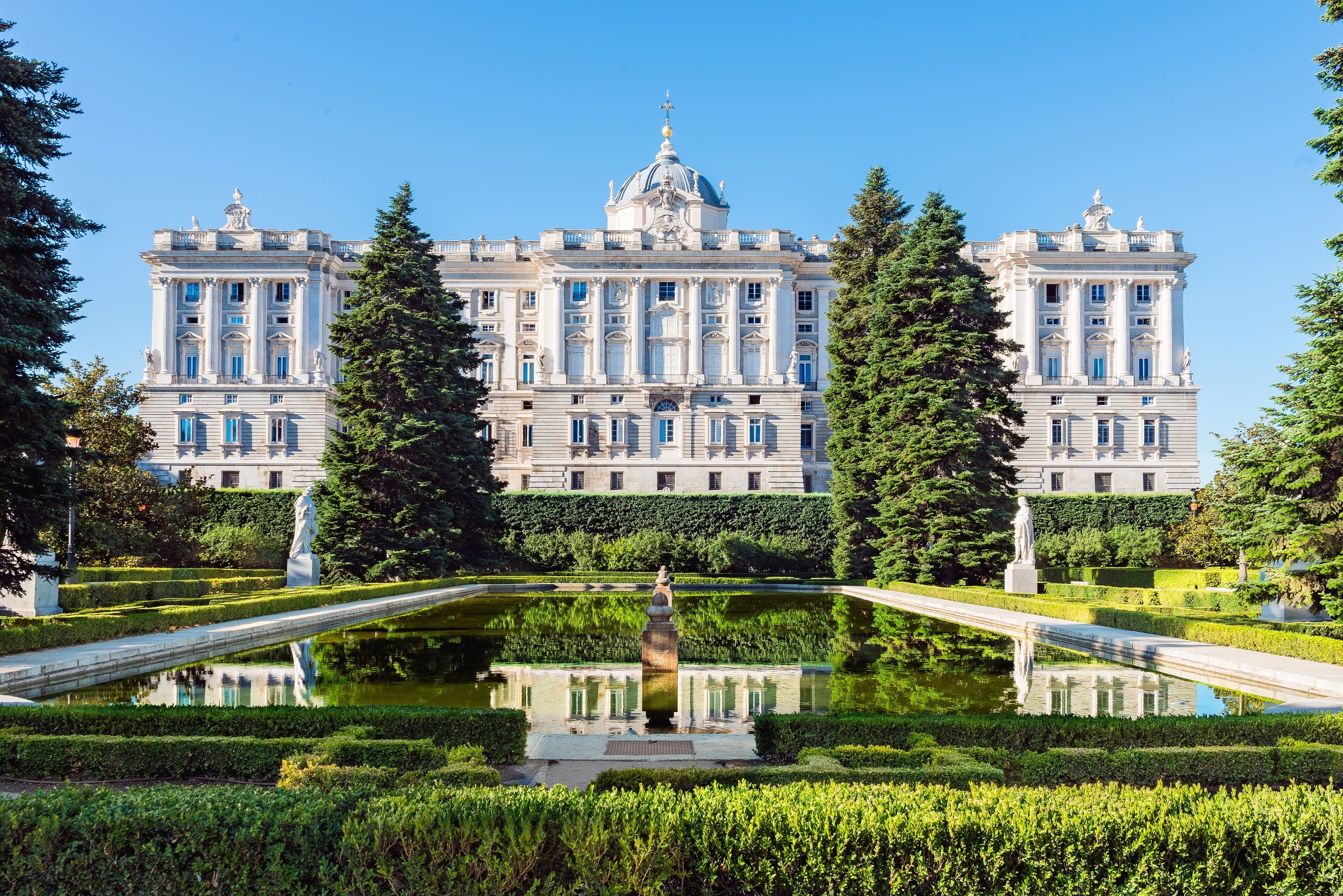 There are countless palaces that dot the Spanish geography, a symbol of the historical importance of our country throughout history.

Some have the Royal

for having been the dwelling or temporary residence of the different monarchs, but most are important and imposing buildings that once belonged to large and wealthy renowned families (some remain) and that today have become the headquarters of public organizations or private institutions.

We review some of these impressive palaces.

It is, without a doubt, the most beautiful and important palace in Spain.

Located where the Alcázar used to be, it was ordered to be built by Philip V in the French Baroque style in 1735. It is the largest royal palace in Western Europe (double the area of ​​Buckingham Palace and Versailles), with more than 135,000 square meters and 3,418 rooms, and one of the few official residences of Heads of State open to the public.

Every year almost 2 million visitors discover corners such as the Throne Room, the Royal Armory, the Hall of Columns, the Royal Chapel, the kitchen and its beautiful gardens, among others.

Impressed by the beauty of the place during a hunt, Felipe V ordered Teodoro Ardenas to build a small baroque palace with large gardens at the beginning of the 18th century in the town 13 kilometers from Segovia.

The monarch would end up moving there in 1724. It was also the summer residence of the Bourbons.

The complex is made up of the palace itself and a series of adjoining buildings, surrounded by impressive gardens, one of the best examples of garden design in 18th-century Europe.

The palace is known as "Little Spanish Versailles" for its beauty and French influence.

It is another of the royal residences that the Madrid court had.

Almost completely destroyed by fire in 1748, Felipe II entrusted the task of reconstruction to the architect Juan Bautista de Toledo, who built a French-style palace today listed as World Heritage by UNESCO.

It is surrounded by a total of 111.23 hectares of beautiful fountains and gardens that can be visited, such as the Fountain of Apollo or the Garden of the Prince.

Inside, the dining room, the room of mirrors or the porcelain cabinet stand out.

It is one of the most visited enclaves in Santander.

Located on the homonymous peninsula, it was built in 1911 by municipal initiative to give it as a summer residence to the kings Alfonso XIII and Victoria Eugenia.

Currently, the Palace is used to host conferences and meetings, as well as a museum that recreates the charm of the former Royal Residence.

The most emblematic building in the city is eclectic in style with influences from the English stately buildings of the time.

Another palace of eclectic architecture is this construction from the beginning of the 20th century in the heart of Zaragoza.

It was commissioned to the architect Félix Navarro, one of the most prestigious of the time, in 1901 by the Basque shipowner Miguel Larrinaga de Luzárraga, and its construction is dominated by stone, brick and ceramics.

It has been the headquarters of the offices of a factory and college-residence of the Marianist brothers and is currently owned by Ibercaja, which restored the palace to use it as a center for documentary collections.

The decoration of the property alludes to the sea and maritime trade, occupation of Larrinaga and the materials used are specifically Aragonese.

Palace of the Lions (Granada)

Palace of the Lions, in the Alhambra (Granada).

It is one of the Nasrid Palaces located within the Alhambra in Granada, which was one of the private rooms of the royal family of Mohamed V in the fourteenth century.

The light, the water, the color and the exquisite decoration make it one of the most beautiful palaces in Spain and in the world.

It is made up of a central patio surrounded by galleries of columns as a Christian cloister, which allows access to different rooms: Mocárabes, Los Reyes, Dos Hermanas, Ajimeces, Mirador de Daraxa and Los Abencerrajes and el Harén.

After the conquest of the Nasrid kingdom, the Catholic Monarchs established their residence there.

Spectacular palace, emblem of the Leonese town, built in 1889 by Antoni Gaudí commissioned by Bishop Joan Baptista Grau, from the old Episcopal Palace of Astorga that was in ruins. The famous modernist architect abandoned this neo-Gothic palace that mixes palatial and cathedral elements on the death of the bishop, and it was others who finished the palace. The medieval-style building is listed as an Asset of Cultural Interest, has four cylindrical towers at the corners and is surrounded by a moat. Inside, the ornamental richness achieved with various materials (granite, brick, plaster, mosaic, ceramics, sgraffito, stained glass) stands out, and it combines various styles, from Gothic and Mudejar to naturalistic motifs,passing through capitals with starry abacuses inspired by the Sainte-Chapelle in Paris. The palace was converted into a museum dedicated to the Camino de Santiago in 1962.

The current seat of the Galician city council, in the Plaza de María Pita, is an imposing modernist palace in a grandiloquent eclectic style built by the architect Pedro Ramiro Mariño and inaugurated by King Alfonso XIII in 1927. It has three domes and in the Inside there is an exhibition hall, the Clock Museum and the Golden Hall, whose seats are decorated with reliefs that recount some of the most important historical events of the town.

Next to the Torre del Oro and on the banks of the Guadalquivir lies this spectacular baroque building built between the 17th and 18th centuries to house a sailors' college.

Currently, it is occupied by the Presidency of the Andalusian Government, but previously it was the Colegio de la Marina (attended by the poet Gustavo Adolfo Bécquer), headquarters of the Railway Society or Literary University.

Inside, the main patio stands out, surrounded by a gallery supported by semicircular arches.

From there you can access the chapel, one of its most outstanding artistic elements, with frescoes by the local romantic artist Antonio Cabral Bejarano.

This example of Bilbao architecture from the end of the 19th century, reminiscent of the Flemish Renaissance, presides over the Plaza de Moyúa in the heart of Bilbao.

The current headquarters of the Government delegation in Vizcaya was designed by the Belgian architect Paul Hankar, who designed it in 1889 inspired by the Zegers-Regnard hotel in Brussels built by himself.

It was the home of the businessman Víctor Chávarri, Marquis of Triano and today one of the most notable buildings in the Basque city.

It stands out for its original façade, for having all its different windows and for its peculiar roof.

Also known as the Palace of the Marquis of Comillas, located in the homonymous town, it was the work of the Catalan architect Joan Martorell, who built it to order in 1888. It includes the Chapel-Pantheon, both buildings considered two jewels of the Cantabrian Neo-Gothic.

Among the main rooms of the house are the billiard room, the dining room, the throne room, the library and the majestic alabaster staircase of the hall with overhead lighting through a polychrome stained glass skylight.

Palace of the Infantado (Guadalajara)

Palace of the Infantado (Guadalajara).

The Palace of the Dukes of the Infantado is a 15th-century building, built in 1480 in Elizabethan Gothic style with Renaissance elements, such as diamond points and stone carvings that decorate its spectacular façade, one of its main attractions.

Inside, its rooms are arranged around the Patio de los Leones, highly decorated, with a beautiful Gothic balcony.

The gardens are also an attraction to visit this impressive palace.

Inaugurated in 1491 as the Colegio Mayor, it owes its foundation to Cardinal Pedro González de Mendoza and is one of the first examples of Renaissance art in Spain, although it was designed in the Gothic style.

It is entirely carved in limestone ashlar masonry and the portal, with a semicircular arch, was decorated with fine grotesques, taps, dolphins and botanical themes.

Inside, there is the only patio that the property had.

Currently, it houses the bookstore that belonged to the College of the Cardinal, the central dependencies of the University, the Rector's Office and other university administrative bodies.

This palace built between 1885 and 1890 commissioned by the industrialist Eusebi Güell to the architect Antoni Gaudí is located in the center of Barcelona.

The modernist building, declared a World Heritage Site by UNESCO, is one of Gaudí's main works.

Each of its rooms represents the eclectic legacy of the Catalan genius, but one of the most peculiar parts of the Palace is the roof terrace, an area of ​​more than 400 square meters decorated with curious chimneys covered with colored ceramics.